Daniel Mael of Truth Revolt has press credentials revoked and is barred from attending June National Summit in any capacity. 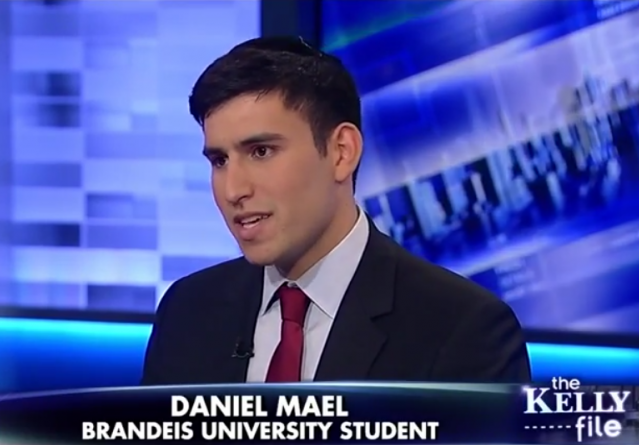 On April 28, 2014, I wrote about how J Street issues media Fatwa against its toughest pro-Israel student opponent:

[Daniel] Mael has been a relentless critic of J Street and its college chapters….

One of Mael’s articles even is featured in the trailer for the J Street Challenge….  Considering that The J Street Challenge is one of the biggest thorns in J Street’s side, it’s not much of a guess to believe that Mael’s affiliation with the movie is not popular at J Street…

I noted that J Street had issued a press statement requesting that media and bloggers “distance themselves” from Mael after an incident at Brandeis University, where Mael is a student.  Mael alleged that a J Street U member verbally abused him, a claim which was denied.

For whatever its reason, J Street corporate headquarters through its communications team got involved in this local dispute (emphasis added):

…  we ask that others in the Jewish community and media – even those who don’t agree with us politically – will distance themselves from this blogger and others with a history of conduct driven by malice and deceit.

While J Street and J Street U remain deeply committed to a vibrant and respectful campus conversation, there is a line that cannot be crossed. Unfortunately, some questionable bloggers and campus figures have consistently and consciously crossed that line. We will not tolerate harassment of our student leaders, and we see no reason for us to have any further interaction — on the Brandeis campus, online or in other venues — with those peddling in slander. We hope others will make the same determination.

Since then, two things have happened.

First, Mael’s prominence has risen, including an appearance on the Kelly File.  His criticism of J Street has not ceased.

Second, relations between J Street and its critics have frayed even further, with J Street losing a vote to join the influential Conference of Presidents of Major American Jewish Organizations.

Over the past six years, J Street has been subject to an unrelenting campaign of attacks grounded largely in lies, innuendo and guilt-by-association aimed at discrediting the organization and those who work for, fund and support it.

Rather than focus debate on substantive disagreements with the policy positions we take, some of our opponents have sought to discredit us personally and organizationally. We have, of course, made an occasional personal or organizational misstep, which has not helped, and all of us at J Street are acutely aware that, given the scrutiny we’re under, we have less than average margin for error.

A prominent Christian Zionist student, Chloe Valdery, wrote a response to Ben-Ami, also in The Times of Israel:

In this back and forth, and continuing recriminations, J Street has not forgotten its desire to isolate Mael.

After initially granting Mael press credentials on behalf of Truth Revolt to J Street’s June 2014 National Summit in San Francisco, the credentials not only were revoked, Mael also was told he was barred completely from the National Summit.

Here are emails provided to me by Mael reflecting J Street’s position as expressed by its Communications Director, Jessica Rosenblum:

My name is Daniel Mael and I am a reporter for TruthRevolt.org. I was wondering if you are issuing press credentials for your upcoming summit. Please let me know, as I’d like to attend and cover the event.

We will grant you a press credential to cover our national summit in June.

All individuals with press credentials will be held to professional journalistic standards. Please note that J Street reserves the right to remove anyone whose behavior disrupts the proceedings.

I wanted to circle back with you in order to make sure it is clear that what we wrote in this statement, particularly the parts about distancing ourselves from you and seeing “no reason for us to have any further interaction… with those peddling in slander,” also covers your request for credentials to attend the 2014 National Summit in San Francisco.

Are you only denying me press credentials or are you also barring me from the actual Summit?

Subject: Re: Press request for summit

I am doing both.

They granted and then revoked the credentials with no intervening communication. It amazes me that an organization that prides itself on dialogue is willing to viciously attack a student and function so childishly. The spin-machine that is J Street never ceases to amaze me. Although their dishonest organization has been rejected by mainstream Jewish Community.  I would welcome any J Street member into my Jewish community. It is leftist J Street that attacks members of the community to no-end. From Hillel president Eric Fingerhut to Malcolm Hoenlein of the Conference of Presidents, they are simply disrespectful and thuggish. I would love to engage in open dialogue with Mr. Ben Ami or a J Street U student. I think it would be tremendously productive and encourage open debate.

I have not yet received a response to my request for J Street to identify any other persons barred from the National Summit, and for it’s position on barring Mael.

Sounds like the young man had found the range and azimuth to target.

His fire flushed the enemy from concealment. Emphasis on “flushed”.

The speed with which it has become acceptable to silence, deny and punish speech is very alarming. Exposing the incidents seems to have no effect. Every day there’s another one. I hope somebody comes up with a plan to counter it soon.

“J Street is supported financially by tens of thousands of donors. George Soros and his family are one of the largest. The family has provided $500,000/year in support the past few years, or about seven percent of our budget.”

Half a million a year from the man who got his start selling Jews out to the Nazis? I’m sure J Street has Israels best interests at heart/sarc.

At age 14, Soros took the identity of a Christian (he’s Jewish), and helped the Nazis confiscate the property of Jews. That may be understandable for survival sake, but even today he has no guilt or remorse in what he did. He describes that time as the most exciting time in his life. That I find that disturbing

He may be of Jewish ancestry, but, he’s not Jewish in believe or spirit. He’s not even Christian, possibly not human in spirit.

Evil will pay all costs to protect itself.

Evil will take on a reptilian form in order to change its ‘colors’ (its pretense) and hide, waiting to attack others for its own consumption and self-preservation.

This perfectly describes George Soros and Harry Reid and a host of other ‘Progressives’.

In addition to Soros, a great deal of money comes from an Iranian front group in the US.

if j street’s statement as stated then directed by email @ an individual are true then a good lawyer has grounds for libel because to falsely accuse per quote “no reason for us to have any further interaction… with those peddling in slander,” of slander in writing is 2 libel and as such is defamation.

written libel is much easier 2 prove.

just saying, am not an attorney, this is not legal advice.

So J-Street are currently in a dispute with Mr Mael over his allegation that one of their members verbally abused him. Is it that extraordinary that they are asking him to keep away from their conference while they investigate?