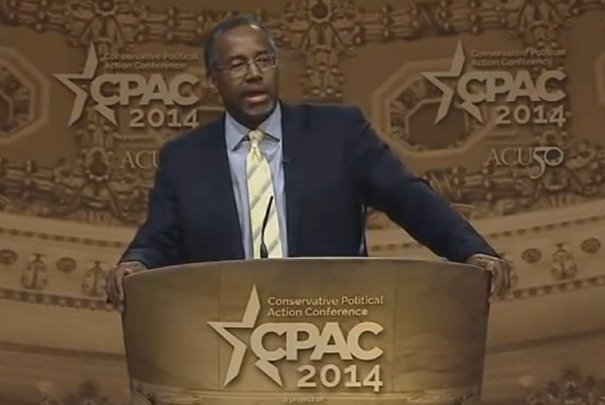 A better question might be should Dr. Ben Carson run for president?

It’s no secret that Dr. Carson enjoys tremendous support from American conservatives. When he spoke at CPAC in March of this year, the audience was sprinkled with signs which read “Run Ben, Run” but that doesn’t necessarily form the basis of a campaign. Then again, maybe it does.

Ben Carson is warming to the idea of running for president. Since the famous brain surgeon retired last year from Johns Hopkins Hospital, he’s been speaking around the country to enthusiastic audiences. And they’ve affected his thinking about seeking national office.

“Over the years, there have been many attempts to get me to throw my hat in the political arena,” Carson writes in his new book, One Nation: What We Can All Do to Save America’s Future. “I have been offered support from around the country and tremendous financial resources if I decide to run for national office. But I have not felt the call to run.”

Ben Carson tells Fred Barnes that he is, as Barnes puts it, “warming to the idea of running for president.” Everywhere he goes, he says, people are encouraging him to run: “And so many people tell me that, and so I think I’m starting to hear something.”

Dr. Carson is an impressive man, and it would be terrific to have a presidential candidate who could say “this isn’t brain surgery” and unquestionably know what he was talking about. He may, however, be making a mistake a lot of aspiring politicians do: overestimating how many supporters he has.

Dr. Carson is a very decent and smart man but it remains to be seen whether or not he’d make a good presidential candidate.

If he doesn’t run, I have a suggestion for the next Republican president which can be summed up in five words:

African American “leaders” loath Ben Carson and what he represents.
Carson is an honest black American who succeeded in his own merit and by his own effort.
The day African Americans start looking up to him, bozos like Al Sharpton will have to go preach to the seagulls under a bridge.

As much as I admire Dr. Carson, I am not in favor of starting at the Presidency. How about HHS as a first step?

Exactly. He needs to prove his mettle as does everyone who aspires to represent the People. If his interest is the presidency, then he would do well to start in a lower executive position (e.g. mayor, governor).

Pair him with a former governor, or someone with senior executive branch experience, and you’re in.

Dr. Carson is a great man, a man of intelligence and integrity. But I’m not sure he has the personality to be President.

Ben Carson can be Presidential with his Intelligence, Heart, Kindness, Determination. But lacking I think is Moxy. He would be damaged by those who have none of these attributes. He would be great heading up a Cabinet position. If it was in the right now, with his credentials, he would be just what the doctor ordered for cleaning house at the VA. I can see the slackards abandoning ship if they had to face him. Dr. Carson knows all the right questions to ask and would expect nothing less than a correct answer. No Smoke Blowing Allowed. Where as the current VA Dir. failed to listen to the VA doctors, Dr. Carson would have been on top of it.

Will he be told to check his privilege?