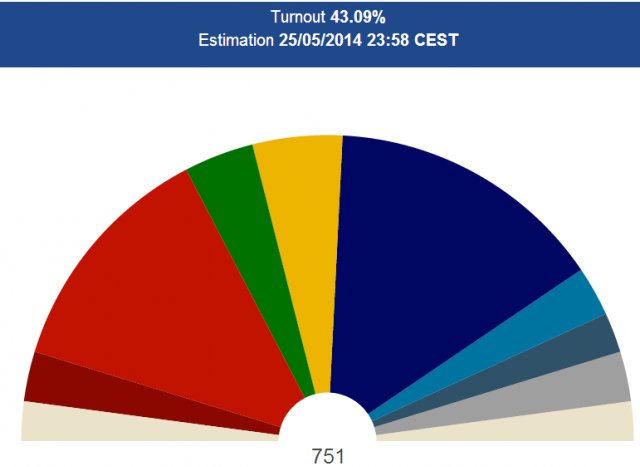 It’s too simple to say that “far right” or “fascist” parties did well in the European Parliament elections. It does seem clear that “Euroskeptic” parties on the right and left did well.

Seems to me that what you are seeing is the long-awaited centrifugal forces of the EU showing the inherent instability of trying to unite countries with such disparate interests.

Anti-immigrant sentiment also seems to be part of the equation in some countries, particularly France.

Here’s how The Wall Street Journal describes the outcome:

Anti-European Union and far-right parties posted strong gains in elections to the European Parliament in some countries on Sunday, tapping into voter anger over economic austerity and delivering a blow to institutions in Brussels, national governments and mainstream political parties.

Anti-EU parties won the biggest share of the vote in France—where more than a quarter of votes were cast for the far-right National Front—Greece and Denmark. They also made a strong showing in the U.K. and Italy.

Overall, centrist, pro-European parties are still expected to hold a broad majority of the 751 seats the new legislature, which decides on EU laws together with national governments.

But euroskeptic and anti-EU lawmakers could complicate passing measures on which mainstream parties are divided, including a planned free-trade deal with the U.S.

At the bottom of the post is a widget that reflects official results EU-wide for various parties (go here for results including by country).

In certain countries, the “right” certainly did well, most notably France. Here’s how The Telegraph describes today’s voting results in France:

In a stunning defeat for the European political establishment, exit polls forecast that the French Front National, which wants to leave the euro and the EU, would win 25 per cent of the vote, more than ten points ahead of Francois Hollande’s Socialists.

The victory means that Miss Le Pen’s Front National will increase its number of MEPs from three to 24 in an earthquake for French and eurozone politics.

“Our people demand one type of politics: politics by the French, for the French, with the French. They don’t want to be led anymore from outside, to submit to laws,” said Miss Le Pen….

In Britain, the Ukip surged, as described by The Financial Times:

It was not entirely out of the blue – but Britain’s three main parties were reeling on Sunday night as the UK Independence party appeared on track to sweep to a historic victory in the European elections.

Nigel Farage, leader of Ukip, was poised to pull off an achievement that no one would have predicted four years ago when his party won just 3 per cent in the last general election….

Ukip’s message of hostility to the EU and its open borders has struck a chord with swaths of voters across the country – particularly outside London.

The party looked on track to double the 16.6 per cent of the vote it picked up in the last European elections in 2009. In Yorkshire and Humberside it picked up three out of six seats.

With the Liberal Democrats on track to lose most or all of their 12 MEPs the party’s leader Nick Clegg faced a grassroots rebellion by more than 200 activists.

Mr Clegg had led an outspoken pro-EU campaign, only to find the party lagging behind the Greens in fifth place in some opinion polls.

The Conservatives were also feeling the heat as their candidates were beaten by Ukip in region after region as the results rolled in.

In Greece, anti-austerity leftists won big, although a neo-fascist party got 9%, via Bloomberg:

Syriza, short in Greek for Coalition of the Radical Left, got 26.5 percent of the vote yesterday, compared with 23.3 percent for Samaras’s New Democracy, according to an initial projection based on a count of 33.4 percent of ballots posted on the Interior Ministry website. Samaras’s junior coalition partner, Pasok, running as the Elia alliance, took 8.1 percent of the vote, the projection showed….

The Nationalist Golden Dawn party, whose leader and five other lawmakers are in prison pending trial on charges of running a criminal organization, was projected to jump to third place, with 9.3 percent of the vote, from a fifth-placed showing in general elections in 2012. The result gives them a projected three seats.

The Economist sums up:

All this said, the blunt reality is that Europe’s political fault-line is shifting from left–v-right to pro-Europeans against anti-Europeans…

For pro-Europeans, the relief is that Eurosceptics are split between left and right. Even on the right, they are divided among themselves, ranging from the euro-critical European Conservatives and Reformists, led by Britain’s Tories; to the anti-EU Europe of Freedom and Democracy (EFD), led by UKIP; and a more radical far-right alliance led by Ms Le Pen. Whether there are enough votes and parties on this part of the spectrum for all three to form parliamentary groups (requiring at least 25 seats from seven countries) remains to be seen. Mr Farage, for one, has refused to join forces with Ms Le Pen, citing the racism that he thinks present in the National Front’s DNA. Meanwhile, Ms Le Pen’s main ally, Geert Wilders of the Freedom Party, appears to have come fourth in the Netherlands, perhaps in part because of revulsion at Mr Le Pen’s Ebola comment. The Danish People’s Party, which came first, also distanced itself from Ms Le Pen, hinting it preferred an alliance with Britain’s Tories.

Nevertheless the Eurosceptics now have political momentum. Governments in Britain and France face an acute dilemma over how to respond, and the likelihood is that they will harden their stance on a host of issues, particularly immigration and EU enlargement. Pressure will rise for EU powers to be repatriated.

See, it’s just not as simple as some are making it out to be.

The UK and EU elections demonstrate why our leftists are rushing amnesty.

Wouldn’t it be funny if Europe woke up from the utopian nightmare before America? We’ll see how much longer the Fed can keep printing soma for them and us.

I live in Europe. My French, German, English and Romanian friends all tell me the same thing: People are tired of the EU not making progress. While things are commercially better than ever (common currency, freedom of movement, etc), there is simply “red tape piled on red tape” and it is hurting Europe’s ability to be competitive in the world marketplace.

Also, all of them admit that they have no allegiance to the “EU”. Even though they are young enough to have grown up in the EU system, they all demonstrate allegiance to their home countries only. If you are looking for tidal movement of politics, it is local as usual.

I wouldn’t be in such a hurry to call this a trend just yet. No European country could compete by itself against the rest of a remaining EU (well, maybe Germany). At the same time, the EU appears to be fracturing along the lines of whatever is happening in the home countries.

And Hollande is a twit. My French colleague told me it’s my fault – “We could have had Dominique Strauss-Kahn if it weren’t for the Americans”. Sarkozy is the likely beneficiary in the next election.

As America does not have “right-wing” parties of any appreciable size, I really only care about one thing –

Is the party anti-Semitic or isn’t it? Because for Jews in Europe, the issue is no longer immigration but emigration. And if you think that Jews in France are fine, you should talk to some of the countless Jews here in Israel who have fled France. (In many cases, they came to France from Moslem countries, former French colonies.)

Anyone have a breakdown of the various nationalist parties? To me it says a great deal over whether the party is simply nationalist, or actually racist.

The only think that will wake France up is if Canada and the US grant automatic refugee status to French Jews.

And no, I don’t think they should all be in Israel. I’m not aware we have any guarantees.

The guarantee is this: a remnant shall remain.

He doesn’t even want Jews from Israel to come here to visit or study, and you’re fantasizing about “automatic refugee status”?

On a side note: don’t be fooled by the media’s ubiquitous phrase “far Right”. It is just Newspeak for “STFU!!!” to people they disagree with politically.

There is zero evidence that the Western media has done any careful, honest investigation of Marine Le Pen, Ukip, and the rest. These individuals and groups may be saints, sinners, or something in between, but the majority of Western journalists are lying left-wing hacks.