Detroit Mom who fought off attackers with rifle starts trend

Detroit Mom who fought off attackers with rifle starts trend

“I wouldn’t want to take a life, but if it’s a threatening situation, you just have to do what you have to do” 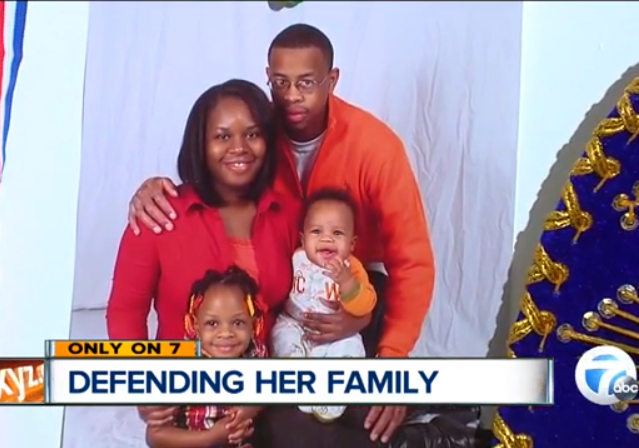 This is a follow-up to our story in February about the Detroit mom who used a rifle to fight off three attackers who kicked in the back door of her house, Rifle used by Detroit Mom to defend family is illegal “Assault Weapon” in NY.

The woman and her husband recently were interviewed by local television. She said she would do it again if she had to and urged others to defend themselves:

“I wouldn’t want to take a life, but if it’s a threatening situation, you just have to do what you have to do.”

She apparently has started a trend. According to the news reports, since the incident Detroit has seen a sharp rise in homeowners arming themselves and defending their homes.

That family oicture is da bomb! She’s got a husband, not just a “baby daddy,” as the morally bankrupt like to say, and two kids with her husband.

Let’s hope that armed self-defense is not the only trend she set in Detroit.

Obviously she is a KKK-loving global warming-denying racist Tea Party gun nut who wants to overthrow the government and ban birth control. That’s what our moral and intellectual betters at MSNBC believe, and they cannot possibly be wrogn.

Would be nice if someone taught her how to get rounds on target, though. 🙂

Spray-and-pray was enough THIS time. Plus, ammo is $$$, no need to waste it.

Think of the GREAT PR potential of the local NRA folks taking her under their wing and teaching her and the kids how to shoot!

Two people worthy of respect. Good for them. Lucky for the kids, too.

Detroit Police Chief himself has suggested homeowners arm themselves. He said cops can’t be everywhere.
One of the few top cops who is telling it like it needs to be said.
http://www.washingtontimes.com/news/2014/jan/6/editorial-eliminating-gun-crime/

Chief Craig served nearly three decades in the Los Angeles Police Department, where “it took an act of Congress” to get permission to carry a gun. That’s how he once thought things ought to be done. He was a standard-issue big-city police official. Then he moved east to become the top cop in Portland, Maine, one of the safest cities he had ever been in and where many people own guns.

Suddenly, an epiphany. “Suspects knew that good Americans were armed,” he says. Now in Detroit, Chief Craig credits the decrease in crime in part to the “a number of [concealed-carry permit] holders running around the city of Detroit.” If more Detroit citizens were armed, Chief Craig told a news conference last week, criminals would think twice before attacking them.
————-
Chief Craig sees the results firsthand of legal gun ownership. There have been 73 “justifiable homicides” in Detroit since 2011, and only 15 in 2013. Most of these, reports The Detroit News, involved residents such as 76-year-old Willie White, who fatally shot a man who broke into his home. His house had been broken into several times before he confronted and fatally shot an 18-year-old thug who had broken in in 2012. Mr. White told The News, “… these criminals would definitely think twice if they knew more citizens were armed.”

“Anyone who tries to harm my family, harm me or take away my liberty or my property!”

“No, just careful. Oh, and by the way, you are the one showing unnatural, baseless signs of fear of a law abiding American.”

Nice All-American family photo there. The only thing better would have been to include the dog.

Notice in the opening comments that newscaster Carolyn Clifford categorizes homeowners’ defense of their homes by “opening fire on intruders in [their] home[s]” as an “alarming trend.” Implied disapproval – and this in a city in which the police chief advocates law-abiding citizens arming themselves because law enforcement is incapable of doing its job.

That, and repeatedly referring to the intruders as “boys” as though they were just a few five-year-olds playing bad guys.