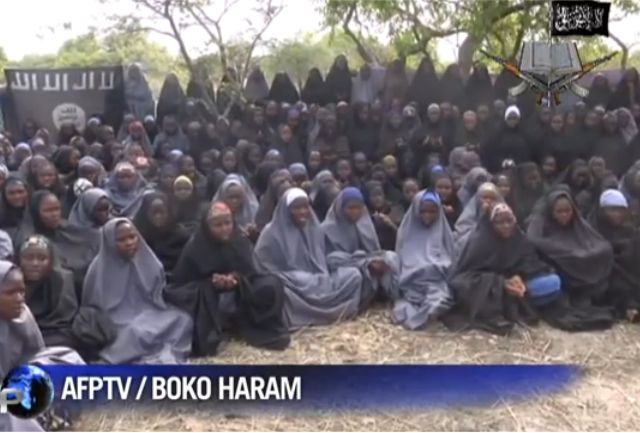 In a new video that claims to show some of the Nigerian girls recently kidnapped from a school in Chibok, a purported Boko Haram leader said the girls would only be released if exchanged for militant prisoners in custody.

Boko Haram’s leader said in a new video obtained by AFP on Monday that more than 200 abducted Nigerian schoolgirls would only be released if the government freed militant fighters from custody.

Abubakar Shekau made the claim in a 27-minute video, which he claimed showed about 130 of the girls who were kidnapped from their school in the remote northeastern town of Chibok nearly a month ago.

The girls’ disappearance has triggered global outrage, in part due to a social media campaign that has won the support of high-profile figures from US First Lady Michelle Obama to Pope Francis.

The militant leader said the girls shown in the video had converted to Islam and all were shown in Muslim dress, reciting the first chapter of the Koran and praying at an undisclosed location.

Boko Haram has made prisoner exchange demands before without success and Nigeria’s government again dismissed the request outright.

(AFP video embed is blocked, view video on YouTube or click the link in the video below)

At the time of this writing, it could not yet be confirmed if the girls in the video are in fact some of those abducted last month.

More description of the video from the NY Times:

The video shows dozens of girls dressed in head scarves and long gowns that cover their bodies but reveal their faces. They are praying and seated cross-legged in the type of scrubland that is pervasive in this region, not far from the Sahara Desert. One of the girls is shown reciting the opening of the Quran; three express allegiance to Islam; two say they had converted from Christianity.

The BBC reports that while some of the abducted girls are reportedly Muslims, many are thought to be Christians.

Militants stormed a secondary school in Chibok on April 14 and abducted 276 girls; 223 are said by police to still be missing, according to AFP.  Last week, the purported Boko Haram leader claimed responsibility for the kidnappings and threatened in another video to “sell [the abducted girls] in the market.”

Several countries have since offered some form of assistance to the Nigerian government in the search operation, including the United States and UK.

The search so far has centered on the Sambisa forest, with Nigerian troops being aided by advisers from the U.S., Britain and France.

Pentagon spokesman Col. Steve Warren clarified the U.S. presence in Nigeria for reporters  Monday, saying there are more than 50 U.S. military personnel and advisors based at the Nigerian Embassy to help “advise and assist” in the search for the missing girls. The teams have expertise in “communications, logistics, civil affairs, and intelligence,” Warren said.

“There are no plans to put additional U.S. military forces on the ground in Nigeria,” Warren added.

Nigerian officials on Monday disputed the identity of the man in the video, claiming that Abubakar Shekau is dead, but other experts doubt that claim, according to CNN.  Regardless, it’s unclear exactly where the Nigerian government stands on negotiation, given some conflicting news reports and statements.

In separate shots included in the 27-minute video, the group’s leader says he would release the girls only after imprisoned members of Boko Haram are freed, according to AFP. But Nigerian officials insisted Monday that the man in the video can’t be Boko Haram leader Abubakar Shekau.

He’s dead, they said, although experts doubt the claim, and videos going back to last year show the same man calling himself Shekau.

Whoever he is, Nigeria’s interior minister said, the country isn’t interested in negotiating a swap anyway, according to AFP.

But at a later briefing, the director of the National Orientation Agency, a government information ministry, said negotiations could be an option when it comes to rescuing the kidnapped girls.

When asked whether all options were on the table, agency Director Mike Omeri said yes.

“The government of Nigeria will continue to explore all options for the release and safe return of our girls back to their respective homes,” Omeri told CNN.

I hope to goodness that no member of the Brandeis faculty has the temerity to send any #saveourgirls retweet BS after what they did to Ayaan Hirsi Ali.

But that is very likely a vacant hope…

That is as equally likely to be a file foto . They look a little too comfortably muslim , rather than recent converts . It takes a large effort to dress like that uniformly . A give away is the way they have the headscarves .cocked toward the back off the head . That takes practice .

Alsp no one has piped up & said – that is my daughter . However I am going off to Nigerian sites to check . If I find different I will report back.

Nope . Nigerian commenters as of 11 hours ago have also questioned why no parents have recognised any . Many stated these girls are definite muslims in the process of reciting the Koran.