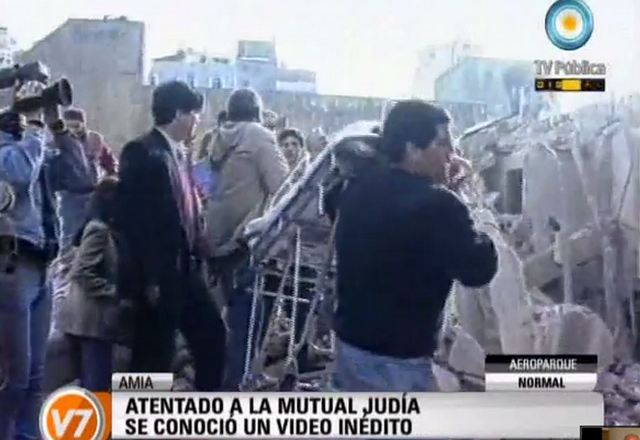 Early last year Argentina’s government reached an agreement with Iran to form a “truth commission” to investigate those who were responsible. The agreement was immediately controversy because, in the words of former Israeli Deputy Foreign Minister Danny Ayalon, it was “inviting the murderer to participate in the murder investigation.”

Last week, an Argentine federal court struck down last year’s “truth commission” agreement with Iran to investigate the AMIA bombing. Several senior Iranian officials and Hezbollah have been implicated in the attack that killed 85 people in that Jewish community center.

Thursday’s ruling declared the agreement unconstitutional and ordered Argentina not to go ahead with it. The deal had been delayed anyway by Iranian reluctance to move forward in implementing it. …

Israel and world Jewish groups had denounced the “truth commission” deal with Iran, calling it a diplomatic win for Tehran that offered no benefit to Argentina. The deal would have let Iran review Argentina’s investigation into the bombing.

Alberto Nisman, the prosecutor who took over investigation of the case, established responsibility to the highest level of Iran’s government. Among those implicated were then President Ali Akbar Hashemi Rafsanjani and Iran’s previous defense minister Ahmed Vahidi. Vahidi and intelligence officer Moshen Rabbani were among five Iranians who were flagged by INTERPOL for arrest in the case.

While current Iranian President was a member of the group that ordered the attack, Nisman told David Horovitz of the Times of Israel last year that Rouhani was not present at the meeting where the attack was planned. An English version Nisman’s indictment is here (PDF).

An op-ed in the New York Times at the time of the Argentine-Iranian agreement accused Argentina’s government of doing “an about-face on terror.”

The problem is that any recommendations by the commission would be nonbinding; moreover, some of the suspects in the attack are now high-ranking Iranian officials — including the sitting defense minister, Gen. Ahmad Vahidi — and therefore untouchable. Indeed, Iran has repeatedly refused to cooperate with Argentine investigators and ignored international warrants for the arrest of senior Iranian officials believed to have taken part in planning the bombing.

Mrs. Kirchner’s decision to abandon Argentina’s longstanding grievances against Iran is particularly galling because it comes just weeks after Bulgaria, another country victimized by Iranian-sponsored terrorism, accused Hezbollah of staging a suicide attack on Israeli tourists in the Bulgarian town of Burgas last year. That attack, like the 1994 bombing in Buenos Aires, was part of a shadow war against Jewish civilians across the world. Bulgaria’s government, unlike Argentina’s current administration, decided to stand up to Hezbollah and forthrightly accuse it of the crime.

While the court’s ruling was apparently not about the substance of Nisman’s charges as much as about the government overstepping its bounds, the decision serves as a reminder that no matter much governments try to overlook it, Iran is a major destabilizing force in the world.

Last year, the State Department tried to downplay Iranian involvement in international terror, but in the face of criticism and a wider ranging investigation by Nisman into Iran’s infiltration into South America decided to take another look.

This year’s State Department report on global terror “singled out Iran as a major state sponsor of terrorism that continues to defy demands to prove that its atomic ambitions are peaceful — even as Washington pursues negotiations with Tehran over its nuclear program.”

Why would the State Department downplay the long obvious Iranian role in global terror? Was that part of Obama’s deal of extending an open hand to Iran?

Why did Pres. ScamWOW turn his back…very conspicuously…on a real pro-freedom up-welling in Iran as one of his first acts as “leader of the free world”?

That, and a few other things, like killing our space weapons programs, should have told us all who he was in the opening days of his presidency. If any doubt remained, or anyone failed to read his very odd “biographies”.