On technical grounds that leave District Court another opportunity to issue the injunction.

Late this afternoon the U.S. Court of Appeals for the 7th Circuit issued a stay of the injunction, on procedural grounds which leave the District Court the opportunity to reinstate the injunction.

The issue for the appeal was that a “Notice of Appeal” of certain court rulings had been filed prior to the injunction being issued.  Once a Notice of Appeal is filed, it moves the case automatically to the Court of Appeals and the District Court no longer has jurisdiction, unless certain exceptions are met.

So the Court of Appeal basically said the District Court Judge didn’t have the case before him anymore, and couldn’t issue the injunction.

After 24 hours of legal maneuvering in a politically charged investigation of Gov. Scott Walker and his allies, an appeals court late Wednesday handed prosecutors a victory, preventing for now the destruction of evidence from the case.

The three-judge panel of the 7th Circuit Court of Appeals in Chicago stayed U.S. District Court Rudolph Randa’s preliminary injunction from Tuesday stopping the John Doe investigation, saying he had overstepped his authority. The appeals court ruling also said Randa cannot order prosecutors to destroy evidence they have collected in the five-county probe.

Here’s the key part of the Appeals Court ruling:

Apostol v. Gallion, 870 F.2d 1335 (7th Cir. 1989), holds that, once a litigant files a notice of appeal, a district court may not take any further action in the suit unless it certifies that the appeal is frivolous. The district court failed to follow that rule when, despite the notice of appeal filed by several defendants, it entered a preliminary injunction. This court accordingly stays the injunction, and all further proceedings in the district court, until the judge has ruled definitively on the question posed by Apostol.

If the district court concludes that the appeal is non-frivolous with respect to the complaint’s request for injunctive relief under the doctrine of Ex parte Young, 209 U.S. 123 (1908), then this stay will continue in force until this court has resolved the appeal on the merits.

Whether or not the district court determines that the appeal is frivolous, the portions of the injunction that require defendants to return or destroy documents will remain stayed as long as proceedings continue in this court.

According to the Journal Sentinel, the targets of the probe already have asked the District Court Judge to make the necessary finding that the appeal is frivolous.

UPDATE 5-8-2014: Here’s the letter filed after the Court of Appeals ruled, asking the District Court to certify the appeal as frivolous and to reenter the injunction: 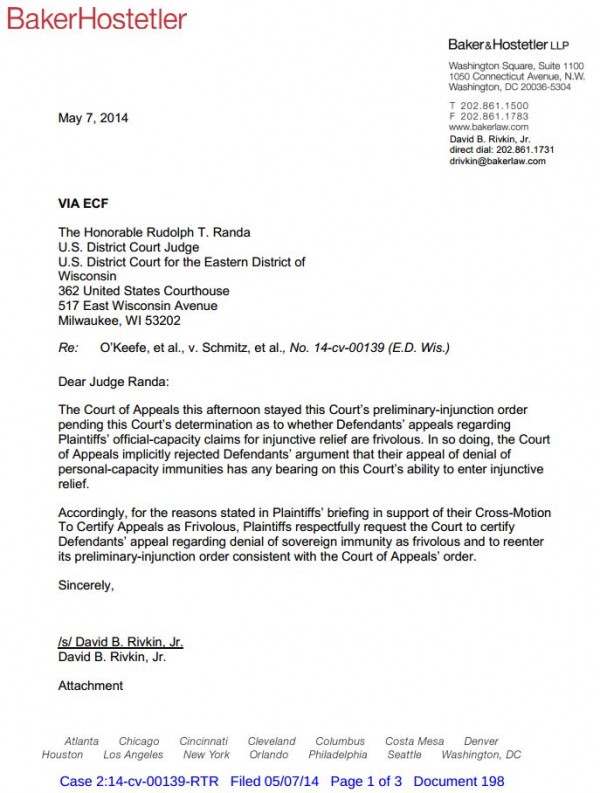 I’m not understanding. So the ruling is currently in limbo.. Depending

I’m not exactly a low info voter, but I have no clue what the outcome means.

Basically, the Judges found a technicality that allowed them to overrule the injunction in such a way that they avoided ruling on the merits of the case.

Judges do this all the time when they are too afraid to take a stand that might offend the politically connected.

How can they appeal a ruling before it’s made? The appeal should be rejected and the persecutors sanctioned and disbarred.

The Federal District Court did impose a preliminary injunction, which can be, and is here, an exception to the rule that appeals courts only hear final rulings. One reason that appeals courts sometimes hear special appeals at this point is when it would be too late to hear an Appel of the ruling after the final verdict. In this case, as I understand it, the lower court judge ordered the information already collected to be destroyed, and that could not be undone if the defendants won on appeal. Just conjecture w/o having read the opinion.

“despite the notice of appeal filed by several defendants….” My shoot-from-the-hip guess is that because “several defendants” filed an appeal from an earlier order, that deprived the District Court from jurisdiction to do anything else without first finding the appeal was frivolous.

This is kind of “appeals court tennis”.

When the prosecutors filed an appeal over something, and at some point in the past, it put the trial court under “king’s x”. Things stop, or are “stayed”.

One thing the trial court can do to lift the stay is to rule the appeal frivolous (the prospect of abuse seeming too apparent, IMNHO).

Anyhow, IF the trial court certifies to the appeals court that the appeal is frivolous THAT does not mean we’re done and can all go home. The prosecutors can renew their appeal, or appeal part of an order, or file a new appeal on different grounds.

The practical effect here is that the witch-hunters don’t YET have to destroy or return evidence they’ve developed. Which doesn’t really change much.

The prosecutors were likely to have appealed the trial court’s finding in any event, with the same practical effect…they keep stuff for a while.

If this seems confusing…and it certainly DOES…we can all empathize with Mark Steyn. Plus, it is SUPER for billable hours!

The Circuit Court of Appeals must wait for the District Court to re-issue its Injunction.

But then again the Circuit Court can do what it wants, because it can.

Begging the pardon of our esteemed host……

This is why the general public ends up with such a low opinion of the legal system…. there is no “straight dealing”… it’s all manipulation and sleight of hand. Even when you win, you lose.

And eventually, you will run out of money to defend yourself.

But, really, all this procedure is rationally tied to an effort to protect due process rights.

It was never intended to be arcane. It just sorta growed that way…