A commencement speaker with a difference: Robert Frost, 1956

A commencement speaker with a difference: Robert Frost, 1956 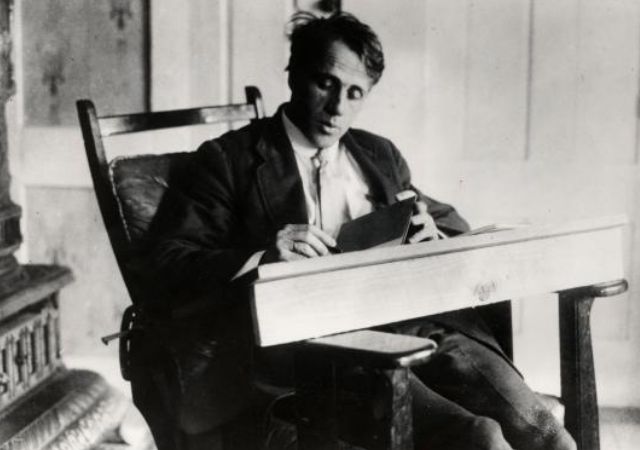 The recent news about commencement speakers being scared away or disinvited or staying the course despite adversity or giving students a tongue-lashing might make you want to return to a commencement address from an earlier time.

That time was 1956, nearly a full sixty years ago. The place was Colby College in Waterville, Maine, and the speaker was the poet Robert Frost. What he had to say to the students there may surprise you. If you’d like to read his whole speech, go here, but the part that seems most interesting for today is the following portion, which I’ve condensed into short excerpts from the original:

Is our dream, our American dream—that I think Dreiser thought was “An American Tragedy”—is that dream over? Are we on a new dream?

Or is the Constitution something that isn’t performing—a sort of vanishing act, fading as we watch it, and turning into something else? When they call it “a living document,” that means they can have it any way they want it for this generation. That’s the danger…

Let me say what I’d do about it if I were you. I’d go back and read some of the “Federal Papers.” I’d go back and see whose dream it was. Plenty of time, you’ve got it all before you…

Another thing that I pick up…about freedom and equality. It occurred to me not so terribly long ago—rather recently—that the more equality I have, the less freedom I have. These two things balance each other.

If one party leans a little more towards the freedom—freedom of enterprise, freedom to assert yourself, freedom to achieve, freedom to win—the other comes in with the tone of mercy and says: “Let’s not let anybody get too far ahead. Let’s have a Sherman Act or something, to keep people from getting too rich.” That’s toward the equality, the fraternity of it.

Can you imagine any poet giving a similar commencement speech today? In fact, I can hardly imagine anyone giving a similar commencement speech today, except at a conservative college. Frost also assumed a certain context for his listeners in the Colby graduating class of 1956—for example, that they knew something about who Dreiser and Paine and Madison might be, and he assumed that what these men said and thought might actually interest and inform them. I’m not at all sure that would be the perception now.

Here’s what he had to say about his attraction to teaching, from a lecture he gave in 1961 at the University of Minnesota:

I’m almost as interested in education as I am in poetry…I’ve had so much to do with education that I say I’m like some monkeys that Darwin tells about.

He showed them a bagful of snakes. And they looked at ’em and and shrieked and threw up their arms and fled. But they couldn’t stay away. They kept coming back and and looking in the bag at the snakes and throwing up their arms and shrieking and running away again.

That’s the way I’ve done for education, about the last fifty, sixty years—sixty, sixty-five years. And here I am again.

Frost died a little over a year later, at the age of 88.

Clearly just another rant by a dead white man.

I have a book of Robert Frost’s poetry right here on the bookshelf above my computer; It’s within arms reach as I type. I already knew he was a great poet, but I had no idea he was a conservative as well. Thank you Neo for enlightening me!

Non-political with principles to guide the graduates to use their knowledge/education for good.

…and miles to go before we sleep…