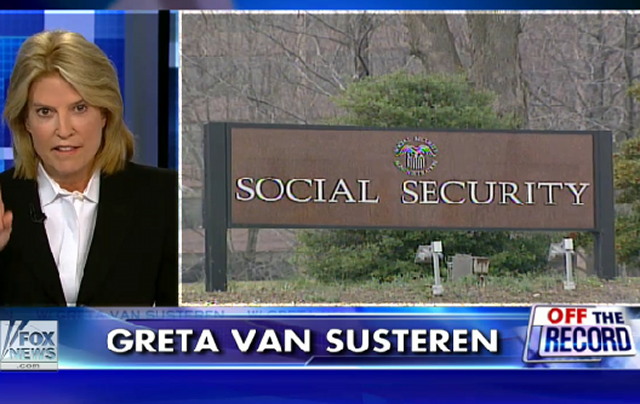 The debt in question wasn’t incurred by the woman, it was another member of her family and it was the result of an overpayment. The blame lays with the Social Security administration.

Marc Fisher of the Washington Post reported this week…

A few weeks ago, with no notice, the U.S. government intercepted Mary Grice’s tax refunds from both the IRS and the state of Maryland. Grice had no idea that Uncle Sam had seized her money until some days later, when she got a letter saying that her refund had gone to satisfy an old debt to the government — a very old debt.

When Grice was 4, back in 1960, her father died, leaving her mother with five children to raise. Until the kids turned 18, Sadie Grice got survivor benefits from Social Security to help feed and clothe them.

Now, Social Security claims it overpaid someone in the Grice family — it’s not sure who — in 1977. After 37 years of silence, four years after Sadie Grice died, the government is coming after her daughter. Why the feds chose to take Mary’s money, rather than her surviving siblings’, is a mystery.

I smell a test case, to see how the public reacts. If little reaction, then full speed ahead on other old accounts. The fed gov is a hungry beast.

I can’t see how this possibly holds up in a court of law, though.

Congress did this to the poor woman. “The farm bill that passed in 2011 lifted the 10-year statute of limitations on debts owed to the feds.”

Another bill that nobody read, passed with republican support…

No shit. Well, isn’t that lovely. Either those who supported the bill knew it would have this result or they didn’t. Neither is defensible.

I can understand lifting the statute of limitations on debts that are owed, but it seems to me that the debt must be provable and also charged back to the person that actually owes the government.
To find some poor sod related to the person that may or may not have been overpaid and snatch the funds is, as Greta stated, a theft.
If an agency doesn’t have the documentation to prove an outstanding debt, Congress needs to bind their thieving hands.
I don’t even want to think about where this could go.

That bill only affects debts incurred after it was passed, but most debts to the federal government do not have any limitation at all. They are still collecting student loans from over 40 years ago.

But they should at least be able to demonstrate that the person they are assessing, if not the debtor, received at least the amount assessed from the estate of the debtor. This business of just seizure with no explanation should be outlawed.

It does raise some due process issues. But the Courts are the governments Courts.

I have a question about statutes of limitations. If a person is in the clear because the time has run out, does he again become subject to penalties for the same cases if the time is extended or does that extension only apply to cases still within the time period?

I know the answer might differ in civil and criminal cases but it does carry an odor akin to double jeopardy.

Good question. This sounds like an ex post facto law to me. But of course the feds are counting on the fact that the woman has no money for a legal defense.

Right. And these are amounts too small to get a lawyer eager to take the case.

You are right, they can’t extend the statute of limitations on any that have run out. But there were only certain categories of debt to the feds that had limitations. Most do not and never did.

They should certainly be required to prove the survivor they are charging for the debt received at least that amount from the estate, though.

The crux here is that because the overpayment is caused by a calculation error at social security; There is very little likelihood that the original recipient was ever notified.

I’d sure like to have the details on “the farm bill” hashed out a bit (Public Law 110-246, §14219). The identity of the doofus who intro’d the amendment which wiped out the limitation on actions should (hopefully) be discoverable. That person/those persons should be publicly identified and subjected to the full weight and force of public scorn. This is unconscionable!

I know that the current political climate is fragile at best, potentially incendiary at worst what with the “dust-up” at the Bundy Ranch in Nevada threatening to become something none of us want, but how much more of this crap to we have to take? The mere thought of some of the implications of this new “policy” takes me close to swooning.

Got to go now. My hair burst into flame and set off the smoke alarms. The neighbors heard and I think I hear Engine Company 1649 a comin’ this way, driver leanin’ hard on the Q…

The identity of the doofus who intro’d the amendment which wiped out the limitation on actions should (hopefully) be discoverable. That person/those persons should be publicly identified and subjected to the full weight and force of public scorn.

So the amendment was snuck in there in the House sometime between 7/23/2007 (reported out of the House Agricultural Committee), and 7/27/2007 (when it passed the House).

I don’t have time right now, but someone could search the Bill Summary and Status With Amendments to find out.

Maryland has a pro-bono fund, which would seem to be applicable, here. A lawyer could get paid for handling this case.

“Now, Social Security claims it overpaid someone in the Grice family — it’s not sure who — in 1977.”

seems legit… who could possibly object to this?

I don’t see what relevance the statute of limitations has in this case. Even if SS did overpay somebody in that family, so what? Since when are children liable for their parent’s debts? Moreover, the estate has presumably been probated, and as I understand it all creditors of the estate must speak out at that time or lose their right to action against it (and by extension, the heirs of the estate). You knew or should have known, did nothing, so tough luck.

This incident is another example of why our Founding Fathers fashioned a Constitution and the Bill of Rights that restricted and divided the power of government. They knew from experience and history the results of absolute power. What was a slow erosion of our freedom under previous Administrations has become a life threatening, flesh eating infection of the body politic under the power hungry leadership of Obama. No rights and no freedoms are safe under the present regime but replacing him with another “Progressive” candidate (Jeb Bush or Christie) is hardly a solution.

I thought the foundation of US law is the individual is responsible for his or her actions, not the children or other relatives. And once a person has died and the estate settled action could not be taken against the following generations, unless they actively participated in criminal actions.

One thought — this is the IRS doing this. I also notice the daughter Sadie Grice appears to be black. Is it possible the IRS has discovered either Mary Grice or her daughter Sadie committed the sin of sins and voted Republican?

IANAL, but apparently the government can recover money owed from the Estate of the deceased. Example: How Medicaid Recovers the Cost of Long-Term Care From Your Estate After You Die

Medicaid will often pay for nursing home care even for those who have assets that could be used to pay for care. This is possible because Medicaid does’t count assets such as a house or car (these are called noncountable assets). But after the person’s death, the state Medicaid program can try to collect medical costs from the deceased person’s estate. This is called “estate recovery.”

True, but didn’t the mother die years ago? I don’t think Medicare/Medicaid can recover money after the estate has been finalized. “You snooze, you lose” is a basic feature of our legal system.

I believe that they can seize money that is already under their control (Maryland’s cooperation in this I don’t understand) without due process. I don’t believe they can seize, garnish wages or apply liens without having afforded the debtor due process. This is also how the O’care penalty seizure would work.

I don’t believe they can seize her SS check without due process as that is written into the SS laws.

As to it being a dry run, that may be as this is how they will enforce the O’Care penalties (Thanks Traitor John Roberts) whenever they begin to be assessed.

This is typical IRS threats, legal but questionable tactics and the use of the bureaucratic process as part of the penalty and the anti-incentive to do anything about it.

It’s just not worth trying to fight for justice.