The most vicious attack on Hillary

The most vicious attack on Hillary 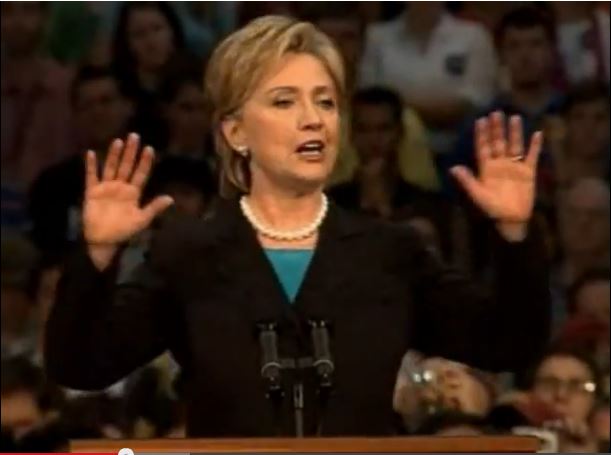 On the assumption that Hillary will be running, it’s going to be interesting to see how liberals who attacked Hillary in 2008 will say, “that was then, this is now.”

One particularly nasty attack on Hillary was to accuse her of being a White Power advocate and using Klan talking points.   That line of attack, routinely and falsely used against Republicans, seemed to reflect Bill Clinton’s complaint that the “race card” was played against Hillary.

The attack appeared at the liberal website The Daily Banter from a liberal blogger who works for Media Matters but blogs both at Media Matters and independently. 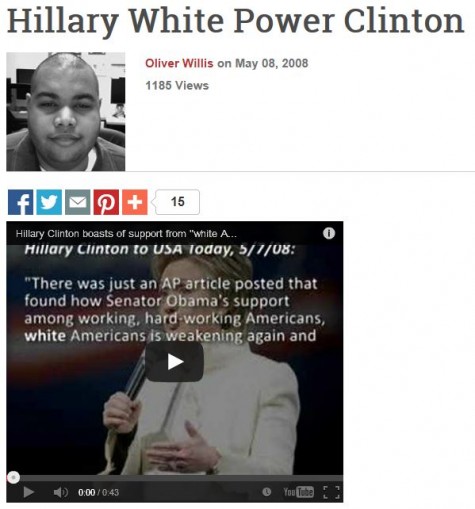 Congratulations, Hillary Clinton, you win the prize for the first Democratic Bigot Eruption since I’ve been keeping track of this. Even professional haters like Pat Buchanan and his ilk aren’t so balls-out about racism. You’ve been getting your ass handed to you and especially among black voters. This shows me once again that we – who are apparently lazy and shiftless non-Americans based on your definition – have yet again been a leading indicator.

There was maybe a slight chance Barack Obama might have been pushed to pick you as his running mate, but we can’t have someone spouting Klan-style talking points on the ticket. Heck, there’s a good shot with language like that you won’t win back your senate seat in 2012. I mean, a lot of those apparently lazy and shiftless non-American blacks helped you to win and they’d just as soon vote for someone else in the primary or the Republican in the election rather than someone echoing Bull Connor’s language.

UPDATE: Thanks for the link Americablog, and to make clear what I consider Clinton’s Klan-style talking point is her assertion that the hard working Americans are white Americans. That’s what I take offense to, and I don’t think you have to be black to feel that way.

Ah the dangers of speaking extemporaneously. Frued is alive and well and living in your head.

A “broad based” coalition sounds sexist to me. I have been microaggressed upon.

“What Difference, At This Point, Does It Make?” White or black? An Ambassador Slaughtered or a night on the town? Fast or Furious? Truth or Lois Lerner?

Many white leftists flourish by exacerbating racial division. Should America have a race war (heaven forbid), those people will be in for a nasty surprise if their side wins while they’re still alive.

An essential trick to prospering by ruining your country is to not be around when the chickens come home.

I dunno, gs. Ideology seems to trump color on a regular basis.

Collectivist white race-baiters are typically supported over “uppity” members of victim-classes who have the temerity to leave teh Plantation.

Now, in a true Reign Of Terror scenario all bets are off.

IMHO a civil race war is very very improbable in the foreseeable future—though back when the century turned, if you’d told me where the country would be today, I’d have considered it beyond ridiculous—so the following is way hypothetical: If nonwhites won such a war, I doubt they’d allow a numerically disproportionate share of the country’s wealth to remain in the hands of their white elitist collaborators. A Reign of Terror scenario would be entirely plausible.

(Yes, I’ve really gone off into neverneverland. Pls note that my parents were refugees from an area where people carried ethnic hatreds for centuries, and carrying such hatreds could be considered virtuous. I am appalled and furious to see that poison sprouting—no, being cultivated— over here.)

Either we have people trying to foment exactly that, race and class warfare, or we have a pack of idiots clawing for power. Or both.

Liberals will demand a woman for President, but the candidate must have true “progressive” root — not the watered-down, southern liberalism of Sec. Clinton. And liberals will want someone of color and younger, too.

Hillary is out.
Sen. Elizabeth (“High Cheekbones”) Warren is in.

The shock troops are just clearing the way for Michelle’s candidacy.

What will it take to get that woman to go away and take her sorry excuse for a hubby with her?

I hate that honky biatch.

Next Obama will be calling her a “typical white person”.

It will be interesting, in a debate, to see if Princess Warren asks if Hillary allowed Ambassador Stephens, a member of the Chinook tribe of Indians (http://waa.ai/4EQe) , to die because he was an Indian or because he was gay.

OR was it because he understood 1 million times MORE statecraft than did Hill-larry…?

Perhaps a combination of all three…???

“Well, shame on you, Hillary Clinton”

Oliver Willis is the poster boy for Affirmative Action in the Blogosphere. He is permitted – nay, encouraged – to spew forth all his far-left and racist nonsense. If he were a white guy, he’s be unemployable.

Don’t worry, he’ll be saying anybody who disrespects Hillary/any Democrat this cycle is racist. Bet on it.

The left is already moving to protect Hilary (and Kerry). The IRS is on it: they’re squashing non-profits that make comments about Hilary, deeming them an attack on a “candidate”, which is prohibited political speech when done by a non-profit. Never mind that neither she nor Kerry are a candidate for any office.