The Anti-Israel Cultural Revolution at Vassar

The Anti-Israel Cultural Revolution at Vassar 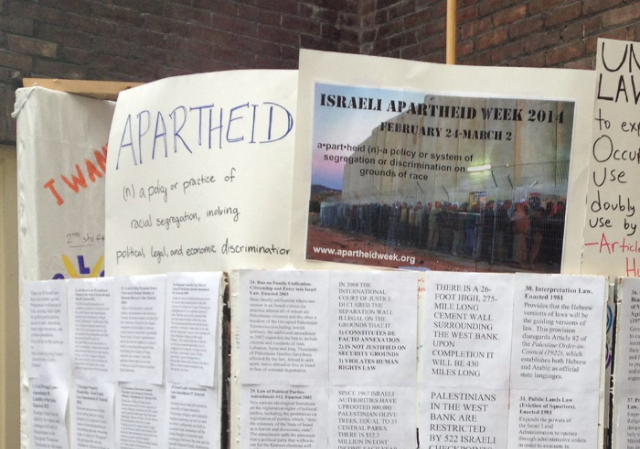 Vassar College saw an ugly event take place in early March in which two professors were the subject of protest and ridicule because they taught a class that involved travel to Israel and the West Bank.  One of the professors was forced, along with her students, to walk through a line of protesters holding posters and handing out leaflets calling on students to drop the class.

The details are set forth in my prior post, Anti-Israel academic boycott turns ugly at Vassar.

The two professors involved have confirmed the accuracy of my report: 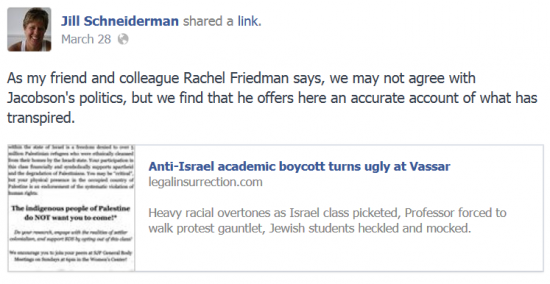 An “open forum” was organized by the Vassar administration focused on the “ethics” of the class trip, and opened with a call by a Professor of English for the crowd to disregard “cardboard” notions of civility.

The crowd obliged, mocking and deriding the professors, Israel and Jewish students who stood up in defense.

… I was knocked off-center by a belligerent academic community dedicated to vilifying anyone who dares set foot in Israel.

Philip Weiss of Mondoweiss website, who is anti-Israel, also was stunned:

As Schneiderman said in her blogpost, rage against Israel was the theme….

…. the spirit of that young progressive space was that Israel is a blot on civilization, and boycott is right and necessary. If a student had gotten up and said, I love Israel, he or she would have been mocked and scorned into silence. Or bedevilled by finger-snapping—the percussive weapon of choice among some students, a sound that rises like crickets as students indicate their quiet approval of a statement.

I left the room as soon as the meeting ended. The clash felt too raw, and there was a racial element to the division (privileged Jews versus students of color). Vassar is not my community, and I didn’t want to say anything to make things worse.

I would have been skeptical about the little bit of reporting I’ve seen about this episode in more rightwing news media, except that it was confirmed by Mondoweiss, who was there. Jill Schneiderman, a professor of Earth Sciences at Vassar College was recently called to give public account about a planned trip to Israel and the West Bank to study water issues. After her classroom was picketed and her students intimidated, and she was basically called before “open forum” on the ethics of political activism, where Jewish students who spoke out were heckled by the large crowd of some 200 students (and faculty). Is this what BDS is going to look like? A kind of public shaming reminiscent of the Cultural Revolution? No “cardboard civility” at Vassar. And where’s Open Hillel? Even the intrepid anti-Israel, anti-Zionist Mondoweiss found the incident “unsettling.” He maintains that the ”belligerence might be necessary to a solution.” My bet is that this kind of hostility is going to rip out the guts of a university to no good effect. Kudos to Professor Schneiderman.

I think that’s right, and it’s happening on many campuses, often encouraged and with the support of faculty.

Where are the faculty and administrators at Vassar standing up and speaking out against what happened at the Cultural Revolutionary Open Forum?

Imagine if the raw crowd vitriol that night had been directed at a different group.

There would have been campus-wide teach-ins and a self-examination of what Vassar had become.

But since it was directed at Israel and its supporters, particularly Jewish students, all we hear are crickets.

Yes, these people cannot even see that they are the very thing they criticize in others.

The same conduct toward anyone besides Jews would bring charges of bigotry, and rightly so. But they howl when informed of their antisemitism.

Don’t these people believe in microaggression?

The danger they pose grows, but until more of the populous is exposed, it will continue. It still needs to get worse before it can better.

Don’t these people believe in microaggression?

Nothing so picayune. They’re into macroaggression, and a mere Two-Minute Hate isn’t enough for them.

This is liberal fascism in action, by real brownshirts out of uniform.

They need to be expelled, and the Vassar administrators who fail to act need to be fired as well. An educational institution this is not.

Two things surprise me about this.

1) I never thought flagrant, public expressions of anti-Semitism by sizable groups of people would ever take place in my lifetime after what happened in recent history. It just shows you how delicate society is and how lightning-fast things can change.

2) How can these professors be surprised? Where have they been? Some seven or eight years ago when I was a grad student in geography, I had an Israeli student in a few of my classes. He had an advanced degree in economics from an Israeli university, but he wanted to become a professor of geography.

During one seminar a student from South America started the usual America-and-Israel-are-the-cause-of-all-the-world’s-problems blame game, and a few of the usual suspects (students of color taught to eat, breathe, and sleep grievances and to blame others for all their problems, real and imagined) started to become a trained-seal chorus.

He and I shut them down. (He looked very surprised at first that a non-Jew in this setting was on his side.) We didn’t shut them down by raising our voices or calling them names. We responded with point after point which they could not answer. He finished with a flourish, gently berating them for badmouthing his adopted home, America, for which he expressed his love and gratitude.

Again, where have these teachers been? It’s been this way for years (but, perhaps it’s only become worse).

This Israeli student was simultaneously a lecturer for our department, teaching undergrad introductory geography classes.

Speaking of “cardboard civility,” he told me that in one of his classes, a student started railing against “BusHitler.” He told the student he would listen to what he had to say, but that he insisted the student refer to the then president in a civil way, as President Bush, and not as BusHitler. The student refused, and he again insisted he would listen to all opinions, but only if they were expressed with manners of civility, and the angry student finally stormed out of his class.

These punks can’t do “cardboard civility,” something most parents teach their young children.

My guess is that these students actually learned a lot of this from their parents, if only from being taught that they are special snowflakes, and therefore nothing they do can be wrong. If you can do nothing wrong, why would you need to learn civility, cardboard or otherwise?

There is certainly no certitude in this world that comes close to matching that of these infuriatingly immature, young “adults.”

Yes there does. It is the certitude of their high school teachers. Then, there are the principals at all levels with their “no tolerance” policies.

This [email protected] is not necessarily coming from the families and parents of the children.

I’ll agree up to a point. The high school “teachers” know what they are doing. These kids are just true believers.

Also, it’s the parents’ job to counter all the crap their kids “learn” outside the home with the truth.

I do it constantly. Our kids are independent thinkers with civility, manners, and, above all, a sense of humor.

Aw, come on, LHC, it’s been happening at CA state universities for years! The MSA’s been doing it brazenly, and the administration has not been setting them down. Our institutions of higher ed are taking ME money. This is the end result. These profs are just singing for their supper.

This is too eerily similar to what happened at the universities in Europe during the late 19th and early 20th centuries, which of course culminated with the horror of fascist Nazi Germany and the “final solution.” When the Nazis rose to power, the first purged – before most horrors began – were the university professors, who would have perhaps been able to influence and stop their evil intent, their “master plan.”

The anti-semitism at universities of that era was well-documented; virulent and visceral, reminiscent of the specter of that same evil rises at Vassar.

Do they even realize they are doing this? Sadly, I believe they do – they revere Mao and Stalin, icons of the Communism that was actually totalitarian fascism, with an atheist Marxist twist.

It will only stop when rich, privileged mind-numbed “progressives” stop sending their children to that revered, yet woefully lost institution. Or when administrators awaken from their self-induced delusions of this dangerous, hateful cancer that passes as leftist ideology.

Which will it be – either one, both…..or neither?

Do you know they are still teaching about the joys of communism in the high schools here?

I was shocked to hear one of my cousins wax poetic about the aims of communism and how much it has to offer, conceptually. The kid has a good heart and a decent mind, but I could tell his phrasing was not his own. He, of course, was engaged in intellectual play at being edgy, but when I asked him a few key questions (Like, “How would you resolve the question of “who decides?”) it was clear that the presentation to him had been lop-sided, to say the very least. He’ll be fine eventually, but I do wish the english department would teach Orwell along with Marx.

Yes. They are thugs, mobsters, emboldened by the growing thuggery in society at large, but especially by our Thug in Chief and his Minister of Justice who won’t prosecute thugs.

The only solution for universities is to be defunded. We must get the Federal gov’t out of subsidizing the counter culture that festers in the ivy halls.

Another thing, tangential to this BDS on camups issue – but related, I believe – is this study I saw linked on Drudge Report:

To me this article screams out: a scientific way to ID a person’s ideology, aka “the enemy,”…to what end? In order to target them, perhaps? Just as eugenics was used against the Jews and other “undesirables” by the Nazis, Communists, and loons like Margaret Sanger (the founder of Planned Parenthood), this type of “scientific research” smacks of having a hidden agenda.

Very scary – science being used to determine a person’s ideology, that your ideologlogy is physiological, even genetic…………

More likely a simple way to justify purging the “heretics”.

The human and civil “rights” activists are nothing if not selective.

A quick google found that about 20% of the Vassar students are jewish. Jewish parents need to pay attention and that percentage needs to drop.

No, that percentage’s parents needs to go to the front office and tell TPTB at Vassar what needs to be done first. THEN, the “or else”.

Not gonna happen, innocent bystander…a too-significant portion of the Jews who send their kids to Vassar are, like the Jewish Prof. Schneiderman, leftists (we could call them JINO’s) for whom the likes of Prof. Jacobson are “Unclean! Unclean!” They probably think they’re getting their money’s worth.

Why does Schneiderman feel that she has to state that she does “not agree with Jacobson’s politics”? Don’t these people recognize a life line when they see one?

Jacobson is the Other. Schneiderman is of the Left and never expected her own would turn on her. It will take a bit more violence for her to rethink lots of things.

Reject Israel, reject your foundation and culture. This is where they are heading: http://www.thegatewaypundit.com/2014/04/muslim-brotherhood-launches-us-political-network-to-promote-sharia-law/ .