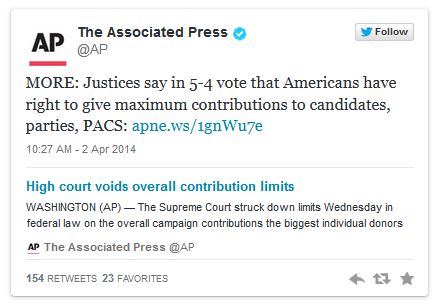 The Supreme Court struck down limits Wednesday in federal law on the overall campaign contributions the biggest individual donors may make to candidates, political parties and political action committees.

The justices said in a 5-4 vote that Americans have a right to give the legal maximum to candidates for Congress and president, as well as to parties and PACs, without worrying that they will violate the law when they bump up against a limit on all contributions, set at $123,200 for 2013 and 2014. That includes a separate $48,600 cap on contributions to candidates.

The decision will allow the wealthiest contributors to pour millions of dollars into candidate and party coffers, although those contributions will be subject to disclosure under federal law. Big donors already can spend unlimited amounts on attacks ads and other outlets that have played an increasingly important role in campaigns.

But the court’s decision does not undermine limits on individual contributions to candidates for president or Congress, now $2,600 an election.

Chief Justice John Roberts announced the decision, which split the court’s liberal and conservative justices. Roberts said the aggregate limits do not act to prevent corruption, the rationale the court has upheld as justifying contribution limits.

Here is the ruling from SCOTUS.

Lachlan Markay is tweeting many quotes from the decision (too many to embed here!).

We will update this post with reactions to the decision.

Left-wing CREDO Action (part of CREDO Mobile) decried the decision and is calling for action:

In today’s case, McCutcheon vs. FEC, the Supreme Court decided that the wealthiest Americans could give the maximum donation to as many federal candidates, political committees and parties as they wanted. The wealthiest donors tend to support candidates who will promote the pro-corporate agenda that made them wealthy in the first place. And if we don’t turn back from this path soon, the U.S. will become a plutocracy governed by the corporations, for the corporations.

[…] The majority on the current Supreme Court look at corporations and see a people entitled to First Amendment rights. They won’t even acknowledge the appearance of corruption, let alone the presence of corruption, when our election system is awash in campaign cash doled out by a small handful of incredibly wealthy donors and corporations.

We know whose side Antonin Scalia and the Citizens United majority of the court are on. So we’re sending them a new set of robes [ed. note: the robes are “complete with corporate logos,” including logos for Koch, Walmart and Monsanto, among others].

Complete the form on this page to add your name to the card we’ll deliver along with the robes.

Twitchy has got a good roundup of tweets, which include a whole lot of angst directed at…the Koch brothers.

Now that Obama and his henchmen (the Krugmanites) have made the rich richer and the poor poorer we’ll have to see who can buy the next elections.

Whooo! Did Roberts do a body check and discover his marbles?

Don ‘t get your hopes up!

Of course there are many more super-rich Democrats who give a lot of money, so it isn’t a partisan victory, but any time a restriction on free speech is lifted, it is worth celebrating.

Another reason Republicans must take the Senate.

I wonder if this means that the curious case of Dinesh D’Souza will get kicked?

Dirty, Filthy Harry has already done his Emmanuel Goldstein rant from the protected precincts of the Senate well.

Dirty Harry has been wrong since day one . Why would he stop now !!

It is said that less than 10 people financed the presidential campaign of JFK.
So now, we can go back to those wonderful years of Camelot.

I’m not well read on campaign finance law and such. But if this ticks off Breyer and MoveOn.org and makes Thomas happy then I’m probably all for it.

“The Roberts Court has weakened America’s democracy and contributed to a system of legalized bribery by allowing big money to swamp the voices of regular Americans and dramatically alter the outcome of elections,” she added in a written statement.”

That’s coming from Anna Galland, executive director of MoveOn.org so I can assume this ruling is exactly the opposite of whatever she says.

Moveon, I wish they would moveon to North Korea.
How many millions have they raised and given to democrats?

On its face this looks like a license for the very wealthy to buy political parties, if not elections. But I suspect that all it will really do is move the buying out into the open. And it’s as much a victory for George Soros as it is for the Evil Koch Brothers.

The “super rich” already do so under the current campaign finance laws via unlimited donations to the political parties and PACs (thanks John McCain), not to mention “in kind” donations in the form of free media airtime from sycophantic liberal journalists, and the unions. The Democrat Party has indisputedly been the winner in this battle as the majority of the top 20 donors are Democrat givers; the first Republican donor on the list doesn’t even appear until #8. And oh…the Koch Bros aren’t even on the list. The list consists of unions, trade associations, and defense contractors.
It seems so logical that money is speech. Allow anyone to give to anyone…as long as all contributions are immediately disclosed in an easily accessible way so we can hold that politician accountable. That’s all.

Accountable for what? Receiving donations?

Or spending the donated money on irrelevancies, like, say, Rielle Hunter?

Fortunately, although how some goof like Edwards spends election money may be a matter for the law, at least it isn’t any sort of menace to the Republic.

OMG all this free speech going on. Can you say UNIONS

-Anything that pisses Harry Reid off, I’m good with (though, I doubt it does, ’cause now he can scream Koch Bros. until the cows come home;cowboy poetry)

-The libs scream “This is destroying our democracy!!”, to which I say “Good, long live the Republic!”

-I forgot the 3rd one (just to Keep Gov. Rick Perry relevant to national conservative politics)

-Time and time again we see clear as day, the we are one vote on the Supreme Court from legally shredding the U.S. Constitution.

“Anything that pisses Harry Reid off, I’m good with” I’m with you on that and only if we could get the Senate Repubs on board.

It’s shameful and distressing how none of the “liberals” on the court are willing to defend core first amendment values.

Liberals have never been in favor of free speech. They are in favor of your right to agree with them – and nothing else.

There are countless examples. Just witness the Left’s unhinged fury against the official in Maryland who said a prayer. Or walk onto a college campus and say there is no evidence to support the theory that man-made global warming is real.

Liberals have never been in favor of free speech

No socialists have any great interest in free speech; it’s just not a part of the socialist concept of how human society functions or how it should function.

What exactly is the leftoid problem with this?

It can’t be the general influence of money on politics. Rich individuals, groups, or corporations can buy entire newspapers, radio stations, or TV networks. They could before, and they can now.

It can’t be a concern that, given enough cash, candidates for office will be able to bribe enough voters to swing elections. And it doesn’t take much – remember Obamaphones? But in aggregation, mucho dinero is involved, because there are a lot of voters. But filty rich types like, say, Bloomberg or Gore or Kerry, can afford to do this already. Like bribery of politicians, bribery of voters is illegal, will remain illegal, and won’t be inhibited to any useful way by the law, particularly when one of the major political parties is so adamantly opposed to even the mildest reforms, such as voter ID.

It can’t be a concern that more cash sloshing about might inflate the cost of getting earmarks inserted in bills. In the current time-honored system, a manufacturer of a piece of hardware which simply isn’t in demand (a patrol boat, an x-ray machine, etc) can make appropriate “campaign contributions” to a flexible congressman who will in turn insert an appropriate earmark into an appropriate bill, and – voila – the manufacturer has instant customers. It’s not clear that this SCOTUS decision will have any effect on this pernicious form of bribery.

So . . . what am I overlooking? Where is the great menace to the Republic? This money won’t let anyone “buy” office; he still has to be elected. Before the 17th Amendment, one could conceivably become a US senator without facing the inconvenience of rigging an election, as appropriate campaign contributions to state legislators might secure an appointment to Washington. And even after the 17th Amendment, in many states similar contributions to governors might swing an appointment to a vacent senate seat. But again, this SCOTUS decision will have no effect on any of that.

If the leftoid hysteria isn’t about what liberals say it is, then it must about something they don’t want to mention. The obvious culprit is money from George Soros. The attempts to plant anti-Koch hysteria are a blatant smokescreen to give Dems a handy change-of-subject dodge whenever Soros is mentioned, although Soros’s financial influence dwarfs that of the Koches. And one doesn’t have to be a Bolshevik to think that Soros has far too much money for anyone’s good. But even this doesn’t explain the Progressive reaction. Soros will easily be able to outspend the Koches, legally or clandestinely, and this decision doesn’t affect that.

So, specifically, why the hysteria? (By “specifically” I mean, not generalities – even if true – like “liberals are a******s”.)

Stand by for those receiving Soros funding to commence the ritual decrying of the Koch Brothers financial donations to conservative campaigns and organizations.