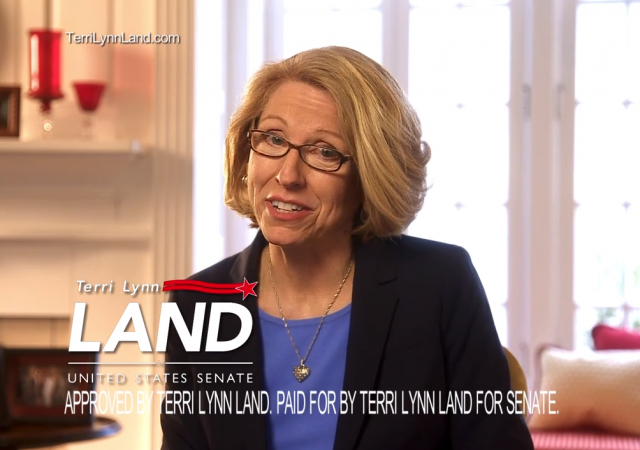 Terri Lynn Land is running for the United States Senate in Michigan, a seat occupied for nearly 40 years by retiring Democrat, Carl Levin.

Land’s opponent is Democrat Congressman Gary Peters, who has apparently defaulted to the Democratic party’s standard playbook, by accusing his female Republican opponent of waging a “war on women.”

It is a strategy Democrats have employed for several election cycles and, despite the absurdity of the claim, it has enjoyed its share of success. That said, Terri Lynn Land may have found the antidote to the tired anthem in her latest ad, entitled “Really?”

The ad has gained a good deal of traction in the national media since it was released.

So what kind of ads are Land’s competition putting out? The same old worn out rhetoric.

Good luck with the “war on women” campaign strategy, Congressman Peters. It doesn’t look like Terri Lynn Land is going to stand for it.

The Repubs can take their memes, and stand them on their heads. This will work.

I’m surprised that this is seen as a good ad, I was hoping for something better. Just saying “I’m a woman” doesn’t seem like enough. The attack is not on her, but an attack on Republicans who she represents. If she said “I’m proud to work with other Republicans on issues vital to women and families” or “As a proud Republican who has worked tirelessly with other Republican women to make sure that our country’s women have access to the best opportunities in the world” it would ring better (to my ears at least). The sipping coffee while not actually swallowing any liquid just seems a little fake and she loses the opportunity to state her case. Just my 2c, I am not a political type person, perhaps this ad will go over fabulously.

Have to agree for the most part. This ad resonates with the faithful, but does nothing to convert the lost.

“Just my 2c, I am not a political type person, perhaps this ad will go over fabulously.”

Spot on. The ad was created by a political type person instead of a grassroots communicator. That’s why it looks more like a Colbert outtake than a meaningful response.

Her message is if sipping without drinking is phony, so is the “war on women”.

The unspoken key here is that this has been an absolutely safe Democratic seat since Watergate. Levin was never seriously challenged after unseating Robert P. Griffin, except in his first reelection campaign, which happened during Reagan’s 1984 landslide.

If Republicans can take this seat, it’s going to be a loooong Election Night for Democrats.

I have to agree that this could have been a bit more effective if she had a good cap-line at the end.

But it is very powerful.

(Funny how CNN has on a WaPo woman and a Politico woman to comment on this ad……..your leftie Dem bias is showing, CNN – surprise, surprise!!!)

The Koch-Brothers-Republicans-Are-EEEEEvvvviiillll-women-hating-mysoginistic-anti-family-h8ers commercial is all they’ve got. And painting a woman is anti-family?! – good luck with that one!

They bought all that [email protected] about Sarah Palin.

I thought the most effective thing was her shaking her head no as she put down her cup.

This reduces the argument to women vs women. I refuse to acknowledge that some women-oriented issues, for example: abortion/murder, is the exclusive province of women.

That said, Sarah Palin, or a similar rational mind, for president.

As Peters continues his “war on women” nonsense, I think an effective closing line to one of her counter ads would be, “So who’s the woman in this race?”

yes, that would be an excellent line!!

But is she an authentic woman?…