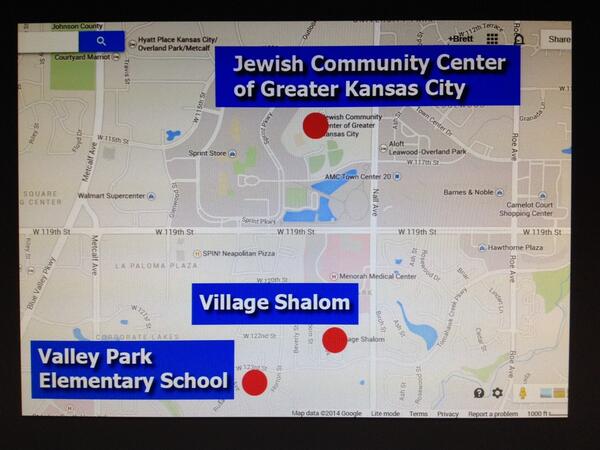 When these types of shootings take place, initial news reports often are inaccurate, so caution is urged.

Kansas City News41 identifies the following person as having been taken into custody, and says at least 3 people dead:

Overland Park Police confirm multiple shots were fired at the center, which is located at 5801 W 115th St. and Village Shalom, a retirement home located at 5500 W. 123rd. Both areas are currently on lockdown.

Police took one man into custody at the Valley Park Elementary at 123rd and Nall. The man was heard yelling “heil Hitler” as he was taken into custody.

A 41 Action News photographer on the scene spoke with a man who says another man pointed a gun at him and shot the windows out of his car. That person was not injured. 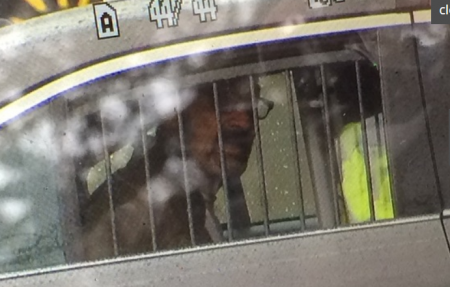 Overland Park presser has wrapped; bottom line, cops aren't confirming any of the hate-crime details yet.

Police not releasing shooter's name but say he's not from kc area, didn't know victims, in his 70s and armed with rifle. #jccshooting

In this video, he pretty clearly says Heil Hitler, so not really sure why police confused as to motive:

The alleged shooter is 70 years old. In the brief perp walk to the patrol unit under arrest he looked confused and disheveled. Before we speak of ‘hate’ crimes, they need to rule out psych issues, whether primary or as the secondary result of some medical condition. Resist media sensationalism.

Reports this morning are that the shooter is a well-known white supremacist nutcase with a criminal history. Ron Radosh as PJ Media has quotes from the shooter’s online site. A fringe crazy. What made him go out and shoot people just now is not yet clear. To make things worse, the crazies from Westboro Baptist say they’ll picket the funerals.

That was horrible. My most sincere condolences to the families of those who were killed.

As for this pig… I’m coming to believe that anyone who kills people in the name of Hitler or Nazism should be tried, convicted… and hanged, high. Those Nazis who were convicted at the Nuremberg trials for crimes against humanity were hanged.

Seriously. What kind of people believe in such a degradation, such a perversion of humanity? Beasts are better behaved than Nazis.