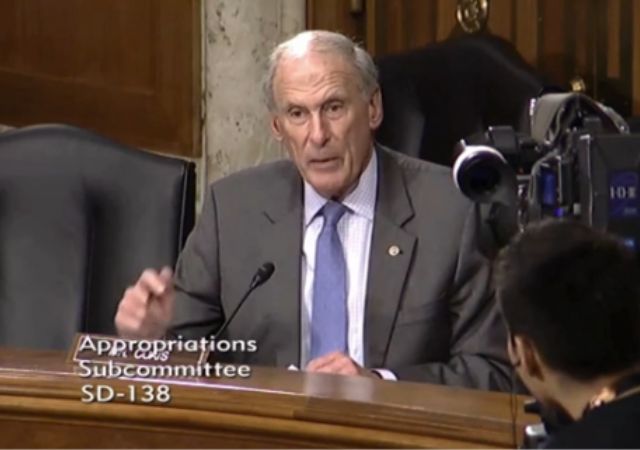 Senator Dan Coats of Indiana apparently had a bit of a mix-up yesterday.

All hearing rooms look alike. At least they do for Sen. Dan Coats.

The Indiana Republican, in an awkward mix-up, showed up at the wrong hearing on Thursday when he arrived at an appropriations subcommittee meeting.

At first, it seemed like nothing was wrong. He took his seat, flipped through papers and then complimented the witness in the room for his department’s quick response to a letter he had sent earlier about a military accounting office in his home state.

Then Coats launched into a fairly lengthy question.

The problem was, Coats was talking to David Cohen, the Treasury Department’s undersecretary for terrorism and financial intelligence — wrong guy. Coats assumed he was addressing Principal Deputy Undersecretary of Defense Mike McCord, at an entirely different hearing.

An aide then slipped Coats a piece of paper. The senator stopped talking and said, “I just got a note saying I’m at the wrong hearing.”

After some awkward moments, Coats eventually excused himself, noting that this had been the first time this had ever happened to him and said, “I’ll go try to find out where I’m supposed to be.”

The Washington Post, which first reported the story Thursday, elaborated Friday on how this actually happened.

But though Coats began speaking about a state-based military personnel office more than an hour into the hearing on financial intelligence and terrorism, he had not sat through the entire thing. Because, as astute Hill watchers know, lawmakers rarely attend a hearing much longer than it takes to ask a question.

Coats’s communications director Matt Lahr blasted an e-mail to his press list to clarify that his boss had not been sitting idly in the hearing, daydreaming. The actual hearing he was supposed to be in, with a start time an hour later, was also underway, and Coats slipped into the wrong back door.

“After entering the room and reviewing his notes for 3-5 minutes, he was called on and the unfortunate moment occurred,” Lahr said.

But Coats’s office is keeping a sense of humor about the incident. The subject line of the e-mail was: “A funny thing happened on the way to the hearing.”

Coats also took the incident in stride, later that day sending out a tweet jokingly blaming Russia for messing with his schedule. (Coats was one of those recently sanctioned by Russia on a list with other lawmakers and U.S. officials, in response to the U.S. imposing sanctions against Russia). 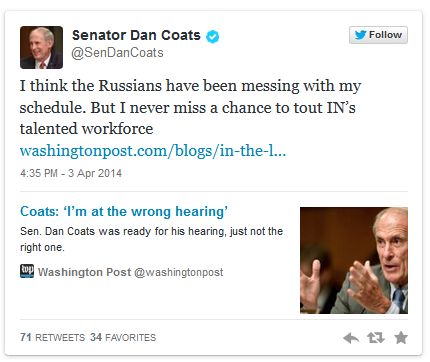 Watch the exchange below, via RollCall.

It beats Guam tipping over.

Alzheimers is a horrible disease.

Maybe, I dunno. Not really sure.

One thing I am sure, though: Time to retire.

What a moron. Regardless of party, this is a head smack.

Not that big of a deal. The seat has his namecard set in front of him… and unless he travels with that thing in his pocket, that WAS his seat. How many times have YOU been scheduled to be at two places at once?

A perfect example of why senators and representatives should be more limited to the number of committees that they can sit on. Isn’t the maximum now about twenty or so?

Tough crowd! One mistake – and one where he was likely put into the wrong door by aides – and people are all over the guy.

Dan Coats has a lifetime ACU rating just over 89. There are few who have amassed as strong a conservative record in the Senate as he.

As far as “term limits” go, Coats is the wrong target. Appointed to Dan Quayle’s seat when Quayle was elected VP, he won the remainder and a full term of his own, then retired in 1998. He announced he would run again opposing Evan Bayh in 2010, whereupon Bayh retired.

I say, let’s allow the voters of Indiana to choose their own Senators. They get a chance to limit terms at every election.

The left will make plenty enough jokes about it. No need to join THAT fray, keeping in mind that nary a word is ever said about obastard’s and Biden’s mishaps, misspeaks, malapropos and insults.