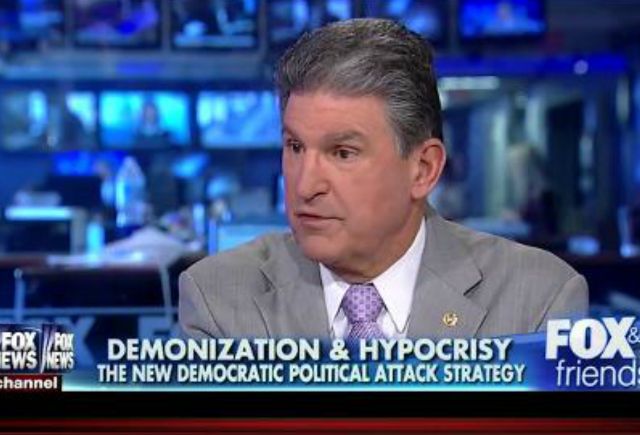 Democratic Senator Joe Manchin of West Virginia apparently isn’t hopping on the Koch Obsession bandwagon with some of his colleagues.

When asked in a FOX News interview whether he thinks it helps or hurts the cause for the country and for Congress when Harry Reid continually brings up the Koch brothers, Manchin was critical of the recent rhetoric and didn’t seem to think it did anything to help in moving the country forward.

If you’re trying to rally the base, the bases have already been rallied, the right and the left base has been rallied. It’s us in the middle that have to start making something happen here in Washington to move this country forward. People want jobs.

You don’t beat up people. I mean, I don’t agree with their [the Kochs’] politics or philosophically, but, you know, they’re Americans, they’re doing…paying their taxes, they’re not breaking the law. They’re providing jobs. Right, wrong or indifferent, whether you like their politics or not, there’s people who don’t like the extreme Democrat politics or extreme Republican politics. We’ve got to start being Americans again.

[…] I’m in an environment right now, every day we’re expected to go out and raise money to be spent against our colleagues and go out and campaign against them, and then on Monday come back and say, ‘Hey buddy, will you work with me, will you go ahead and sign this bill’… that doesn’t work back in West Virginia, we weren’t raised that way. So this type of rhetoric does not help us move this country or move the agenda forward.

Watch the full exchange below.

A spokesman for Koch Industries responded, via Politico:

A spokesman for Koch Industries said “it’s about time” somebody spoke out against Senate Majority Leader Harry Reid’s attacks on the Koch brothers, saying such jabs are expected on the trail, but the Senate floor should not be the venue.

“I get politics and I think the American public expects that in election years, when you’re out on campaign trail, politics will be invoked,” Steve Lombardo said in an interview, regarding the Democratic senator’s recent hits against the Koch brothers.

“But to be doing it on the floor of the United States Senate repeatedly? It’s about time somebody questioned that,” he said.

More of Lombardo’s response at Politico.

For some reason Sen. Reid always reminds me of the corrupt Senator from Nevada depicted in the “Godfather II.” I wonder why that is?

Sen. Manchin will be anti-Reid, anti-Obamacare, and pro Keystone XL until the polls close Election Day.

He cares more about the D than the WV, and is therefore going down like the Atari Lynx.

Correct. Manchin will run to the Right of Center when running for re-election and then spend 5 1/2 years being a loyal Liberal.

I’ve been wondering if he will switch parties should the Republicans regain the Senate. (Especially if its a something like a 53-47 or 54-46 majority.)

I’m not saying that I would like having a Manchin/Crist types in the coalition but it’s better than having them caucus on the other side. (or is it?)

But he’s not up for senate re-election until ’18.

Manchin’s days may be numbered. WV has been trending red in recent years. Obastard failed to carry WV in ’08 or ’12. Manchin was a popular governor and rode that train to the U.S. Senate. But most of the issues really meaningful to people are now, sadly, federal issues, which targets Manchin as part of the problem, not part of the solution.

What Manchin is saying here is true, but his reason for saying it is transparent.

His wisest move would be to switch parties. Do the ‘pubs want him? I hope not. WV has been hard hit by obastard’s policies, and they may well be poised to elect a true conservative who will help try to put ‘business’ back in business when Manchin comes up for re-election.

Or is he vying for a WH run in ’16 as an alternative to Hitlery? But if he switched parties if the senate does (or even doesn’t) go ‘pub this year, he’d be running as a ‘pub and wouldn’t have to run against Hitlery in the primaries. Maybe the ‘pub prospects in the forefront thus far look like an easy kill to him and his advisors. I would have to agree.

southcentralpa I accidentally hit the thumbs down on your comment when I meant to hit the reply button. Sorry.

Why doesn’t he say this on the Floor of the Senate, like Reid is doing?

Yes. Voice a formal objection, not preen for the media.