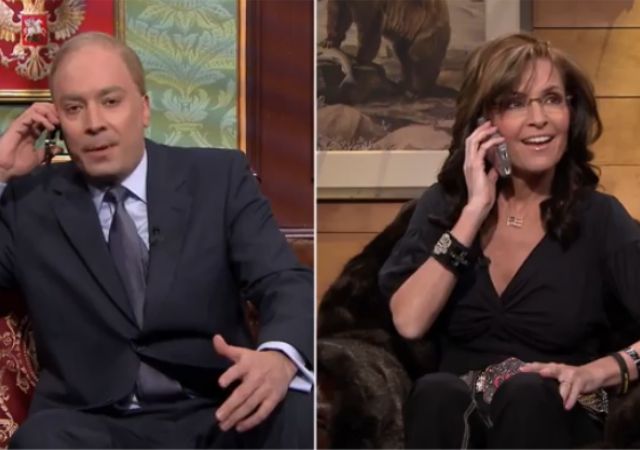 Last night, Jimmy Fallon on his “Tonight Show” featured a sketch that poked some fun both at Russian President Vladimir Putin and at President Obama (and a few others), in a mock phone call between Putin (played by Fallon) and Sarah Palin.

Fallon introduced the sketch by recalling Palin’s prediction that Russia would invade Ukraine.

Well you guys, if you’ve been following the news, you know that a few days ago, Russian President Vladimir Putin called President Obama to discuss the situation in Ukraine. And not many people know this but right after he talked to Obama, Putin made another phone call, this time to someone who actually predicted his invasion of Ukraine back in 2008.”

And this is amazing, we actually got footage of that conversation. Here at the Tonight Show, we have footage of the phone call that he made after he talked to President Obama. It’s actually amazing, take a look at this.

I won’t spoil the rest.  Palin was a good sport, even poking a little fun at herself. Watch the video, and be sure to watch until the end.

Leno got very tough on Obama at the end. Some speculated it was a subtle dig at NBC and GE bigwigs who would be upset.

Is she actually playing the flute?

Yep. She is actually a rather accomplished flutist.

Did you know that Condi Rice is a concert pianist?

Did you know that Condi Rice is a concert pianist?

And a speed skater.

Here’s a clue: when you start to blow, the sound should start simultaneously. If there’s a delay, you’re lip-synching.

Oh God, Sarah’s a flautist? And me the Founder of the Committee to Beat James Galway Severely About the Head and Shoulders With Jean-Pierre Rampal.

Sarah played the flute as the talent part of the Miss Alaska ( or similar) quest way back .

She. was not exceptional but then it was expected back then that people did not have to be xceptional .Nowadays contestants would have been starved , pc trained &with a sex vid in thewings.

A local station had this on the entertainment segment of the late morning news today; the reporter referenced Palin’s (alleged) “I can see Russia from my house” statement.

I was surprised when one of the anchors corrected her and pointed out that Sarah Palin didn’t make that statement. The other people on at the time also thought it was an accurate Palin quote.

Who knows, maybe journalists are capable of learning something on occasion.

Regarding the new MSM willingness to publicly declare the truth about the Russia line – it’s a smart producer who doesn’t want to have a flash tea party out front of the news studio for days on end. A flash mob that the station would be forced to cover because you can bet your last dollar competing stations would be there.

Very smart to use a prophylactic approach by “correcting” one another on the air.

[…] I’m posting the video below, via Legal Insurrection. […]

Fun fact #1: Shortly after Palin’s appearance on national political scene here, Vladimir Putin laid a claim to killing a tiger. See here: http://www.huffingtonpost.com/2012/03/16/vladimir-putin-tiger-encounter_n_1352911.html Hinting skills envy?
Fun fact #2: Russians would like to have Alaska back: http://edgeofthesandbox.wordpress.com/2014/03/17/the-bear-roars/
Fun fact #3: Putin is not a drinker.
But, yeah, Sarah Palin is just the right kind of person to send to Russia to talk to Putin. Russians would lover and hate and love to hate her, and find her convincing, and she would never forget that she’s first and foremost an American.

Putin calls her The Huntress. She’s got the requisite mile wide mean streak that a good politician must have, and, given, the hard note in the voice eye Ukraine, even in play, she would delight in taking Putin down a peg or two.

If you think Maggie Thatcher was tough, wait until Sarah Palin sits in the WH. Smart. Rough. Tough. And not ashamed to rumble.

Good for Fallon, I suspect this is part of his effort to graduate to the big time. Perhaps he has decided to take the good advice to follow Johnny Carson, who made fun of everybody.

Carson was meticulous about it. He kept track of all his political jokes to ensure they balanced out at the end of the week. If a breaking news story or scandal forced him to rib one side more than the other, he would almost always even the score within the next week.

If Fallon follows suit, he might have a chance. If he can’t bring himself to lampoon Democrats, he may fall victim to ratings decline. The most prominently mentioned possible successors to Letterman, Conan O’Brien and Craig Ferguson, are both willing to be rough on everybody.

How? Why? Media making fun of Obama? This is possible? I am literally in shock. I’m not just saying that. I feel weird.

He also absolutely tore a hole through the administration’s celebration of their obamacare numbers.

Loved the role play! … love the stress from the lefties and their whining also – you should read the lib comments on The Tonight Show FB page … ” why give her more exposure? … waaah! …waaaah!….”

The Palin false memes are melting away folks ….. YEAH

btw – remember this occasion in Dec 2009, when Conan O’Brien hosted The Tonight Show? Sarah Palin appeared with William Shatner, and gave him the Nightstick … LOL **__**