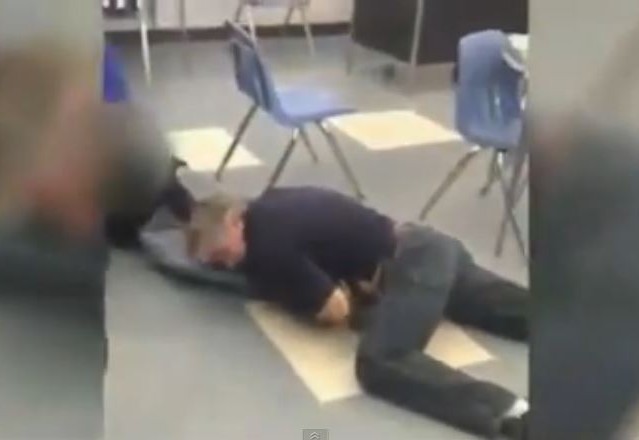 Coach Black pinned the student to the ground while help arrived.

The incident was caught on cell phone video:

The We Support Coach Black of Samohi Facebook Page has over 10,500 “Likes” so far — come on, we can do better than that — go “Like” the page and spread the link. 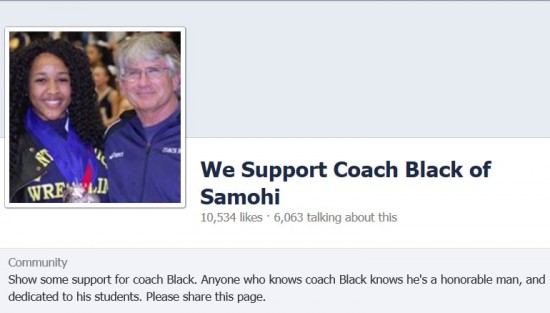 A change.org petition for Coach Black’s reinstatement has over 4000 signatures.

The school official who criticized Coach Black has apologized, via L.A. Times:

Santa Monica’s school superintendent has apologized for comments she made after placing a popular science teacher on leave for getting into a physical altercation with a student.

In a statement sent to the “community” over the weekend, Santa Monica-Malibu Unified School District Superintendent Sandra Lyon acknowledged that her remarks about the teacher and wrestling coach have “caused great anger.”

“There is concern that my statement reflected a pre-judgment of the teacher’s conduct prior to completion of an investigation,” she said. “There is also concern about my failure to address the conduct of one or more students who were involved in the incident. In retrospect, I understand how my statement has created these concerns. I apologize …”

Hat Tip to commenter LukeHandCool, who grew up on the means streets of Santa Monica, and provided this commentary:

Meanwhile, at my alma mater, Santa Monica High School, last week a student was openly selling drugs in class when the science teacher confronted him and asked him to turn over what he had. The student refused and attacked the teacher.

The teacher, Mark Black, is also known as Coach Black and coaches the wrestling team. He subdued the student without throwing a punch and told kids to summon security.

So what happened? A superintendent suspended Mr. Black and reached out to the delinquent’s family. A world upside down.

I love how the news pixelated out the little punk’s face, but you could see his *black* hands in part of the video. Why does the press chose to ignore the violent nature of many young black men?

Moby is as moby does.

(He’s a minor, they’d pixellate the face of any student.)

It seems you answered a different question than what the poster asked. The question was broader than just this case.

He’s been arrested and he’s not a minor. The “child” is actually 18 years old.

Well, at least the kid learned a good life lesson:

Looks like Coach went out of his way to just pin him and hold him down, instead of bashing his head into the floor and grinding down a joint or two like I would have done to the punk.

Maybe superintendent Sandra Lyon should be put on leave from her position until an investigation is completed over HER handling of this situation.

>>“There is concern that my statement reflected a pre-judgment of the teacher’s conduct prior to completion of an investigation,” she said.

Then why’d you make the statement, you moron. You’re supposed to be a leader.

What she meant to say was “The Coach acted stupidly”

The Statists are attempting, both brazenly and in many subtle ways, to divest the population of all notions of autonomy or self-empowerment. The idea of taking action into one’s own hands and proactive problem-solving is inimical to the Statist ideal of a helpless mass of people always looking to authority for the answers, salvation, resolution. Idiocracy is their objective, and a morally inverted one in which those who do act boldly and bravely are seen as unstable freaks.

Hey, it’s welcome to West Oceania! War is peace! All hail the peacebringers!

The most significant support for the coach came, in my opinion, from the students in the school. It was reported in the local (San Diego) paper as huge.

Kid ought to be glad it was the wrestling coach and not a boxing coach.

This is why I don’t teach in public schools. The administration at too many public schools has your back – so they can shove knives into it.

Both the superintendent and the school principal should be fired.
Think about it, people.
Teachers like Coach Black take care and protect our children.
What do they get in return?
The school administration treats him (them) like criminals. But they “reach out” to the families of the punks who try to corrupt and hurt our kids.

What side are they on?

Coach should have done a double underhook snap DDT… someone wouldn’t be dealing dope in school for a long time.

Why might it be appropriate to assert, as if it were an undisputed fact, that the kid was selling drugs?

The latest from the LA Times:

“Daniel Jacobs, 32, a 1999 Santa Monica High School graduate who runs a Silicon Valley startup called Placebo Effect, was so upset by Lyon’s first statement that he started a change.org petition demanding she apologize. (Another former student, Timothy Conley, started a similar petition asking for the reinstatement of Black, who is on paid administrative leave. His petition has garnered more than 4,000 signatures.)

“I’ve never met a better or more kindhearted man in my life,” said Jacobs, who makes a point of visiting Black every time he returns to Santa Monica. He said the 60-year-old coach, who is still competing as a veteran wrestler, executed a simple series of wrestling moves aimed at immobilizing the student.”

“The 18-year-old, Blair Moore, was arrested on suspicion of threatening a school official, battery against a school employee, possession of a weapon on a school campus (a box cutter) and possession of marijuana on school grounds.”

I have an opinion that is not exactly politically correct, but since I don’t worship the god of political correctness, here it goes:

Two points:
1 –
Why do these “kids” deal and use drugs so openly and freely in school?
Maybe because everybody looks the other way?
School personnel probably prefers to “see no evil” to avoid being involved in a situation where they will be punished or harmed for doing the right thing.
The superintendent’s reaction is proof of what you’ll get if you dare to confront the punks.

Lyons’ attempt to bestow victimhood on this thug is transparent. She sweeps the fact that he assaulted a teacher and was arrested on a myriad of charges under the carpet. If the student was white, it’d be a whole different story, or non-story. If the pencil twirler had been black, nothing would have ever been said except perhaps by the teacher: “Dontavius, put that pencil down now.”

Heh. I guess Lyons thinks the coach “disrupected” the student by not standing still to be a punching bag.

This is the Santa Monica High that is the alma mater of many stars (from Glenn Ford and Gloria Stuart to Sean Penn, Robert Downey Jr., and Charlie Sheen), as well as political figures (John Ehrlichman, who was removed from SaMoHi’s Hall of Fame after Watergate while Luke was attending) and polymaths (LukeHandCool).

Samohi is the school used in the classic “Rebel Without a Cause.”

Now it’s increasingly the school of “Rebels Without Pause When They Feel They’ve Been Shown Disrespect.”

More and more it is not the Samohi I knew. Sometime just before our oldest daughter was to enter, my nephew advised against her going there.

Then one day a huge fight between black and Hispanic students erupted and the school was on lock down. Santa Monica Police arrived and asked for reinforcements from Beverly Hills PD and Culver City PD.

Soon after that incident, I was at my dentist, a nice, albeit liberal woman. Her daughter was attending Samohi at the time.

When I mentioned I was having second thoughts about our daughter attending because of the recent race riot, she poo-pooed my concerns and added that kids know which areas of the campus to avoid. This flabbergasted me. So now there were “no go zones” depending on your skin color, and that seemed natural to her.

As Samohi administration has moved further and further left, it has experience more and more problems.

Steve Miller was a student who was a guest numerous times on Larry Elder’s radio show detailing his fight against teachers and administrators over many lefty goings on, including administration’s efforts to block his invitations to Larry Elder and David Horowitz to speak on campus.

“How I Changed My Left-Wing High School”

LukeHandCool (whose worse deed at Samohi was to forgive a classmate the money he owed Luke from playing poker when the classmate, at the beginning of the sexual reproduction lecture in biology class, at Luke’s urging, stood atop his desk and started singing Paul Anka’s “Having My Baby.”)