Her account of life in Bethlehem also contradicts a controversial 60 Minutes segment blaming Israel for plight of Christians in Palestinian areas. 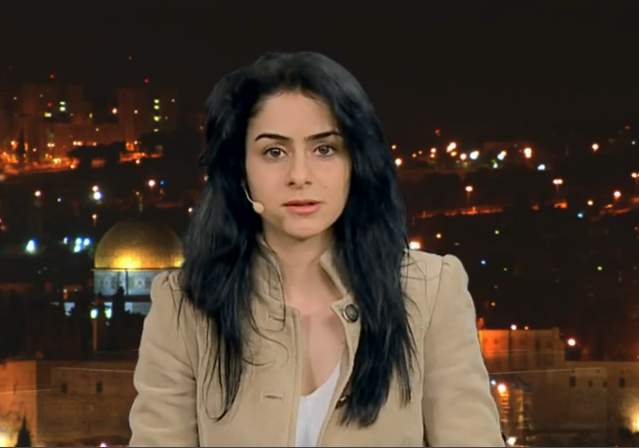 The video below is causing quite a stir, as reported by The Times of Israel:

The video, titled “Christy a Palestinian Christian’s plea to Dr. Saeb Erekat,” was posted to YouTube on Saturday, featuring clips from separate events. In the first, Christy Anastas directs questions at Erekat, a senior Palestinian negotiator, and the second, longer segment, shows Anastas giving a presentation in which she talks about life as a Christian in Bethlehem.

“I believe God has given this land to the Jews as an everlasting covenant,” Anastas said.

Anastas said that Palestinian children are encouraged to violently confront Israel Defense Forces soldiers in order to die as martyrs, and that incentives included payoffs by former Iraqi dictator Saddam Hussein and the Palestinian Authority, given to the families of Palestinians that were killed.

“How many Muslim countries do we have in the world?” she said. “Why can’t the Jews have one country?”

After that last quoted statement about Jews having one country, she details how a family member threatened to put a bullet in her head (at 22:35). She also has been threatened in England. (at 25:25)

Pay special attention to the video starting at 3:25 when she details how children were used as fighters during the Second Intifada, and how the wall built by the Israelis separating Bethlehem from Israel has stopped “my people from killing themselves, blowing themselves up.” (at 13:45)

Not surprisingly, her family is abandoning her, as further reported by The Times of Israel:

A Christian family from Bethlehem distanced itself from a video made by their daughter in which she offers a pro-Israel point of view and blames the Palestinians for the drop in the Christian population.

The Anastas family suggested that their daughter, Christy, had made the video at the demand of unnamed sponsors who offered to pay for her university tuition in Britain, Ma’an news agency reported on Sunday.

In statements made to the local Radio Mawwal station. the Anastas family rejected the notion that their daughter had fled to safety abroad and expressed their surprise at the video, the report said.

The Anastas family suggested that their daughter, Christy, had made the video at the demand of unnamed sponsors who offered to pay for her university tuition in Britain, Ma’an news agency reported on Sunday.

In statements made to the local Radio Mawwal station. the Anastas family rejected the notion that their daughter had fled to safety abroad and expressed their surprise at the video, the report said.

There’s an even more interesting angle to this video. Christy and her family were featured in a controversial 60 Minutes show blaming Israel for the plight of Christians in areas controlled by the Palestinian Authority.

CAMERA has a detailed account of her video contradicts key parts of the 60 Minutes story:

In sum, Christy’s story affirms what CAMERA published in 2012:

Palestinian Christians, like other religious and ethnic minorities in the Middle East, are the target of mistreatment, harassment and in some instances, violent oppression at the hands of their Muslim neighbors.

Nevertheless, much of the media coverage about Palestinian Christians downplays Muslim hostility toward this community and falsely portrays Israel as the sole cause of its suffering.

The reality is Palestinian Christians cannot speak freely about the Muslim dominated environment in which they live. Their leaders often publicly condemn Israel while remaining silent about groups like Hamas, Hezbollah, and Palestinian Islamic Jihad. Occasionally, they might admit that Muslim hostility is a problem, but not very often and not very loudly.

It is time for “60 Minutes” to face the truth. It bungled its story on Christians in Palestinian society and needs to revisit the issue, honestly and accurately this time.

since I had read the video had been taken down before I put hard copy on my server and linked story to here.

Arab Christians are dhimmi holding vainly to some pipe dream of pan-Arabism. Recent news reports out of Israel have been heartening though, and this one adds to it. Arab Christians are beginning to wake up and realize that their destiny and future lie with Israel with whom they have a common spiritual foundation, and not with the Muslims.

Just in case her video testimony is pulled down from YouTube again here is a mirror of it on a different video hosting site
https://vidd.me/v/gcj

May the Lord bless and protect Christy and her family

link I posted is also on my own dedicated in case its pulled again.
will add your link as a secondary source.