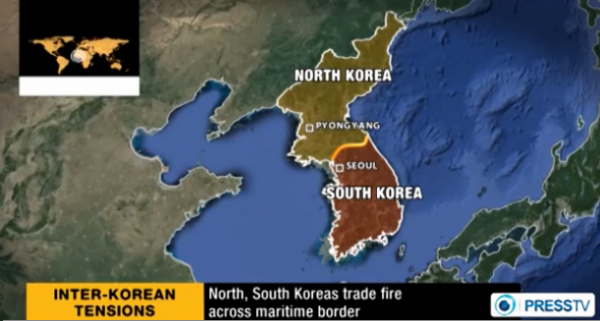 To add to the chaos and unrest around the world, there is recently some disturbing news about the always tense relationship between North and South Korea.

North and South Korea have exchanged fire into the sea across the disputed western sea border, South Korea says.

North Korea announced early on Monday that it would hold live-fire drills in seven parts of the border area.

The area has been a flashpoint between the two Koreas. The UN drew the western border after the Korean War, but North Korea has never recognised it.

PressTV (which has a video report that can be viewed HERE) offers further details on the situation.

“Some of the shells fired by North Korea dropped in our area and our side responded with fire,” a spokesman for the South Korean Joint Chiefs of Staff (JCS) said, adding that both sides had fired into the sea.

The South Korean residents of Baengnyeong Island have been moved to shelters.

“We are urging all residents to evacuate to shelters right now, and some have already done so,” an official of the island said.

The exchange of fire comes shortly after North Korea announced it would be carrying out a live-fire drill near the Yellow Sea border with South.

Following the announcement by Pyongyang, Seoul warned that it would respond if any shells landed on its side of the border.

North Korea had earlier said that it was considering carrying out a new form of nuclear testing aimed at strengthening its “nuclear deterrence.”

The exchange occurred after North Korea conducted its first medium-range missile test since 2009; the usual suspects are saying the usual things in regards to this situation.

The UN Security Council has condemned North Korea’s launch of two ballistic missiles and said it was considering an “appropriate response”.

The UN Security Council has condemned North Korea’s launch of two ballistic missiles and said it was considering an “appropriate response”.

I bet that’s got youg Kim shaking in his boots. What will it be? A “sternly worded Note” or a contingent of child-molesters Peace Keepers?

Kim Jung Un has evidently heard that the US has a spineless, ball-less poofter boy President and has become a true Paper Tiger, so all the world’s bad guys basically have a Free Swim.

Looks like Obama’s “Peace and Love” diplomacy is working.
North and South Korea have just engaged in a friendly fishing
competition, with artillery.