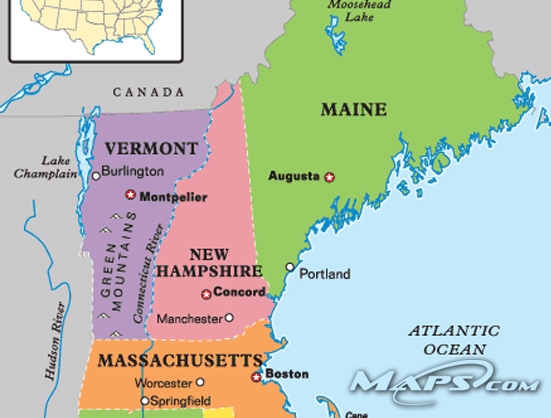 You may be under the impression that Vermont and New Hampshire are similar, and it’s true. But in certain ways they couldn’t be more different. Yes, they’re both small, long, and thin, cold, and mountainous (Green vs. White). But Vermont is the most leftist state in the union, while New Hampshire is slightly libertarian.

Vermont is also a little bit larger than New Hampshire. Vermont has an area of 9,620 square miles, with only 626,630 people, whereas New Hampshire, with nearly double the population at 1,323,459, possesses only 9,304 square miles, a bit over 300 square miles less. So now, in a surprise move, New Hampshire’s Attorney General Marc Lebensraum has announced that this geographic area differential is unfair, and has revived a long-running border dispute between the two that was thought to have been settled back in the 1930s when SCOTUS ruled on the issue:

The border between New Hampshire and Vermont was set by King George II in 1764 as the western bank of the Connecticut River. The U.S. Supreme Court re-affirmed this boundary in 1934 as the ordinary low-water mark on the Vermont shore, and markers were set.

Ever since, the two states have been required by their respective state laws to formally reaffirm the boundary every seven years. Here’s a photo of the last time it happened, which was in May of 2012, and was obviously quite amicable: Since that photo was taken, however, New Hampshire has had a turnover at the AG’s office, and new AG Lebensraum wants to re-open the old wound because he believes that New Hampshire’s larger population requires more territory, and he feels that the obvious remedy would be to take some width from its neighbor, width that, according to the AG, “Vermont neither needs nor deserves.” Mr. Lebensraum elaborated on the reasons for the re-opening of the dispute:

After all, why should a king have been the one to set our boundary? Surely the people of Vermont would agree with me on that; they can’t possibly be monarchists. And what’s this “low-water mark” business? With global warming, these markers are about to change anyway. Clearly, the Connecticut River belongs wholly to New Hampshire rather than Vermont (and certainly not to Connecticut, despite its name). In fact, I’m going to proclaim that, at least in its New Hampshire course, the river will henceforth be known as the New Hampshire River.

Lebensraum added that Maine had better watch out, because the geographic inequity between Maine and New Hampshire is even worse than that between Vermont and New Hampshire. Maine is a rather large state with over 35,000 square miles, which makes it ten times the size of New Hampshire, and yet it has an almost identical number of people: 1,328,302 in Maine to New Hampshire’s 1,323,459.

Lebensraum says he finds this very suspicious, although he’s not sure there’s anything to be done about it except to call Maine a population copycat. Next on his agenda is a re-opening of this boundary dispute between the two states, which according to Lebensraum has some similarities to New Hampshire’s argument with Vermont:

The issue over the Maine/NH border (also a river) was only settled by SCOTUS on a technicality in 2002. Maine’s a big, greedy state, and it’s time that ended. And again, just as with Vermont, why should on earth should King George II get to set our boundaries?

Neither the Vermont nor the Maine AGs could be reached for comment.

[Neo-neocon is a writer with degrees in law and family therapy, who lives in New England and blogs at neo-neocon.]

I say give NH several more feet at the border !

Very nice! It was the “Lebensraum” which tipped me off.

Shouldn’t the regional government simply move enough people every ten years, by cattle car, to other of the three named states so that the density is the same in each state?

I agree, just as long as they’re left aboard the ‘cattle cars’.

Another solution, having lived in Vermont, Maine and Conneticut, this is my suggestion for solving the problem.

Run 100,000 through a wood chipper at 10,000 feet, then spew their DNA equally over both states – a guarenteed way that they can “share” the land as well as removing a designated vermon category of personhood from the public forums of America: messy but workable, and great fertilizer.

What this does for me is highlight the tyranny of the NE states.

Heck, we have suburbs that have populations greater than 10 or 12 of these popcorn states.And

We don’t get 2 US Senators.

Taxation without representation is what it is!

Does Vermont have a rump?

I think the solution is obvious. Vermont needs to settle this with the AG of NH with the help of Cherry Garcia. He may be pint size, but he punches above his weight according to the POTUS.

Yea, the name Lebensraum tipped me off also. Almost had me though. 🙂

Even after April 1st, a vote for Maine’s ‘non-Portland area’ counties to join New Hampshire would probably carry those counties.

Wait…this was an April Fools’ joke?
And we were busy raising an Abraham Lincoln Brigade to come fight against those nasty Vermonteers….

No, No, No. You need to call them the White Mountain Boys! The Abraham Lincoln Brigade is so, well, Illinoid.

Michigan had better keep its hands off of Toledo. But on the other hand……..

Asked for comment on the border dispute, Democratic Congressman Hank Johnson, a noted topography expert who famously warned during an official Congressional hearing about the dangers of Guam capsizing if the U.S. relocated too many troops there from Japan said, “I oppose changing the boundary. There’s a very real risk that Vermont’s natural equilibrium may be thrown off by the change. The last thing we need is for Vermont to collapse into a giant sink hole”.

Some of the New Hampshire Libertarians should just move to Vermont and help change the politics.