National Popular Vote Compact – The mother of all unintended consequences

National Popular Vote Compact – The mother of all unintended consequences

It’s a national scheme whose time has not yet come, and likely never should 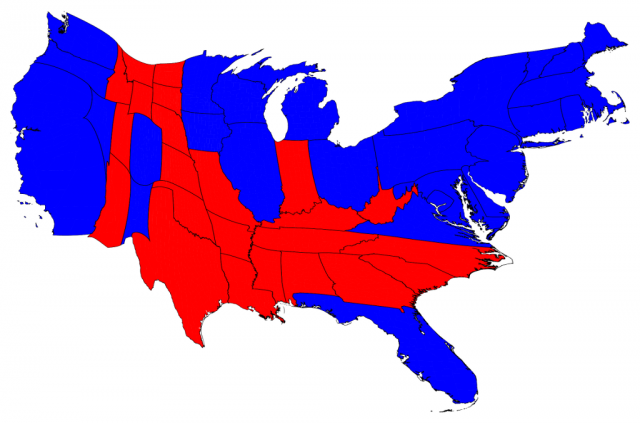 Since that time, the movement has gained steam in Democratic States.

Nothing I have read changes my opposition — even though a good argument could be made that the current system favors Democrats since they are all but guaranteed to pick up the large coastal and industrial states.

I don’t know if the NPV compact among states would help or hurt a particular party, but I’m immedately suspicious when one party is behind so fundamental a change in how we elect a president.

(Featured Image: Effects of the electoral college by scaling the sizes of states to be proportional to their number of electoral votes in 2012, via Mark Newman, Department of Physics and Center for the Study of Complex Systems, University of Michigan)

No one will ever bother to campaign in small states again.

My state of Florida is a solid blue on your election map . All these retired ‘Yankees’ bought it all down with them . They didn’t change one bit . Been watching us slowly go blue for two decades . I need a bigger light bulb !!

My county in southwest Virginia has changed from solid Conservative to about 60/40 in our favor. We are close to Va Tech and get some faculty, and retirees and trust fund babies from the northeast, and of course the “artists” who have taken roost here.

The major problem statewide is the ever expanding Feral Government that brings in leftist bureaucrats from all over. Much like the US as a whole, we are controlled by the more urban areas and parts of their suburbs.

By making voter fraud possible on a national scale, Dems can use both safe zones (districts almost entirely blue) and dispersed cheating to ensure that Republicans (or anyone else) never lose another national election. Would they? Of course they would. They have no concept of the dangers of one-party rule. They’re like the fourth graders who, if made president for a day, would end all war.

This is nothing more than a scheme of the Democrats trying to make sure they never lose the Presidency again.

Fist they change it to the popular vote.

Then they either ram through amnesty and allow newly ‘legal’ citizens to vote, or they just fail to police it in a state like California. Voter fraud would become rampant in large cities.

American law says that you must be in the USA as a legal resident with a green card for five years before you can apply for citizenship. Then, once you apply, you cannot leave the country until the matter has been resolved; if you do, you have to start the process all of again.

How is it, then, that Democrats expect newly legalized illegal aliens to vote without once more violating American law?

When the smaller population states no longer have rights, what are the people there supposed to do – take the abuse day after day?

The National “Popular Vote” initiative will only guarantee an eventual breakup of the country. I don’t think the people of these smaller states will take it lying down.

Article IV Section “The United States shall guarantee to every State in this Union a Republican Form of Government,…”

We lasted this long because the Founders instituted an updated form of Roman Republicanism as a necessary check and balance against the changing whims of Greek Democracy and its violent propensity to elect tyrants.

This may seem counter-intuitive to the argument when there’s currently a tyrant in office. But we’re not longer a Republic if NPV comes to pass.

The comparison of Roman and Greek governance is apt.

You must not be a (relatively recent) graduate from the public school system. I don’t think teachers are allowed to cover things like this anymore.

its purposeful disenfranchising of entire states, yet asking for an id to vote is bad…
the irony burns my eyes.

The interesting thing is that if Texas, for instance, joins the Compact, it presumably will – after suitable wrangling – gain the power to monitor elections in other states to keep fraudulent voting there from affecting the selection of its own electors. This allows for the delightful vision of Texan officials monitoring the GOTV effort in Chicago, a result that may not be what the Compact’s sponsors have in mind.

The Electoral College is like the World Series. Would we really want the winner of the series to be determined based on total points?

All this because of Bush-Gore? Don’t they realize that the popular vote would have been totally different if that election had been based on the popular vote rather than the electoral vote? I don’t know if Bush or Gore would have won, but it likely wouldn’t have been anywhere close to the same result. I live in MA and I voted for Obama in 2008 — the only reason I did was because it was important my wife and any 3rd grader knew my vote wouldn’t have changed the result in Massachusetts. I’m not even sure I voted in the bush-gore presidential election… Perhaps the popular vote would give me a voice that I don’t otherwise have…. Still think it’s a mistake…

You’ll eventually need purple and red states to get this to “work”, fending off numerous legal challenges and the backlash of changing legislative bodies/citizen referendums who will try to back track this.

Imagine a race when a state decided to “back out” out of the compact.

Lastly, the swing states have no incentive to join this compact…..they get way too much money, favors and media attention as it is (just like the early primary states). Why throw it all away because some other states wants to drown out your votes with theirs.

EC Votes is one of the few things Maine does right.

Congressional districts can be gerrymandered. Maybe not so easy in Maine with its few seats, but in Texas, New York or California it’s common and trivial.

NPV could well result in the overall popular vote going to one person overwhelmingly and the EC Vote goes to the other candidate overwhelmingly. Would the NPV loser go down gracefully? What would be the possible recourse that losing candidate could choose?

While that outcome might seem unlikely, it could happen and IMHO would result in an uncivil discourse the likes of which we would never wish to see.

anybody who thinks this is a good idea just stop! go back and read the federalist and anti papers again. the fallacy of this (democracy) was addressed already.

popular vote allows 2 wolves and a sheep to vote on what to have for lunch.

Yet another argument for a return to the Articles of Confederation, which would eliminate the federal government and obviate this nonsense.

Voter fraud counts, all the way down to the Senate and congressional district levels. A coupla Senate seats fraudulently won here and there, and you’ve got yourself a nice little criminal conspiracy you can call a “mandate”.

Missing from your analysis is the Constitutional Compromise that resulted in the Senate and House apportionment schemes. The resulting EC tendency to call near-tie elections in favor of the candidate with the most STATES is not an accident. The election of 2000 was just as the Founders had wished.

No State shall, without the Consent of Congress, lay any Duty of Tonnage, keep Troops, or Ships of War in time of Peace, ENTER INTO ANY AGREEMENT OR COMPACT WITH ANOTHER STATE, or with a foreign Power, or engage in War, unless actually invaded, or in such imminent Danger as will not admit of delay.

I just read the compact and I don’t see a good argument that it’s not states entering into a compact or agreement with other states, and Congress hasn’t approved this. So how is it even legal? The website completely sidesteps this:

And uses the “impairment of contracts” clause to say states would have to comply (not true if the contract is invalid at the start). My observation isn’t original but are there any challenges being pursued under the compacts provision right now?

It’s funny because this would have meant that Massachusetts would have gone for Nixon in 1968 and 1972….