My Generation Needs to be Proactive for Israel

My Generation Needs to be Proactive for Israel

This is my generation’s task 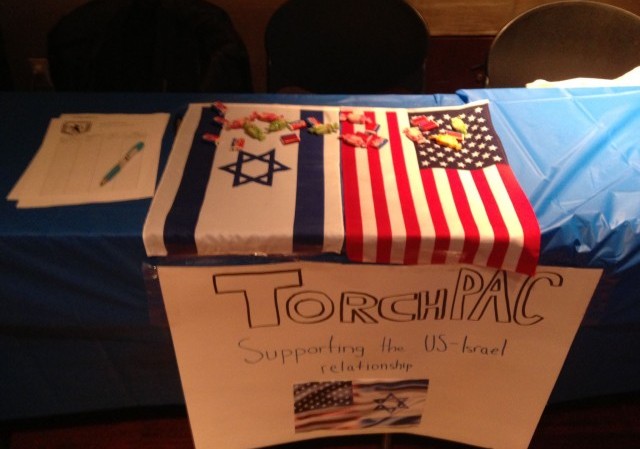 Despite the torrential downpour that unleashed itself over downtown Manhattan Monday evening, nearly 100 students and members of the general public gathered at New York University for an inspiring event that brought together business experts, disruptive artists, media revolutionaries, journalists and jazz musicians.

Innovation Israel, a project spearheaded by TorchPAC at NYU and the Stern Political Economy Exchange (SPEX), proved to be a tremendous opportunity for those in attendance unfamiliar with Israel to experience the incredible spirit and passion of a tiny country in the Middle East, but was also a chance for pro-Israel activists to engage in conversation face-to-face about the challenges facing the pro-Israel community today.

The Innovation Israel showcase was one of the more visible efforts of NYU’s Pro-Israel community this year, but readily visible relationship building and showcasing of Israeli innovation is only one small, small part of the important work being done to defend Israel on US campuses.

Far too often in recent times, extreme voices have made a presence for themselves in the intellectual (or often, pseudo-intellectual) arena; earlier this year, NYU faced strongly anti-semitic activities from NYU professor Lisa Duggan culminating in the form of an Anti-Israel Conference.

Much has been written, most notably by Forbes Contributing Editor of Investigations Richard Behar, that more than adequately elucidates the troubling event and hijacking of the American Studies Association by Duggan and her extreme colleagues in painstaking detail.

Notable Israel detractors Max Blumenthal and Ali Abunimah also spoke at NYU earlier this year, at an event brimming with hatred and rife with factual inaccuracy, including repulsive allusions to the Holocaust.

In his speech, Blumenthal described a place called “Saharonim”, a facility on the border of Israel and Egypt where African refugees seeking refuge in Israel first live, and painted a tale of holocaust-esque roundups and mass starvation. As Josh Voss, NYU Freshman and former IDF soldier who attended the Blumenthal speech recounted:

I’ve seen the facility; my unit prevented smuggling on the the exact border where it is located. I’ve met with Africans who lived there, as they walked into the nearby village Kadesh Barnea to buy groceries, the same grocery store where I used to buy hummus and apples. If Israel was starving them, it was definitely doing a horrible job. No one, especially not the Sudanese and Rwandans that live there will tell you they’re being rounded up and starved to death.

How does one even begin to counter these foul distortions of reality?

Organizations such as CAMERA (Committee for Accuracy in Middle East Reporting in America) do an incredible job of countering bias in the mass media, though this fight is one that unfortunately requires vast resources as well as constant vigilance.

In order to counter the smear campaign against Israel taking place through Duggan at NYU, TorchPAC organized meetings with the NYU administration and authored an open letter to NYU President John Sexton that called for the administration to “begin to take a serious look at… the policies and practices of the ASA.”

Pro-Israel organizations can be generally divided into two camps: those that primarily work towards relationship building and promoting Israel’s modernity as well as strategic importance, and those that primarily work to correct historically and factually inaccurate depictions of Israel in the public narrative. These different arenas are traditionally thought to require very distinct strategies. But what if we were to question the narrative that these aims could not be accomplished concurrently? What if Pro-Israel groups formulated their 5-year plans around making strides in both vital arenas?

Let me be frank: ideas being used in the battle raging on our campuses and across the world concerning the legitimacy of the state of Israel, as well as the outright lies perpetrated by the likes of Duggan and Blumenthal with the express purpose of delegitimizing the state of Israel, are laced with far-too-much emotional venom to be effectively countered with either relationship building or sterile cerebral arguments alone.

Our movement is stuck in the defensive, with no fully coherent strategy; today’s consumer is assailed by misinformation and hard-hitting emotional arguments from the anti-Israel camp in too many arenas for disjointed efforts be adequate.

This generation’s challenges will require a reinvigorated effort in the Jewish community that results in a revamped strategy which many people on either side will be uncomfortable with, but which represents our only hope of defeating anti-Israel sentiment on today’s campuses. If we are to expect people to take Israel seriously, we have to show them that Israel is serious; with such an uneven playing field, we need to step up our game and pull ourselves into the real world, where facts are always considered along with feelings.

A campus charm offensive where we avoid facts will be futile, but as much as it pains me as an intellectual and truth-seeker to say, so too will even the most meticulously executed correction of the anti-Israel movement’s distortions of fact if anything beyond the purely “factify-able” is ignored. In the words of Jackie Retig, NYU Senior and Co-Chair of Campus Relations for TorchPAC:

Torchpac strives to find a balance between political activities, such as meeting with members of Congress to discuss issues pertaining to the U.S.-Israel relationship, with events that reach a broader student body through showcasing Israel’s unique opportunities and innovation. In this way we hope to strengthen our ties with Israel across different communities and through new avenues.

As a Pro-Israel community, we have allowed ourselves to become complacent and self-polarized; many of us choose to treat our Israel either as a doting mother would her child, ignoring the flaws while showcasing every success, or as an aloof professor would treat a sloppy essay, shaking his head as he slashes through inaccuracies with his red pen and adds painstaking commentary, never realizing that his pupil will take one look at the returned assignment and toss it into the trashcan.

This is my generation’s task: not only to redefine the narrative on campus, but to revamp and revitalize our Pro-Israel organization and way of thought. We will only be remembered as a compelling and proactive generation of advocates for Israel if we are able to reunite facts with feelings and execute a strategy which always considers both.

I would be remiss if I did not mention those who provide so much wisdom and encouragement; I am continually inspired by the tireless efforts of Contributing Editor for Forbes and unwavering investigative journalist Richard Behar, the indefatigable Dr. Charles Jacobs, the wonderful people at Committee for Accuracy in Middle East Reporting in America (CAMERA), AIPAC, and The David Project, and the efforts of my fellow TorchPAC and TAMID Israel Investment group members at New York University who work to strengthen the US-Israel relationship every day.

——————————–
Laura Elizabeth Adkins is a sophomore at New York University studying Economics and Hebrew Judaic Studies. She is the rising President of TorchPAC (NYU’s Pro-Israel Advocacy Group), blogger for Times of Israel, and a 2014 fellow for TAMID Israel Investment Group.

One of the things to educate aggressively on, even at the micro level, is the Holocaust. Not just in terms of what it was and the numbers slaughtered, but, more significantly, with regard to who was involved and who all would’ve been targeted.

The Hitler-Himmler-Husseini nexus needs to be broadly publicized and explored at great and uncomfortable length: the assistance Husseini offered Himmler, his flight from Israel to Germany during the war, his volunteering of Muslim troops to assist with the genocide, his request to Hitler to open a front of the genocide in Israel. This sets Israel’s enemies back on their heels and puts them squarely in the camp of Nazi genocidal murderers. How can you be fighting for “social justice” when you are on the side of the same people who made common cause with Nazis, to the extent of sending Arab troops to Hitler? Make exhibitions of the pictures with Husseini and Hitler in Germany–those images are out there. Use them.

Remind the people of the world, the non-white ones especially, that Hitler would’ve just begun to rock after the completion of the Final Solution. In his crosshairs were anybody not of Aryan blood. Can you say, “hello, hello, Africa! India! China!”? Make a big noise about this, too. Why? During the Crown Heights riots, some ignoramus was heard to say, “Hitler should have finished the job!”, totally unaware that had that been the case, he would not have been around to voice his support of genocide because his ancestors would’ve been subjected to the same.

In this context, draw a clear line between Hitler’s intended victims and Husseini’s support of genocide. Draw connections to Islamic aggression in Darfur, Kenya, New York. Bring it home to change minds. The same people who wanted to commit genocide of the Jews back then are the same people wanting to do it today.

The only way to rock their world is to educate with graphics and historical fact. Make people choose. With whom will you stand? Those who supported Hitler and have trained terrorists today to goose step and make the Nazi salute, and who would kill you to achieve their aims, or with Israel.

This is no play for the shy and retiring. It’s for the aggressive.

Fabulous article, kol hakavod for all the work you are doing and thanks for sharing your insight and activities.

Another area of education has to be the advertising campaign of Hamas. Hamas is one of the spawn of the Muslim Brotherhood, and its charter specifically includes an advertising campaign to convince Muslims that they have an individual, religious duty to kill every Jew on the face of the earth, and re-conquer every square inch of land ever held by a “Muslim” regime.

Because the vast majority of Muslims still require a reason to kill their neighbors, and because the Jews in Israel have not supplied such reasons, Hamas has resorted to making things up: from historical lies to fauxtography to false accusations of atrocities (done by Hamas itself). Even the outrage of the so-called Cartoon Wars was based on lies: the muslims in Denmark were not stirred to action, so the foreign clerics took their act overseas, along with added cartoons that were more outrageous and a pack of lies about how Muslims in Denmark were being mistreated. When they finally got far enough away from the truth, they were able to provoke outrage.

Take heart. It means that while your enemies are vicious and dangerous, there are fewer of them than you might think.

This is a battle you can win.