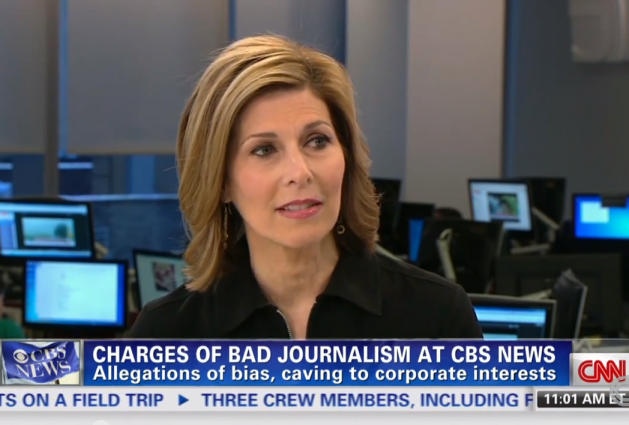 Media Matters, as my understanding, is a far left blog group that I think holds itself out to be sort of an independent watchdog group. And yes, they clearly targeted me at some point. They used to work with me on stories and tried to help me produce my stories…

And I was certainly friendly with them as anybody, good information can come from any source. But when I persisted with Fast and Furious and some of the green energy stories I was doing, I clearly at some point became a target… [Emphasis Added]

Of course, anyone who has read Media Matters would scoff at the idea that it is a politically “independent” media watchdog group.

Given the obvious leanings of the organization, the revelation that Media Matters is actually assisting, in some manner, in producing content for one of the “Big 3” (ABC, NBC, CBS) network news programs carries significant implications. Most notably, these three networks are still viewed by many in the public as the place to get your least politically slanted news. For many Americans, the brief 30-minute or hour long nightly news program from these networks is the only news they get all day.

In the immediate wake of Attikson’s Sunday appearance, Media Matters elected only to respond to the assertion by Attkinson that she had been targeted by the organization:

Sharyl Attkisson is continuing a pattern of evidence-free speculation that started at the end of her tenure at CBS. We have never taken contributions to target her or any other reporter. Our decision to post any research on Attkisson is based only on her shoddy reporting.

In explaining away the targeting claims as baseless, Media Matters neglected to respond to the more subtle assertion by Attkisson that it worked with her, as she phrased it, “to help me produce my stories.”

If it’s also creating content that the Big 3 network news programs are presenting as “politically neutral,” the American people have a right to know. This is especially so given the new direction Media Matters publicly announced, after declaring victory in its self-described “war on Fox News.”

According to its strategic plan for the next three years, a copy of which was provided to The Huffington Post, Media Matters envisions shifting its focus to new, increasingly influential targets, including Spanish-language media, social media streams, alternative online outlets and morning and entertainment sources. It will enhance its state media and issue-based monitoring, as well as continue its focus on right-wing radio and legacy outlets. [Emphasis Added]

Irony abounds. Media Matters, the organization that began as an effort to expose right-wing bias in media portrayed as “fair and balanced,” may now be engaging in the inverse of the very thing it sought to prevent through its cooperation with news outlets like CBS.

Who needs the Journ-o-list when you have Media Matters writing and editing for you?

Isn’t this the very definition of native advertizing? CBS has officially become a subsidized arm of the DNC.

Was Atkisson’s real sin at CBS that she rebuffed Media Matter’s more excessive advances? Who else has been using Media Matters material, and passing it off as their own?

This looks like a job for the National Enquirer.

Not stunning at all. Breitbart said it four years ago.

Wasn’t the coked-up dude over there (can’t remember his name) caught on tape saying they orchestrated the primetime lineup at MSNBC? It would explain who fed a ridiculously edited video of Megyn Kelly calling Harry Reid a terrorist. At least Mediaite pointed out the deception: http://www.mediaite.com/tv/did-ed-schultz-edit-megyn-kelly-to-make-it-look-like-she-called-harry-reid-a-terrorist/

You know what else about this Sharyl Attkisson Story: Never let a Rule 5 opportunity go to waste… And the more focus on Media Matters and the bias at the lame stream media, the better.

We KNOW there is a closed loop between the moonbattery, the White House, and the Mushroom Media!

Only the unaware would find the Attkisson story revelatory.

I’ve read that people closely connected with the White House have frequent conference calls with selected journalists to discuss how stories will be packaged.

I don’t doubt it for a second, considering that people in this administration have openly said they’ll “use legitimate media” to promote their agenda — implying that serving a certain political agenda is a legitimate function of the news media, and those that don’t play along are not legitimate.

One of the funniest things that Rush Limbaugh does is play audio montages of six or eight or ten broadcast “journalists” using the same phrases or uncommon words to describe a current news event. Of course they’re reading from the same script.

Media Matters needs to shut down.

Don’t hold your breath! As long as Soros has the money, Media Matters will prattle on.

A news organization would not allow a political group (or anyone else) to shape its reporting. A journalist has enough trouble eliminating their own bias without having to wade through the swamp of someone else’s. You listen to your source, assume it’s all a lie, then try to confirm what might not be.

That is one of the issues that troubles me. As a younger man I read newspapers like the Tribune, the Daily News and Sun-Times in Chicago. I knew that most of the reporters and editors were fairly liberal, even at the Trib, but I also knew that each of them would KILL for a story. There wasn’t a chance in the world that they’d let the cross-town rival get an exclusive.

Now we have Journolist which coordinates the outlook, responses and indeed key phrases of the insiders. What that really means is that they are defrauding their employers — they aren’t doing the work of getting a story first and right, they are instead, nod-nod, wink-wink, colluding to make every news outlet read and sound the same.

Likewise with Media Matters providing (apparently) source material, writing and editing to reporters and editors throughout the major markets. Why work hard to develop an exclusive when you have people who will spoon feed you what you need for tomorrow’s story, and then applaud and tell you what a good job you did? People who will, in the future, hold open doors to advance either in the media or sideways into a cushy government job, and then back to a better job in the media?

Reporters used to be go-getters — cynical, ornery, wise-cracking know it alls who really had seen and done a lot. Now they’re just another part of the nomenklatura.

Ms. Atkinsson was a tool until she decided she didn’t want to be a tool anymore. She’s paying the price for it. What proportion of the rest are tools?

Well, Dr. Steve, the MSM has cut back on their reporting staff, so they have their fellow travelers write the script and do the “research” for them 🙂

As if there’s any real difference between the two.

I thought the IRS beleived that any involvement in politics by these groups had to be investigated and stopped. Any bets on whether the IRS ever investigates Media Matters?

For news I watch the three major stock market indexes and Neil Cavuto’s Fox Business show in the evening. I can see what stock futures are doing. I watch CNBC’s Worldwide Exchange in the morning while I’m getting ready for work. I’ll watch Squawk Box if I’m working at home.

I used to watch Larry Kudlow in the evening but he has since retired from his weekly show. I liked his take on things economically. Bwaaaa.

The indexes don’t lie (if everything is plugged in and communicating properly).

The info may be delayed because of HFT but I am holding anyway. I’m bullish on America. News comes and news goes.

Sorry, but it’s not Media Matters that needs to come clean. Their stated mission is to influence media coverage, and it’s long been apparent that they are sometimes successful. It’s the purportedly neutral media outlets that allow themselves to be used as megaphones for Media Matters’ fringe messages that need to come clean.

Actually, if you read their statement, MMFA did not deny targeting Attkisson. They denied taking money to target her.

True. You can’t call them political whores if they do it for free.

So we have political minders overseeing the production of “news”.

Welcome, folks, to the United Soviet of America.

It’d be like trying to wash the stickiness out of hard candy.