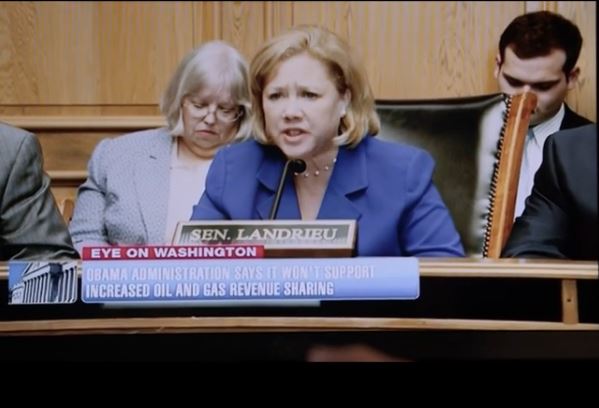 So much about this Mary Landrieu ad is fake.

Start with her attempt to distance herself from Obama. Yeah, that’s believable. She has been a loyal soldier on just about everything.

But what’s getting the most attention is her fake, reenacted Senate hearing segment, via The Weekly Standard:

The reenactment fixes a verbal flub from Landrieu’s original speech. Originally, she said “Do you think there are a bunch of fairy godmothers out there that just wish a magic wand?” The line is cleaned up for the campaign ad.

There are clues from the ad that the clips of her talking tough on energy are from a reenactment. Landrieu is wearing a different jacket and has a different haircut. Her nameplate that reads “Sen. Landrieu” is a larger size, and the aides sitting behind her are different, in a room that is clearly not the Energy and Natural Resources Committee hearing room.

Landrieu is in a tough reelection battle against Republican congressman Bill Cassidy and other candidates in Louisiana’s open primary. If she is unable to break 50 percent support in the November primary, she’ll most likely face Cassidy in the December runoff. In the Real Clear Politics average for the head-to-head matchup between Cassidy and Landrieu, Cassidy holds a 2.4-point lead. 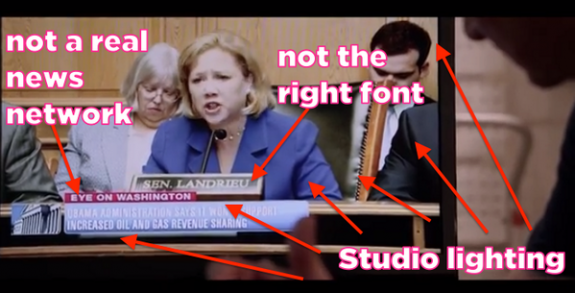 Time to pluck the chickens, melt the tar, and sharpen the pitchforks.

Given her size, and the size of her lies, Jumboliar also works.

“I’m not a counterweight to this administration, but I play one on TV ads.”

Half expected to see Three Dog Night’s Jambalaya as video of the day.

Gotta downvote you on that. TDN never covered Jamabalya AFAIK. That is Shambala.

You may be thinking of CCR, who did cover Jambalaya.

The thing that struck *me* about the photo was that poor deformed man sitting behind Landrieu, whose nose looks like an elephant trunk and drops all the way down to his pants …

Yes! What the heck is that? And how come there’s no arrows pointing to an obviously Photo-Shopped penis?

I that that was “The Portrait of Mary Landreu’s Nose.”

This administration and the lap dog press have become so fond of Photo-Shop you’d think we were ruled by Iranians! 😉

Don’t you just love the smell of Democrat desperation in the morning?
It smells like…a (R)controlled Senate!

At this point in the race, the actual numbers aren’t necessarily predictive, but the trend for Landrieu is clearly down, and after this phony ad is dissected and refuted, her reputation will not be enhanced.

She votes with Obama roughly 88% of the time. She hasn’t opposed him or Reid on a single issue where her opposition would have been meaningful.

While Louisiana now assume she is suddenly going to fight against the Obama War on Fossil Fuels? Does a skunk change her stripes?

I like how the mechanic at the end comes in to wash his hands……he is obviously an actor because any mechanic worth his weight in salt knows that hot water is what you wash your hands in.
Another great example of election-year flipfloppiness is our own Lindsey Graham…..I love his latest radio ads where he “name-drops” TRUE conservatives Trey Gowdy and Tim Scott.

For her next ad, she will joust a sock puppet Obama for the honor of the downtrodden Louisianans.