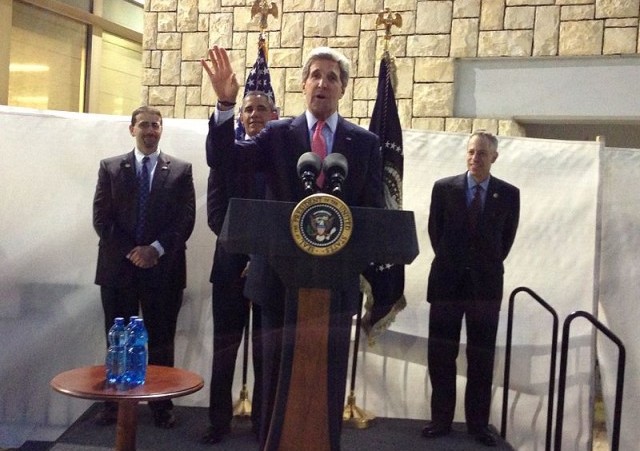 From Adam Kredo at The Free Beacon, Top [U.S.] diplomats planted anti-Israel reports in lead up to peace talk collapse:

The Obama administration has been waging a secret media war in capitals across two continents blaming Israel for the recent collapse of peace talks with the Palestinians, according to former Israeli diplomats and Washington, D.C. insiders familiar with the peace process.

Multiple sources told the Washington Free Beacon that top Obama administration officials have worked for the past several days to manufacture a crisis over the reissuing of housing permits in a Jerusalem neighborhood widely acknowledged as Israeli territory.

Senior State Department officials based in Israel have sought to lay the groundwork for Israel to take the blame for talks collapsing by peddling a narrative to the Israeli press claiming that the Palestinians were outraged over Israeli settlements, the Free Beacon has learned.

These administration officials have planted several stories in Israeli and U.S. newspapers blaming Israel for the collapse of peace talks and have additionally provided reporters with anonymous quotes slamming the Israeli government.

The primary source of these multiple reports has been identified as Middle East envoy Martin Indyk and his staff, according to these insiders, who said that the secret media campaign against Israel paved the way for Secretary of State John Kerry to go before Congress on Tuesday and publicly blame Israel for tanking the talks.

It makes sense. The John Kerry clown show has so mangled things, talking out both sides of the clown car, that the end result of Israel taking the blame was a foregone conclusion.

These talks mean nothing to [the Palestinians]; they’ve done nothing to advance negotiations in all these months. They’ve moved on nothing, agreed to nothing, made no goodwill gestures toward Israel or the United States.

And Kerry? He’s basically fine with this. He’s full of understanding. He understands it would be difficult for Mahmoud Abbas to acknowledge Israel as a “Jewish state,” so he doesn’t act as though Abbas’ refusal to do so says anything about Abbas’ viability as a negotiating partner.

But Kerry doesn’t want to know. What he wants is a Nobel Peace Prize he’s never going to get.

That’s why he started this ludicrous process in the first place — to secure himself a consolation trophy after his humiliating defeat at the hands of George W. Bush in the 2004 presidential race.

Now, here is John Kerry’s monument: By whoring after a deal he couldn’t get to satisfy his own wounded pride and fulfill his own vainglorious wants, he has been exposed for all to see as a deceitful, pompous, self-righteous and vindictive fool — not to mention a world-historical two-time loser.

Sad to say, there is nothing “comical” about Kerry as Sec. Of State and Hagel as SecDef.

I also blame Rand Paul for helping to confirm this clown into office.

Now, we have to bribe both side to stay at the table.
I would expect nothing less from an Administration that has no rspect for the law, than to release Jonathan Pollard.

Isarel should remember that next January, Obama will be a lame duck and therefore they should just stall him and Kerry by playing “rope-a-dope”.

It was a huge mistake for Israel to release murderers just so the Palestinians would show up at “peace talks”.

Neo – if Pollard had been helping any other nation (particularly Saudi Arabia) he would not have spent a day in prison let alone 29 years (both Democrats and Republicans – particularly the Bush family – being wholly owned subsidiaries of the House of Saud).

The USA should not support bigots who are saying: “No Jews allowed to build here”.

Jimmy Carter quoted today as saying Clinton did little or nothing as SoS. Cool. Even a blind squirrel, etc., etc. Then he ruined it by adding that Lurch, however, is doing a fine job. As evidenced by….???

I’ve been following the talks very closely, especially the two weeks or so.

Abbas did his part by reacting too quickly.

But not releasing the Palestinian terrorists (call them what they are) according to the agreement and then offer a big FU to a tender for 700 more housing units was extremely stupid and the principle cause.

Baloney! First, Gilo is in Israel and will always remain in Israel so claiming that building homes there is a fake issue. Second, Israel was under no obligation to free terrorists, it signed no agreement and it is obvious to all those who unlike you are not blinkered that the PLO was just interested in freeing murderers so they could start another terror round. Israel has freed far too many filthy Arab murderers as “good will” gestures and gotten nothing good in return. Kerry can drop dead many times over.