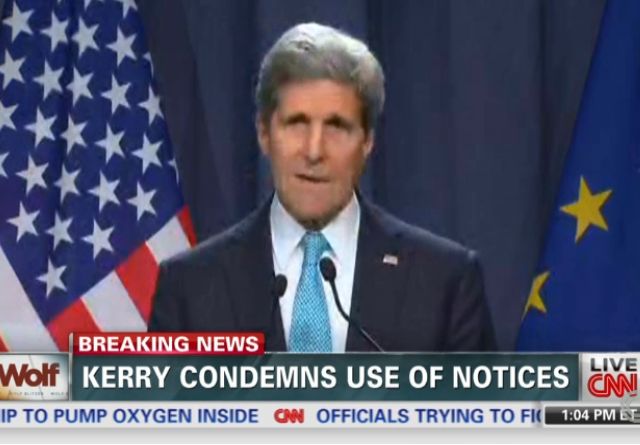 Earlier Thursday, reports surfaced that leaflets were distributed earlier in the week in the eastern Ukrainian city of Donetsk demanding Jews register with a government office.

We waited to report the information here at Legal Insurrection because of conflicting reports on the story and questions about the authenticity of the leaflets.

And then of course, there is the question of whether this is part of a propaganda campaign from one or both sides in the ongoing conflict in Ukraine.

Let’s start with the earlier reports.

Here is an earlier article from USA Today:

Jews in the eastern Ukrainian city of Donetsk where pro-Russian militants have taken over government buildings were told they have to “register” with the Ukrainians who are trying to make the city become part of Russia, according to Ukrainian and Israeli media.

Jews emerging from a synagogue say they were handed leaflets that ordered the city’s Jews to provide a list of property they own and pay a registration fee “or else have their citizenship revoked, face deportation and see their assets confiscated,” reported Ynet News, Israel’s largest news website.

Donetsk is the site of an “anti-terrorist” operation by the Ukraine government, which has moved military columns into the region to force out militants who are demanding a referendum be held on joining Russia. The news was carried first by the Ukraine’s Donbass news agency.

The leaflets bore the name of Denis Pushilin, who identified himself as chairman of “Donetsk’s temporary government,” and were distributed near the Donetsk synagogue and other areas, according to the reports.

Secretary of State John Kerry condemned the leaflets, regardless of where they came from.

Jews in one Ukrainian city were sent notes “indicating that they have to identify themselves as Jews,” U.S. Secretary of State John Kerry said Thursday.

“In the year 2014, after all of the miles traveled and all of the journey of history, this is not just intolerable, it’s grotesque. It is beyond unacceptable. And any of the people who engage in these kinds of activities — from whatever party or whatever ideology or whatever place they crawl out of — there is no place for that.”

Earlier reports, including the USA Today article (citing Ynet), claim that “Pushilin acknowledged that flyers were distributed under his organization’s name in Donetsk, but denied any connection to them.”

Other reports quote Pushilin as blaming others who wish to make the separatists look bad and provoke more trouble.

From NY Magazine (yes, that’s a ThinkProgress link below, but relevant):

But Denis Pushilin, the Russian separatist whose name is on the flyers, claims he has nothing to do with them, and that the documents were spread to make his side look bad.

“Evasion of registration will result in citizenship revoke and you will be forced outside the country with a confiscation of property,” reads the flyer, according to a translation. It also lists a $50 fee for doing so.

“Some idiots yesterday were giving out these flyers in targeted areas,” hoping “to blame the attack on separatists,” said Pushilin.

The Daily Beast also noted that when a reporter went to the building and room indicated on the leaflet to check things out, the office was empty.

Mashable later published a statement from the Anti-Defamation League questioning the authenticity of the leaflets while also condemning the messaging.

“The ADL today condemned the appearance of anti-Semitic fliers in Donetsk, Ukraine, and called on all parties involved in the political conflicts in Ukraine to refrain from ‘cynical and politically manipulative’ exploitation of anti-Semitism,” said Abraham H. Foxman, ADL National Director.

“We are skeptical about the flier’s authenticity, but the instructions clearly recall the Nazi era and have the effect of intimidating the local Jewish community,” he said.

“We have seen a series of cynical and politically manipulative uses and accusations of anti-Semitism in Ukraine over the past year,” said Mr. Foxman. “The perpetrators and their targets are opposing politicians and political movements, but the true victims are the Jewish communities. We strongly condemn the anti-Semitic content, but also all attempts to use anti-Semitism for political purposes.”

CNN offered information about conflicting reports in this video report:

The situation in Ukraine has presented many challenges in reporting, as details are often murky and reports and facts often difficult to confirm, on all sides of the conflict.  They also frequently change throughout any given day (sometimes after I’ve already written a post).

Many of the facts in this case too still remain unclear at this time.

Perhaps what’s most important in this particular story is that wherever the leaflet came from, whatever its true intended purpose, it deserves condemnation.

Perhaps in early Soviet evolution; and still later where it was grounds for discrimination. It’s unfortunate that people, Russian, Ukrainian, etc., extrapolated from the complicity of individuals to condemn whole groups merely by an unrelated affiliation; but, it was never universal, and those individuals who did not participate, and many who actively opposed it, both in and out of government, should be recognized for their morally upstanding nature.

IF this is true – the truly terrifying part is the part where they tell them not only to register, but to register their property in a detailed list.

WHY would you ask anyone to do that, unless you were about to take all their crap!?

No Ls , property is just that , the taxman asks that each year in almost every nation. The biggie is the citizenship ‘threat’ . I would think Jewish are knowlegeable on this . Districts don’t give them out or take them away . It is extremely rare for nations to revoke indigent citizenship.

That a US Sec of State has bought into this is just pathetic .

This would be an unforced error by the Russians, wouldn’t it? It may well be sponsored by some aggrieved group, but why would the greater number shoot themselves in the foot, when they clearly occupy the higher moral ground.

The short, violent history of the Western-backed coup suggests that this is an act perpetrated by their interests. Perhaps that’s why ADL is moderating their condemnation.

An unforced error on the day of international talks.

WHATEVER the reason or intent of this request for their religion (specifically being Jewish) and list of their property does not bode well for those people. It’s completely unconscionable that this would be done this day and age. The fact that even the Sec of State got involved in a good thing – not bad as you suggest. The “tax man” never targets a specific religion – at least not yet. In the U.S., the tax authority does target specific political parties evidently – where Americans can’t seem to decide if that’s a good thing or not…pathetic.

As I posted yesterday , this has sent people into an IQ black hole of emotionalism. A piece of paper handed out .

Anti-Semitism in Ukraine, east and west, is very real, and there are definitely anti-Semitic sentiments in the pro-Russian camp. I can cite multiple examples of that just by looking at their social media (I won’t because I don’t have the time).
But a leaflet is a leaflet. There were anti-Russian leaflets distributed in Kharkov (and probably elsewhere, too) signed by Pravy Sektor for which Pravy Sektor denied responsibility. They did march through the streets, though, chanting “Slash moskals with knives” and “Mosklas to the gallows” which prompted a lively discussion among the “pro-Western” types that moscal is not a nationality, but a state of mind. What follows is that it’s OK to lynch the types who have certain ideas that we don’t like. Anyhow.
Jews in Ukraine are sitting ducks.

At least there are some still there. unlike Poland.

A sliver. Those areas, most of them the former Pale of the Settlement, were something like 10% Jewish. They are now around .01% Jewish. The Jews left there are extreme outliers.

From New Republic:
http://www.newrepublic.com/article/117415/relax-ukraine-not-ordering-its-jews-register
I mentioned a few minutes ago, an unforced error on the day of multi-party talks. Hmmm….
It’s very hard to figure out what’s really happening there. Russians say one thing, Ukrainians say something completely different. Western media sources either file local (read Ukrainian stories) or fly in reporters to photograph cute girls, who, I suspect, are contracted from a Kyiv modeling agency. Social pages of Ukrainians are nothing like what we see in Western media.

I’ve been reading around & can’t work it out. That to me looks like a Russian play .They are Masters in these sort of agreements eg Yalta , Syria. If they are given responsibility for ‘deescalating ‘ then they must be able to send in / promote .

so technically would this be an anti-antisemitic canard? This has the earmarks of a poorly done black propaganda campaign designed to smear the pro-russian side and encourage foreign involvement.

Just ask yourself this question. What would Russia have to gain by this and what would they have to loose? The Russians are very slick in terms of foreign policy and this is not the kind of mistake that they would be making at this moment.

Slicker than you/we know. Think about it. If this is traced to Putin/Russia, American Jews and their supporters will bring great pressure on Obama to do something about it. They wouldn’t have to actually follow up on it and would have never intended to. They just dangle it out there till the pressure is brought onto Obama, then sit back and laugh. It would be like Putin put a whoopie cushion on Obama’s Oval Office desk chair.

Putin is not stupid enough to actually register and round up Jews in Ukraine (at this juncture, anyway), but he’s certainy callous enough to badly scare them just to stick one in Obama.