It’s the bureaucracy, stupid, and not just at the IRS 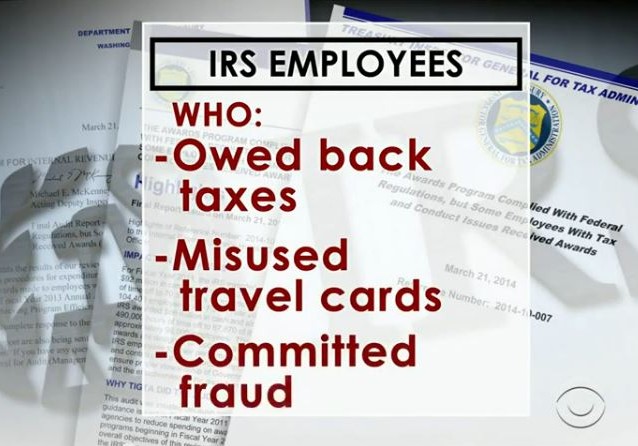 In the world of federal Inspectors General, there are some evergreens in agency oversight. There are federal employees in every agency who periodically misuse their official credit cards, use their workplace computers to look at pornography, or fail to pay their taxes in timely fashion.

Indeed, every year, there are news stories about the number of federal employees at each agency with tax delinquency issues. An IG can expect to find evidence of such misconduct by conducting an audit or investigation every couple of years or so.

Monday, the Treasury Inspector General for Tax Administration (TIGTA), issued a report demonstrating that truism and disclosing that:

The report explains that “the most serious conduct issues included late payment and/or nonpayment of Federal taxes, Government travel card misuse or delinquency, Section 1203(b) violations, misconduct, and fraud issues.” Section 1203 of the 1998 IRS Restructuring and Reform Act provides that certain acts or omissions can be the basis of a removal for cause for misconduct. “Drug use and violent threats” are examples of misconduct, and “fraudulently claiming unemployment benefits and fraudulently entering attendance and leave on timesheets” are examples of fraud.

The report includes the following table showing the extent of the problem:

By any measure, these acts cannot be regarded as good conduct. So what should the agency do? Giving the employees awards and other benefits hardly seems to be the way to go.

To its credit, the IRS says that it may withhold awards on a case-by-case basis or when an event generates adverse public attention.

The report states, “For example, IRS officials mentioned that awards to all Exempt Organizations function employees within the Tax Exempt and Government Entities Division would be withheld due to the ongoing investigation into the inappropriate criteria used to identify tax-exempt status for review.” In other words, the folks who slow-walked applications for 501(c)(4) status from tea party groups will have to wait to get their bonus.

Significantly, it was TIGTA that uncovered the targeting, but Lois Lerner planted a question to be asked after Lerner spoke on a panel at the annual meeting of the American Bar Association’s tax section and got the news out before the TIGTA report became public.

Likewise to its credit, the IRS said that its Human Capital Officer will “conduct a feasibility study by June 30, 2014, for the implementation of a policy requiring management to consider conduct issues resulting in disciplinary actions, especially the nonpayment of taxes owed to the federal government, prior to awarding all types of performance and discretionary awards.”

It’s not just the IRS, and the IRS has union issues that other agencies may or may not have.

As the report explains, there are no government-wide policies that tell agencies whether or not to withhold performance benefits from employees with “substantiated conduct issues.” And, while it contains Section 1203(b), the 1998 IRS Reorganization and Reform Act doesn’t tell the IRS what to do. Worse for the purposes of the IRS, its contract with the National Treasury Employees Union states, “The fact that an employee is the subject of a conduct investigation or has been the subject of a disciplinary action during the rating period will not preclude a performance award unless such preclusion is necessary to protect the integrity of the service.”

Every agency IG should undertake the same investigation that TIGTA did in this case. Likewise, they should push the agency to follow up with their employees with tax problems to make sure that those employees are making progress on their resolution.

And, Congress should instruct all federal agencies not to reward federal employees who misbehave, overriding union contracts if necessary.

“Every normal man must be tempted at times to spit upon his hands, hoist the black flag, and begin slitting throats.”

“…there are no government-wide policies that tell agencies whether or not to withhold performance benefits from employees with “substantiated conduct issues.” And, while it contains Section 1203(b), the 1998 IRS Reorganization and Reform Act doesn’t tell the IRS what to do.”

Pretend this is a Bar Rescue: Start with common sense, follow up with more common sense, jump up and down and then fire the miscreants. Don’t ever give my tax money as a bonus to untrustworthy employees! Ever!

“The fact that an employee is the subject of a conduct investigation or has been the subject of a disciplinary action during the rating period will not preclude a performance award unless such preclusion is necessary to protect the integrity of the service.”

I want to say that this is as stupid as it gets but with government I know better.

This is only more government CYA BS.

If you ‘people’ want “to protect the integrity of the service” then kick some ass. Lois Lerner should have been gone a long time ago.

One would think that during the time of an investigation of an employee under probation that no awards would be given to said employee until all the allegations were proven to be false. This would protect the integrity of the service, validate the employee in the end and hopefully keep my tax dollars from…Democrat coffers.

Their union will insist that the monies keep flowing, in part to the union.

One of the quirks of human nature is that you will get more of any behavior you reward and less that you punish.

If this is the level of behavior that gets rewarded, I can’t imagine what the people that did not get the mandatory “bonus” and paid time off did to not qualify for theirs.

The management gamed the system to get their employees raises without having to go to Congress and justify it. Sure wish my manager could do that.

Not surprising to see the system taking care of themselves with the benefit of “my” / “your” tax dollars paid in and accounted for this past month. Knowing those dollars are spent so incompetently by this administration has left me rethinking what I and probably others are going to be doing this year as creative accounting rather than to continue to feed the I.R.S. kitty. My fair share seems to be their entitlement program.

Why do government employees even get bonuses? It also makes me wonder how much pension spiking is going on at the Federal level.