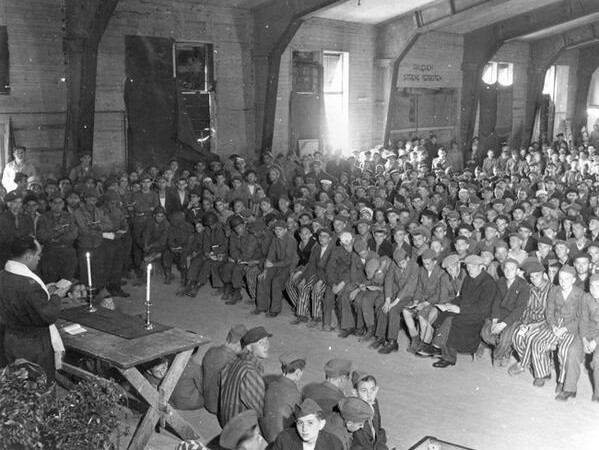 A two minute siren is sounded in Israel and everything comes to a stop.

On this day we remember not only the 6 million Jews, but the millions of non-Jews killed by the Nazis, the “righteous gentiles” who risked their lives and the lives of their families to hide and shelter Jews, and the soldiers who liberated the camps.

Like Vernon Tott and others, about whom we wrote in 2009:

I think of Christian Americans like Vernon Tott of Iowa who not only liberated concentration camps, but took the time thereafter to bear witness to what he saw (and decades later to reunite with one of the prisoners he liberated):

“I was a radio operator in the Infantry and on April 10, 1945, we were going to attack Hanover, Germany. Early that morning I was sitting in my radio jeep with Capt. Reed, at a crossroad, west of Hannover. After the sun came up we could see down a dirt road that someone was waving to us. Capt. Reed thought these people might be American POW’s so he told me to drive down to them. A couple truckloads of riflemen came with us. When we got there we could see that it was a Jewish slave labor camp (Ahlem). What we saw inside of the camp was Hell on Earth.”My memory of what we saw when we first entered the camp was the pile of dead bodies. The men alive were in ragged clothing and they were just skin and bones. They came towards us with smiles on their faces. They knew their horrible nightmare was finally coming to an end.

And of the black Christian American soldiers who, though facing discrimination at home, helped liberate the camps: 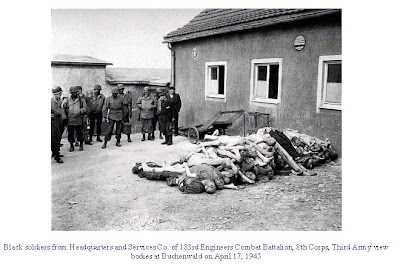 And the soldiers in these images:

In https://t.co/DEOPhjALtw, the small child sitting between two U.S. soldiers on the left is Israel Meir Lau, later Chief Rabbi of Israel.

With anti-Semitism never having rested, and growing particularly in Europe, it’s necessary to remember.

Some of us still say, “Never again”, and mean it.

The world community doesn’t else this day would require a special remembrance program in schools everywhere. If they did, Obama and Kerry, the EU would not be funding Islamic terrorism. If they did, George Soros who lived through it would not be seeking to destroy Israel.

Today is a day to remember Anna and Jaruslav “Jerry” Chlup, the Czech couple who saved, hid, and nursed back to health my friend Herman Feder.

Please read their story, and Mr. Feder’s (both links on the page). It’s truly amazing and inspiring.

Humanity at its finest.

My mother was 1/2 Czech and 1/4 Jewish … which I’m sure was a big plus in addition to her sweet nature why Mr. Feder adored her.

I have to say about that video, that’s the first instance of performance art I’ve seen that I not only like, but which got me a bit teared up.

Thank you for sharing this story. I’m crying as I type this, we just can’t fathom such evil and yet the humanity of individuals shines out and inspires.

I hope I don’t irritate Professor J by posting this again (I’ve posted it a couple times before) but this tells the story, really, why I, a gentile, am so completely pro-Israel.

I’ve said it before and I’ll say it again, every gentile boy growing up should be so lucky to have a friend like Mr. Feder. I miss him and my mother so much. They taught me much more than I could ever learn in school.

If only the maddening, obnoxious BDS kids had known a Mr. Feder growing up (and had a mother like mine 🙂 )

When you have the time. It’s kind of long:

I am reminded of the German Lutheran pastor Dietrich Bonhoeffer. He spoke against the evil that was happening around him. He was ultimately hanged by the same evil.

Few know that the son of the great Nobel-Prize winning German physicist, Max Planck, Erwin Planck, was executed for his part in the assassination attempt on Hitler that sadly failed.

I have to say, a gruesome, but honorable way to die.

Many photos. Many brief stories. Some graphic, so beware:

God Bless and Protect our Jewish Brothers and Sisters everywhere, and the Holy Land of Israel.

Very moving collection of images. Especially the portraits of infants and children.

God bless his chosen people and keep them from a repeat of history.

To keep in mind now more than ever – never again.

1. To repeat a previous comment of mine: I support Israel wrt whatever measures it deems necessary to protect its security.

Deniers and those who hurl this horror at people today are beyond vile.

Never again. We MUST stand for and with Israel, and against those who would relish repeating that black, horrific, evil event in the future (Iran and others come to mind).

Imagine, if you will, just one in every 50 erstwhile European Christians had stood up and said no to murdering Jews the Holocaust would never have occurred. Yet nearly 2 thousand years of Christianity in Europe never managed to instill more than the thinnest veneer of morality and decency upon its native populations. And that includes its clergy. Guess that’s what happens when one prays to a dead Jewish savior instead of a real God.

mackykam is a troll. Don’t feed the troll.

Don’t worry, mackykam, the spread of Islam in Europe will ensure that the Muslims do better. They will “instill more than the thinnest veneer of morality and decency upon its native populations.”

It’s been more than thirty years since I read the history of Nazi Germany which inspired the child I the. Was to say Never Again! Last new, a new tradition started to keep that promise alive: a collection of documentary videos showing the rise of the pagan Nazi era in Germany, the monsters who brought it about, the horror of the brutality and mass slaughter that resulted from it.

A new generation is coming and they must be educated. They must be raised to question why the atrocity of the Holocaust happened, why so many nations turned Jews away, why the countries of Europe gave up their Jewish citizens, why God our Father remained the Hidden God and let it happen and where He was in it all. In my family, that new generation will watch those videos and learn Never Again!

It is impossible not to watch these documentaries, see the rise of Hitler, see how many times he escaped death and not see the hand of Satan moving behind it, and not wonder why God let it happen. It is also impossible to watch them and not know that God was right there in the midst of it preserving a people to Himself.

Satan intended the Holocaust for evil. Why did the Jews have to be totally annihilated? Who was coming? Whose birth had to be prevented? What good was going to happen then that had to be halted? The Holocaust is, on a far grander scale, the slaughter of the innocents in Bethlehem which caused the voice to be heard in Ramah, Rachel weeping and lamenting for her children and would not be comforted because they were not.

God used it for good: the return of His people to their land; the revivification of His language; and the fulfillment of His prophecy.

The “dead Jewish savior”, as a baby, escaped one Holocaust that we well remember. Let us never forget the second. Never Again!