Hashtag Peace in Our Time

Hashtag Peace in Our Time

Um, is Hashtag Diplomacy really what we need now? 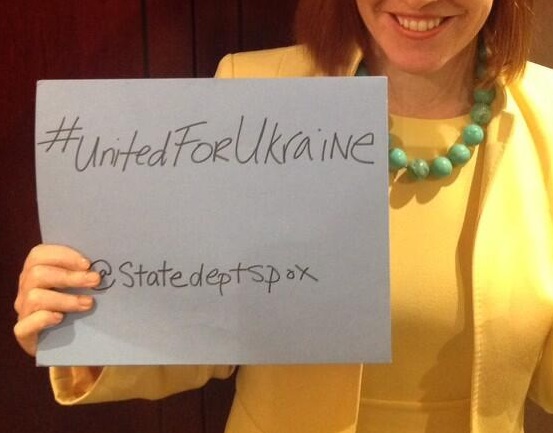 Welcome to the age of Hashtag Diplomacy.

For those unfamiliar with the concept, this is what it looks like: 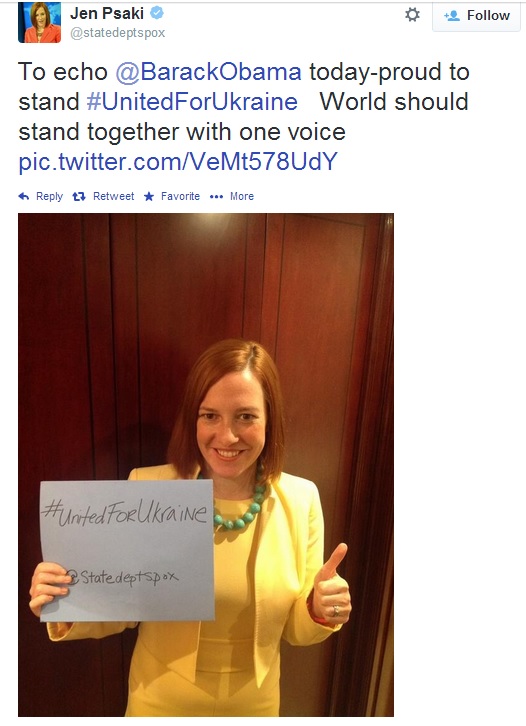 The above tweet is U.S. State Department Spokeswoman Jen Psaki giving a thumbs-up to Ukraine.

However, this Twitter campaign must not be a very formidable or convincing strategy, because it did not take long before the hashtag was “hijacked” by the Ministry of Foreign Affairs of the Russian Federation.

Below is just one example of the various MFA Russia taunts at the Obama Administration: 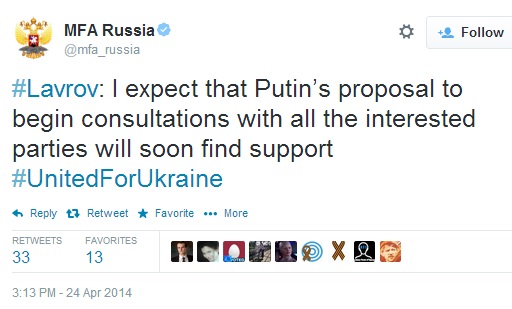 On Thursday,  Jen Psaki responded to the MFA by tweeting: 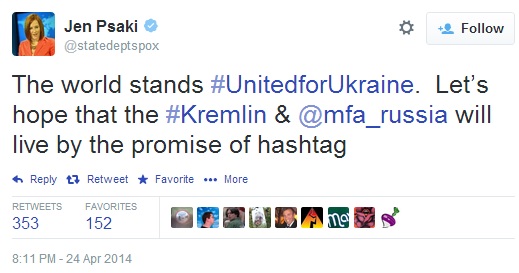 People were not impressed by this new “hashtag doctrine,” and instead took to social media to ridicule Psaki’s tweet.

At a press briefing on Friday, Psaki explained to Fox News correspondent Ed Henry, “I was highlighting the fact that they have not been following their hashtag with action.”

This Hashtag Diplomacy certainly ushers in a brave new world of social media.

obastard “Stands” for Ukraine? AYFKM? He just wants Ukraine to “Stand” still long enough to shove a shiv in their back.

All while watching a video and playing a round of golf. Long before Americans, or Congress, know the game plan.

Can this administration get any more embarrassing?

Put all the tweets ever sent together, it would not stop Hitler from invading Poland.

And, it won’t stop Putin from invading the Ukraine or Obama from looking like an ass.

I’m really surprised that Obama has sent the military into Cuba and then follow it up with a plebiscite, just like Putin did with the Crimea.

He could, in one foul swoop, ignore a deal with the Russians (made by JFK), take back a territory with historical US ties (back to the Spanish-American War), steal the Cuban vote from Republicans, regain his “manhood,” and finally bring the Gitmo prisoners into the US (actually take the US to them).

We are governed by idiots.

First, they are NOT idiots. They are smart people with an anti-American agenda. An idiot would win at blackjack occasionally, according to the law of averages. You don’t see that with the Obamabanana Republic.

They do not “govern”. They rule, run rough-shod, lie and break the laws.

That is not “governance” in any use of the term Americans recognize.

“Lord, if only I could have talked to Hitler, all of this might have been avoided.”

“Lord, if only I’d had Twitter to launch a massive hashtag campaign against Hitler, all of this might have been avoided.”

—attributed to LukeHandCool, imagining Borah brought back to life in the present day, introduced to Twitter, and sent back to 1939 in a time machine.

“Those State Department Spokeswomen who do not learn some of the silliest thoughts in history are doomed to tweet even sillier ones.”

This is awesome. The two generations of Americans immediately behind (younger than) mine/ours are largely idiots, sparsely sprinkled with a few members smart enough to operate independently of the idiots and of no threat to us whatsoever. My/our generation will remain the smartest for as long as we breathe. We can bring these chirruns to their knees merely by turning off the electricity for a couple days. They will collapse into sobbing heaps. We will rule them.

Well, if they don’t kill and eat you first…

the assumption among conservative thinkers has been for decades that the “young” would wake up to the fact that everything us Boomers are enjoying by way of government sugar is going to be paid for BY THEM, and that that is intolerable.

The NEW reality is that the “young” are not working…not earning…and they are getting used to the whole idea.

Cloward-Piven were pikers with a WAY too limited vision of how to destroy America as it existed PS (Pre. ScamWOW).

Yo, Jen! Wilma Flintstone called – she wants her beads back.

When I first saw Psakis, I thought she was some intern they made take the podium when Victoria Nuland was sick or something.

She’s like an undergrad, full of enthusiasm but lacking in skills. And she lies unabashedly, which may be why she was hired.

This is really embarrassing. Remember when Mets fans started showing up with bags over their heads? We’re getting there.

A hashtag is how we’re going to change the world?

What else can we expect from a redhead who wears bright yellow and accessorizes with turquoise? I suppose this is the Obama administration’s nod in the direction of Reverend King’s ‘color-blind society’.

She does look a bit like a canary wrestling with a grasshopper. But that’s not her big problem.

Ooow.State Department. How nice. Outsmarted and all, but nice.