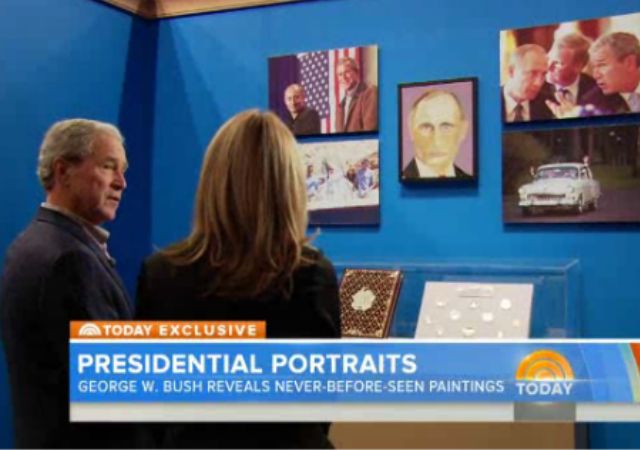 Former President George W. Bush will unveil a series of his paintings of world leaders in a public exhibit at his presidential library this weekend, and he seems excited to share a preview of his works.

As former President George W. Bush unveils his paintings for the first time publicly, he said he expects some of the world leaders who were his artistic subjects to be surprised at the quality.

“I think they’re going to be (like), ‘Wow, George Bush is a painter,”‘ Bush told NBC’s “Today” show in an interview set to air Friday. “I’m sure when they heard I was painting, (they said), ‘Wow, I look forward to seeing a stick figure he painted of me.'”

Among those he painted were former British Prime Minister Tony Blair, Russian President Vladimir Putin and the Dalai Lama.

More than two dozen never-before-seen portraits by Bush will go on public display Saturday at his presidential library in Dallas, in an exhibit entitled “The Art of Leadership: A President’s Personal Diplomacy.” The exhibit, which will also include photographs and artifacts, will explore Bush’s relationships with world leaders while in office.

The TODAY show aired a preview of some of the paintings today, and Bush had some interesting recollections to share about one of his painting subjects, Russian President Vladimir Putin.

When former president George W. Bush unveiled his paintings of world leaders during an interview with daughter Jenna Bush Hager on TODAY Friday, it brought back memories of an encounter with Vladimir Putin that revealed a lot about the character of the Russian president.

“As you know, our dear dog Barney, who had a special place in my heart — Putin dissed him and said, ‘You call it a dog?’’’ Bush told Hager.

He continued: “A year later, your mom and I go to visit and Vladimir says, ‘Would you like to meet my dog?’ Out bounds this huge hound, obviously much bigger than a Scottish terrier, and Putin looks at me and says, ‘Bigger, stronger and faster than Barney.’

“I just took it in. I didn’t react. I just said, ‘Wow. Anybody who thinks ‘my dog is bigger than your dog’ is an interesting character.’ And that painting kind of reflects that.”

Bush noted that he met with Putin numerous times during his presidency, but their relationship grew strained toward the end.

“I got to know him very well,’’ Bush said. “I had a good relationship throughout. It became more tense as time went on. Vladimir is a person who, in many ways, views the U.S. as an enemy. Although he wouldn’t say that, I felt he viewed the world as either U.S. benefits and Russia loses, or vice versa. I tried to, of course, dispel him of that notion.”

Bush spoke as well about painting other world leaders, like former British prime minister Tony Blair, and shared an emotional moment while discussing his painting of his own father, former president George H.W. Bush, saying, “I painted a gentle soul.”

He also shared his inspiration for taking on his hobby of painting.

“I was inspired partially by Winston Churchill, who wrote a great essay called ‘Painting as a Pastime,”’ Bush said. “I wanted to make sure the last chapters of my life are full, and painting, it turns out, would help occupy not only space, but kind of open my mind.”

You can view the full segment below.

Yeah, but will a picture be worth a thousand Bush-isms?

That popping sound you hear in the distance, is liberal heads exploding.

“Booosh is a monster, don’t try to make him seem human!”

George W. Bush’s portraits and style are quite good, but strangely, the portrait of his father is the least accurate and insightful of all the portraits. I hope he will do this one over.

The paintings of Putin and Blair were elegantly rendered and had a lot of psychological power.

What a refreshing moment to see and hear him in a personal manner again, noting the contrast between him and the thing we now have in his place.

Time does not heal all wounds .

It’s tough to judge a painting from a photograph. You really need to see them hung and lit correctly in a gallery or museum to render an informed opinion…. something the leftists who are bashing them have obviously forgotten.

Anybody who thinks ‘my dog is bigger than your dog’ is an interesting character.

Anybody who thinks ‘my dog is bigger than your dog’ is a moron.

Very nice, now please do us all a favor and tell brother Jeb not to run for POTUS, ever!

When Dubya said he’d looked into Putin’s soul, he wasn’t kidding. The portrait of Putin looms pretty much like Putin’s ex-wife’s assessment of him.