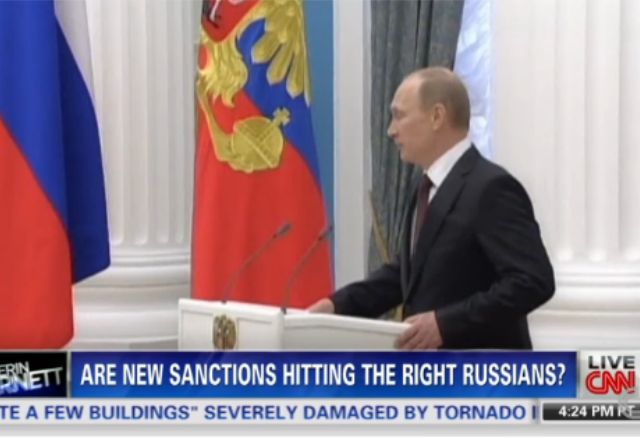 The European Union has announced a new round of sanctions that target 15 individuals with a travel ban and assets freeze as the situation in eastern Ukraine has continued to escalate.

The European Union has imposed sanctions related to the crisis in Ukraine on another 15 people, bringing the total number targeted to 48.

The EU said Monday they are responsible for actions that “undermine or threaten the territorial integrity, sovereignty and independence of Ukraine.”

EU foreign policy chief Catherine Ashton said she was alarmed by the worsening security situation in eastern Ukraine, and she called on Russia to take “concrete steps” in support of an international deal signed this month aimed at easing tensions.

She warned that if necessary, the European Union “will look at possible additional individual measures” related to the crisis.

The EU’s move comes just on the heels of an announcement from the United States regarding its own expansion of sanctions against Russia. The Department of Treasury indicated Monday it is imposing additional sanctions on “seven Russian government officials, including two members of President Putin’s inner circle, who will be subject to an asset freeze and a U.S. visa ban, and 17 companies linked to Putin’s inner circle, which will be subject to an asset freeze.”

The situation on the ground in eastern Ukraine meanwhile remains tense.

Pro-Russia activists stormed more buildings in the city of Luhansk on Tuesday, where a security headquarters building was overtaken several weeks ago.

They seized the regional government’s headquarters and prosecutor’s office before attacking the police station, reportedly with automatic rifles.

The US accused Russia of seeking to “change the security landscape” of Eastern and Central Europe.

The mayor of Kharkiv in eastern Ukraine was shot in the back on Monday, and was reportedly in critical condition after undergoing emergency surgery, according to CNN.

On Friday, eight military monitors with the Organization for Security and Cooperation in Europe were seized by separatists in eastern Ukraine.  One has since been released due to medical reasons, but the others remain detained, according to Reuters.

In response to the EU’s sanctions Tuesday, Russia had some sharp criticism.

The Russian Foreign Ministry responded on Tuesday that the Europeans were merely “going along with Washington” and had done nothing to pressure Kiev to negotiate with rebellious residents of Ukraine’s Russian-speaking southern and eastern provinces.

“Our partners are going along with Washington with newer and newer unfriendly gestures toward Russia,” the ministry said in a statement on the state-run news agency RIA Novosti. The statement said that the European measures revealed a “full misunderstanding of the domestic political situation” in Ukraine.

The European Union is Russia’s biggest trading partner, but it also depends on Russia for significant oil and gas supplies, making some of its member states, most significantly Germany, cautious about using its economic clout against Moscow.

The bloc has threatened tougher sanctions if the crisis in eastern Ukraine worsens. Measures directly targeting Russia’s energy and financial sectors are not yet under consideration.

And what. is more they cannot go to NBA games ever ever never..

That middle aged lady throwing out roses from the Luhansk window – her too.

She’s a rebel & she’ll never be any good ,
She’s a rebel & she never does what she should ,
Just because she doesn’t do what the EU / US says ,
She’s always good to me , always throws roses at me ,
She’s not a rebel , no no no , She’s aUkrainian citizen ,
Yes yes yes .

Kiev has lost The Dombass . All this time spent begging & posturing to Brussels Rome & DC , Yatsenuk could have personally gone with his own white rose & offered a solution .

Yes, yes, more individual sanctions, very nice. That’s 0.00237% of the Russian population now under sanctions. But were the EU sanctions sternly worded? They have no effect if not sternly worded.

Know what would have helped? A missile defense system in eastern Europe as a buffer against the Russians. Someplace like, oh, Poland maybe.

Poland needs more than missiles . It has 5-10 % of its poulation – all young – living in other Eu nations primarily Britain. So far they are still sending 50 billion back home but they are now buying up to settle & never going back. The Polish birth rate in both % & total is at its lowest ebbs , more than 40% down on Communist levels.

So sure , the US taxpayer paying to defend a people who won’t / can’t defend themselves because they have left.

And where are they going to get their energy, may I ask.

The USA. We’ve got plenty and can get more. It’s how allies are kept allies – mutually beneficial trade agreements. Simply giving allies money is bad, regardless of euphemistic ‘relief fund’ channels. The best way is to enter into business, trade, to mutual benefit of course, thereby exporting real value in one’s allied status with the US, reinforcing capitalism as a wealth producer, and keeping the world safe for democracy. Obama talks at allies, not with, and offers them a chance at foreign aid slavery with all sorts of strings attached, as is the progressive way. Factor in the constant lying on anything to anybody, and a mostly promises, promises foreign policy will suffer failure.

Need to expand the interweave of foreign trade – not effective subsidies – actual mutually beneficial, true trade. Puts power in one’s foreign policy, which is, after all, the expression and extention of power.

There are no export LNG ports in operation in the US . Onebeing built in Louisiana & one in Oregon approved. There is a backlog of LNG tanker s being built after slump in 2008 where numbers were halved. Most of the tankers 8/10 sites are in Asia & 2 in europe . I am not aware of any being built in the US .

What sort of time frame are you expecting them to wait? Currently they just turn on a nozzle practically anywhere & there is gas . There is a complex buying & selling network which can also be tweaked for Eu preferences should they get the upper hand. but first they have to throw the Russians out of that . But then they would have tothrow out the Oligarchs who run it in Britain for example. The Israeli gas fields are going to be in the runnng before the US .

America is a Johnny come Lately in this industry & other suppliers are not going to roll over .

Russia, of course. It might hurt Europe not to have the gas, but Russia could never afford to lose the customer – and no matter how quickly they turned it back on after a political cut-off, the EU would be looking for alternatives very diligently from the day of the cut-off.

Why do you think Ukraine has never been cut off, despite being over $3 billion in arrears?

The gas crosses their territory. They can’t really be cut off if you need to sell gas across their land. They can just tap in and take what they need off the top.

Russia’s fuel exports are mainly oil; only a small fraction is gas. And considering Stalingrad, the idea that a few Western sanctions can scare the Russian’s is absurd. They will go to the mat for what they want regardless of sanctions or even military strikes.

And besides gas, the Russian’s have many possible sanctions agains the West. Confiscation of Western investments in Russia, which are extensive in the oil and gas industry and access to the International Space Station were mentioned by Russian officials lately.

The main problem is Western aggression and obduracy. The US/EU/NATO refuse to even consider negotiations and will not respond to Russia’s suggestions. They refuse even to invite representatives of the insurgent east to the phony Geneva conference. Instead, they pretend that the oligarchs who constitute the anti-democratic and illegitimate junta represent all of Ukraine.

If the West does not climb down and enter into negotiations to resolve the crisis, there is a real chance of war in Europe by September. And the US/EU/NATO will have started it.

Poland missile defense is a joke… Russia has a plan for every genious idea put on this website. common American thinking Russians are stupid. Wake up ppl. Hurting Russia economy will hurt the world gas will be $8.75 a gallon will you send your kids to fight????? World war three would be serious.