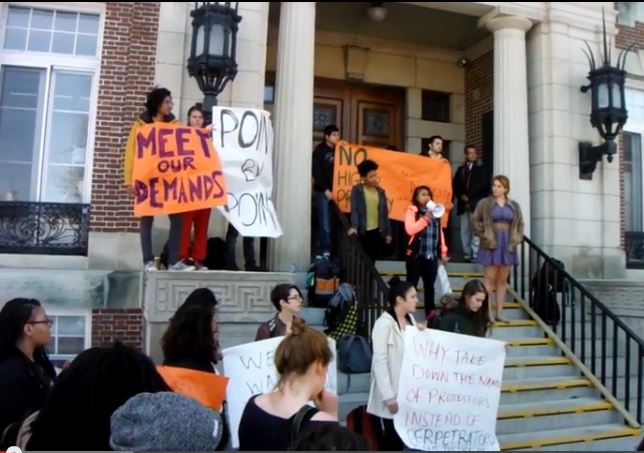 When I saw this segment on The O’Reilly Factor about student grievances at Dartmouth, I thought is was just more of the same.

@JasonMattera I guess you haven't been on a campus lately

Then I read the List (h/t The Other McCain).

Read it for yourself at the bottom of this post.

The students behind the list took over the President’s office to demand specific responses to each item on the list.

The takeover, and the list, have generated articles in The Wall Street Journal, The Dartmouth Review, and elsewhere. (As an aside, one of the grievances is to force The Review to stop using the name Dartmouth unless it stops using the term “Indian” in the publication.)

The list contains 72 (by the WSJ’s count) bulleted demands most which seek race-, sexuality- and ethnicity-based treatment of students, staff and faculty.

There actualy were a handful of grievances with which I agree, including this one:

Eradicate internal judicial processes for students that break laws, those crimes will be reported directly to police.

There was a lot missing from the list, like a focus on raising academic standards. But college increasingly is not about academics, anyway, it’s about “social justice” retribution and entitlement entrenchment.

But the one glaring demand missing from the list was this:

That “[students] live [on a campus] where they will not be judged by the color of their skin but by the content of their character.”

In fact, almost everything on the grievance list is designed to insure that that dream never comes true.

Whatever King’s actual intentions by 1968, my experience is that what is described as his vision of the Beloved Community and the end of capitalism and the primacy of the individual are all that will satisfy many people now. I have been at the programs and rollouts and been told what is “owed.” All in the name of King.

http://www.invisibleserfscollar.com/creating-kings-blessed-community-thru-federal-spending-a-curriculum-of-affect-and-no-rational-mind/ explains the vision. I wrote it after the phrase kept coming up at a so-called Collaborative Leadership Lab for a new future. It is also very much tied to the real implementation of the Common Core and other education reforms.

Part of what fuels the anger at places like Dartmouth is a belief that there must be cognitive justice first to get to economic and social justice. I wish I was kidding.

“The students behind this list” are toys. Where are the names of the adults that produced this nonsense? Those persons need to be fired.

The Dartmouth faculty instigator of the students is Russell Rickford, teacher of Marxist/radical/black power etc.

Good news for Dartmouth, bad news for Cornell: he joins the Cornell history dept in Fall 2014.

“Rumor has it that the [Dartmouth] History department in Carson Hall will be replacing Rickford with a piece of East German software that only runs under MS-DOS: Karl&Friedrich Pro Plus. You just type in the name of your issue, choose the length of the dialectical analysis that you need, and out comes the usual verbiage. No thinking required.”

I am stunned at the immaturity of these student clowns. Hope all their names are published online to assist reputable potential employers avoid them during the next 40 years.

I remember the old Doonesbury cartoons at the time, back when they were still funny, where the college president just surrendered and moved out of his office, showing the protestors where the good liquor and cigars were kept.

As sure as there’s a “D” in “Dartmouth,” there’s a radical professor behind this idea. Tenured, no doubt.

Administrators do these kids no favors by patronizing them and pretending they are in any way legitimate. They should be prosecuted for trespassing and put on probation for school, any other incidents and they’re OUT.

That is how the real world works. You don’t walk in, take over, and make demands. And the sooner these children learn that lesson, the better off they will be.

There are a series of professors, I believe, not merely one, who has used these young skulls full of mush to push their radical Alinsky Marxist agenda on the university – a “thought experiment” perhaps, a “test” of the “system” blah, blah, blah.

I wonder if this was actually a graded project they were “challenged” to take on in the Social Justice/Women’s Studies/Black Studies/People of Color and Minorities Studies/Queer & Gender Studies department(s) – or whatever they have at Dartmouth.

Personally, I would have had them all expelled.

When you go to a college, you sign an agreement – one part of which is that you will abide by the rules and not thwart the administration.

“I wonder if this was actually a graded project they were “challenged” to take on in the Social Justice/Women’s Studies/Black Studies/People of Color and Minorities Studies/Queer & Gender Studies department(s) – or whatever they have at Dartmouth.”

I believe the collective term for these academic pursuits is “Anger Studies”.

Every one of them should be shipped overnight to Pakistan with a change of cloths and a month of rupees.

In TWO months, they could come back.

Being practical, I have teenagers who will be going to college in a few years time. Where should they go to get a good quality education without getting diverted by this type of crap? Vassar is obviously off the list and now Dartmouth.

Personally, I’d love it if one of my kids/grandkids went to Hillsdale College in Hillsdale MI.

Back in the 90’s, I strongly suggested (perhaps ‘required’) my son to read The Way Things Ought To Be and See, I Told You So by Rush Limbaugh the summer before he entered university.

He read them both.

Shortly after he graduated, I asked him if those books had mattered. He enthusiastically replied that in fact they had, explaining that when he’d listen to leftist professors try to indoctrinate students or the students themselves cluelessly discuss issues with limited facts, he knew many of the facts/arguments on both sides so he wasn’t swayed the way so many students were.

He actually thanked me for asking him to read those two books!

(Rush, if you see this post, my sincerest thanks to you. Your books literally inoculated my son from the liberal sewage at his university.)

I submit that the key differentiator is not conservative outlook, it is federal money. If an institution accepts the latter, it cannot be upright in any way unless it is a federal military property, and even those are flagging under this criminal organization masquerading as a political party. I suspect every institution on the list first Leslie and now Henry link takes federal money. One possible exception would be the Franciscan institution. But I have no way to be certain.

Our host and his team maintain a fine reference of institutions NOT to attend, under the tag College Insurrection. Here is the start of a list of institutions TO consider attending/supporting because they do not accept federal money, and I would be most grateful to know of additions thereto, for example Jewish institutions: http://theological-geography.net/?p=4968

“Cissexism” is the belief and treatment of transgender and/or transsexual people as inferior to cissexual (non-trans) people.

Adolescents commonly make up new slang words as a way to feel superior to the kids still using the old slang. Tubular.

I looked up cisgender on wikipedia.

“Cisgender and cissexual (often abbreviated to simply cis) describe related types of gender identity where an individual’s experience of their own gender matches the sex they were assigned at birth.”

Does that me that if I like my dick, I can keep my dick?

Don’t be a dickist. Maybe your dick owns you, not the other way round. You’re probably a white male.

[T]he most remarkable aspect of the Freedom Budget was its failure. This is not to suggest that its ambitious proposals – which, if implemented would have completely re-imagined the priorities of federal spending – were likely to survive the policy-making process. Nevertheless, . . . it is surprising and revealing that the budget was entirely off of the radar by 1969.

There is no evidence that M. L. King worked on the budget or its concept at all, so these folks are welcome to invoke him if they wish, since the dumb thing was a monstrous failure (Thank God!).

Wow, what a list! Obviously, someone(s) spent a lot of time and effort creating this. If the creators of this list spent as much time and effort on their college courses, they would be at the top of their class.

Instead they spent so much time complaining and creating this list that they have no time to do any classwork.

Add item #73 to their demands; “Anyone who helped with writing this list automatically gets an A in all of their courses.”

See gad-coy just above. No “obviously” about it. Student’s did not write this, agents provocateurs did. Professional bellyachers. Students are a front, stupid cannon-fodder. Christ, have we learned nothing in fifty years about “campus demonstrations?”

people fear blacks and they know it

but when people dont say it, when its the 80000 lb gorillia in the room,

it has to be said

game over for them

this is the tip of the iceberg