Omar Arce was one of three co-sponsors of resolution seeking to force UCLA to divest from companies doing business with Israel. 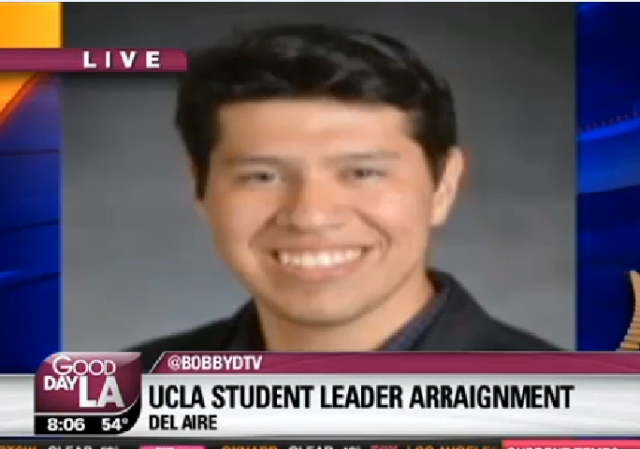 We previously covered the UCLA anti-Israel divestment resolution, which was voted down 7-7 by the student council after an intense and contentious all-night session.

One of the co-sponsors and a strong supporter of the resolution was Community Service Commissioner Omar Arce, as reported by The Daily Bruin (emphasis added):

Arce not only sponsored the resolution, he also endorsed a letter claiming “Islamophobic commentary” in opposition to the divestment resolution necessitated a “Diversity Requirement.”

The Daily Bruin reports that Arce has been arrested on charges of false imprisonment related to alleged sexual batteries:

An undergraduate student council member was arrested by university police Wednesday on a charge of false imprisonment.

On Wednesday, a female student reported a series of sexual batteries between October and March. The report led to 21-year-old Omar Arce’s arrest, according to a police report released Thursday afternoon.

The local Fox affiliate further reports on the arrest:

Undergraduate student government officer Omar Arce, who is facing sexual battery and other charges, was released on bond Sunday morning.

Arce was released from the Men’s Central Jail in downtown Los Angeles about 3 a.m. Sunday, according to the Los Angeles County Sheriff’s Department. He was being held on $50,000 bail.

He pleaded not guilty Friday to three counts of sexual battery, one count of battery and one count of false imprisonment. If he is convicted of all charges, he could face a maximum sentence of four and a half years in prison.

(Note – there have been conflicting reports as to whether Arce was charged with sexual battery or just false imprisonment.)

The feminists all tell me that wymyn NEVER lie about rape, sexual battery, false imprisonment, or the heteronormative patriarchy.

I believe them, mainly because they are some scary beaches.

So Omar needs to hanged, drawn, quartered, pilloried, and then turned over to the Sisterhood of the Vengeful Ovaries for punishment. And someone should notify his next of kin where to pick up his effects.

Sounds like that ritual straight out of the Handmaiden’s Tale.

Meh! NOW will embrace him from “men” on the Left.

You realize that if he weren’t a Muslim, he would be expelled from the university for this, almost regardless of whether or not he actually committed the crime. As noted by College Insurrection, males are apparently being thrown out of college on a routine basis any more on far less evidence than that required for a criminal arrest. And, if he were to be expelled, he could also potentially lose his seat on the student council.

I find it interesting that Islam trumps gender in terms of victim status, and, thus garners greater deference. We see this on a routine basis, when feminists refuse to condemn the much more egregious assaults on women found in the Muslim world than are found here, but, instead expend their efforts on the much more benign problems here. And, ditto for the homosexual lobby, which gives Muslims a pass for routinely executing homosexuals, but instead spends their efforts on getting the CEO of Mozilla fired.

The university won’t expel him because the diversity hounds out there don’t expect Muslim males to treat women with respect. Remember, the Koran tells the males: women are your fields; go in u to them an plough as you see fit.

So, he’s not a rapist; he’s just culturally, er, different, and diversity is tickety-boo.

“¿Qué debo pensar? What should I think? I’m torn!”

Next comes the civil lawsuit.

(Hey, did you misspell this useful idiot’s name? Isn’t it ‘Arse?’)

Just curious (and legally illiterate), but what’s the difference between a charge of false imprisonment and kidnapping?

You’re torn? Seriously, you all need to get a clue, and not just about poor little Omar.

For starters, you and your cohorts can check out the work of Francisco Gil-White. As it happens, he received his PhD in Biological and Cultural Anthropology from UCLA. He has written extensively on Israel and the “Palestinian” question. He’s also produced some fascinating videos available both in Spanish and English. Here’s a link to one:

He was Assistant Professor of Psychology at the University of Pennsylvania from 2001 to 2006 and lecturer at the Solomon Asch Centre for Study of Ethnopolitical Conflict… He holds a Masters Degree in Social Sciences from the University of Chicago and a PhD in Biological and Cultural Anthropology from UCLA.”