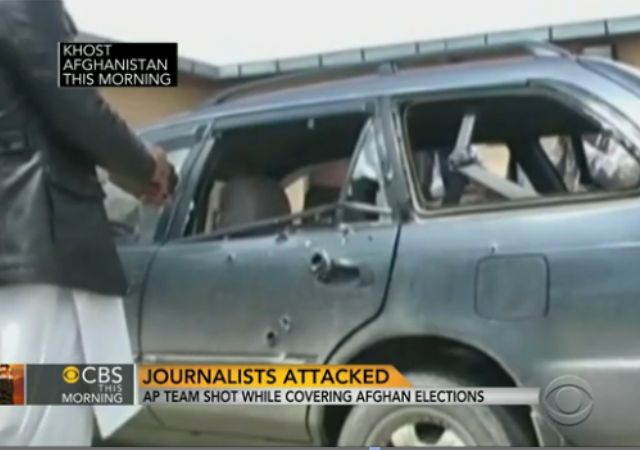 The Associated Press reports today that one of its photographers was killed and a reporter wounded in Afghanistan while covering news just ahead of nationwide elections there.

A veteran Associated Press photographer was killed and an AP reporter was wounded on Friday when an Afghan policeman opened fire while they were sitting in their car in eastern Afghanistan.

Anja Niedringhaus, 48, an internationally acclaimed German photographer, was killed instantly, according to an AP Television News freelancer who witnessed the shooting.

Kathy Gannon, an AP correspondent who for many years was the news organization’s Afghanistan bureau chief and currently is a special correspondent for the region, was shot twice and later underwent surgery. She was described as being in stable condition and talking to medical personnel.

“Anja and Kathy together have spent years in Afghanistan covering the conflict and the people there. Anja was a vibrant, dynamic journalist well-loved for her insightful photographs, her warm heart and joy for life. We are heartbroken at her loss,” said AP Executive Editor Kathleen Carroll, speaking in New York.

The attack came on the eve of nationwide elections in Afghanistan. The Taliban have vowed to disrupt Saturday’s vote for a new president and provincial councils.

The two were traveling Friday in a convoy of election workers delivering ballots from the center of Khost city to the outskirts, in Tani district. The convoy was protected by Afghan security forces. They were in their own car with a translator and the AP freelancer.

According to the freelancer, they had arrived in the heavily guarded district compound shortly before the incident.

As they were sitting in the car waiting for the convoy to move, a unit commander named Naqibullah walked up to the car, yelled “Allahu Akbar” — God is Great — and opened fire on them in the back seat with his AK-47, the freelancer said. He then surrendered to the other police and was arrested.

Additional coverage at CBS News in the video report below.

Bull. This is a bold faced lie told to idiot Americans by translators with an agenda.

The correct translation is – Our god is greater. Greater than what, you might ask.

Greater than the God of the Hebrews, of course. It is not terrorism – it is a spirit war being fought in the physical world with humans as either enlightened saints or ignorant dupes. Make no mistake – this war is real.

Only by killing enough of them to send the message that they will be wiped out if they don’t stand down is there any hope to end the conflict (which will NOT end the war – just quiet everything down).

The heart of man is dark until light comes into it. There is only one source of light – the Messiah crucified in place of mankind.

US Leadership lacks the will to win against and barbaric and determined enemy. It doesn’t help that they are sympathetic to their hate for America.

So then, we need new leadership.

The fountains of hate extend beyond even religion. Were they shot for being journalists, westerners, improperly attired women, unescorted women, just for being women, supportive of the wrong pols, etc.?

three strikes and you’re out.

This was just an honor killing; the dead person a woman. No big deal. Women have no right to be anything except baby maker and penis repository for muslim men. Afghani men love dancing boys and man-boy sex. There’s nothing wrong with that in their society. Women, however, are a threat to men will small penises who only want to pleasure themselves.

Why the fuss? Why should photographers or journalists be immune to getting killed in Afghanistan?

I don’t see articles on every military death in Afghanistan on LI .

Of course people take risks just being in war-torn zones.

These were Westerners killed not in some fire fight or shelling or even a bombing, they were targeted by a terrorist. The whole “Allahu Akbar” thing should be regarded as a strong clue.

So yes, it is both newsworthy and disturbing.

Are you saying the sexual orientation of the victims may have played a role in the shooting? That’s a hate crime in the United States and probably an absolute affirmative defense in some Muslim countries.

JackRussellTerrierist in reply to BannedbytheGuardian. | April 5, 2014 at 9:40 am

The cop who shot them was a stranger to these women and would not know if they were dykes or not. To him, they were westerners, of which NATO is a function. I believe the story explains that as the shooter’s motivation.

BannedbytheGuardian in reply to JackRussellTerrierist. | April 6, 2014 at 12:50 am

The earnestness and commitment of such people as this journalist who was killed is admirable. Perhaps they became too complacent. Traveling in a convoy to distribute election materials to Afghans who may have been opposed to the current authority may have been an invitation to just such an act.

I wonder why AP doesn’t lower itself to hiring a high-powered private security company to advise and protect their journalists in war-torn areas rife with murdering thugs such as Afghanistan.