Why did our intelligence fail to foresee Putin’s Ukraine moves?

Why did our intelligence fail to foresee Putin’s Ukraine moves? 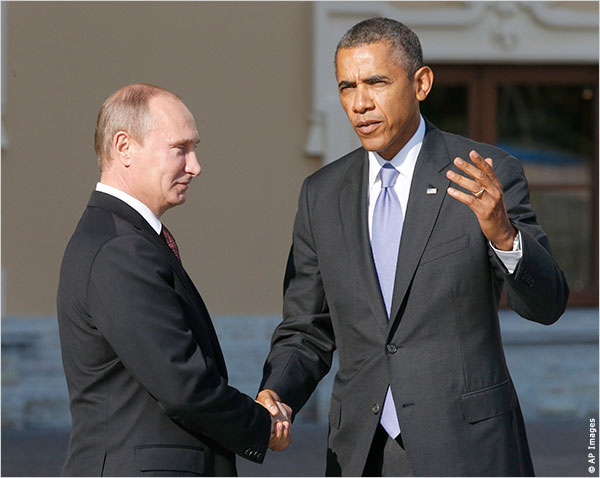 Why was our intelligence community caught so flat-footed about Putin’s intentions in Ukraine? That’s a question being asked on Capitol Hill, and in Politico.

One possible answer to the query is, “No, it wasn’t.” That one was given by James Clapper, Director of National Intelligence, and CIA spokesman Todd Ebitz, who both made statements to the effect that the US intelligence community “included warnings of possible scenarios for a Russian military intervention in Ukraine.” James Clapper has more than a bit of a general credibility problem regarding statements to the American public about intelligence, however. And a warning of a “possible scenario” does not include whether it was considered a distant possibility or a likely one.

The Politico article goes on to mention a bunch of liberal MSM pundits who failed to predict it. Is that some sort of surprise? The tone was set by our president and his entire administration and followed slavishly by most liberal journalists, who have spent a great deal of time and effort saying what a pussycat Putin is, and ridiculing as outdated (Obama to Romney: “the 1980s are calling to ask for their foreign policy back”) anyone who might assert otherwise. This began in 2008 with mockery of Sarah Palin, and reached a crescendo with Romney during the 2012 campaign.

To take any other scenario seriously would mean giving credence to those troglodytes Palin and Romney, agreeing with them instead of mocking them, and admitting that the world hadn’t turned into the fantasyland that suited Obama’s, Democrats’, and the MSM’s own rhetorical and political purposes.

2008 is calling, asking for the election back.

That’s very funny because 2000 got laryngitis from trying to scream into the hermetically sealed bubble that surrounds this website. Why not finish the sentence: “If it wasn’t for the Iraq War we could ……………” The 1st person who retorts that some democrats voted for it gets the knee-jerk prize; ’cause it wouldn’t have happened without Bush/Cheney.

What if it works out that Putin gets Crimea and takes 2 million votes with him? Then the rest of Ukraine eventually joins the EU and NATO? Would you take that deal?

Substitute Sudetenland and Czechoslovakia, and perhaps you would understand the situation.

Worthless cowards like you love to sell out others’ freedom for your convenience. Share your plan with a couple septuagenarian Ukrainian immigrants, they will beat some sense into your yellow tail.

Prize from the ir-rational Jerk. Seems appropriate. I especially appreciate the “some democrats” as though there were but a few. “Some democrats” would include just about every damn one. You do know that regime change in Iraq was the stated policy of the clintoon administration?

Cause Obama had too much Putin on him……or in him…..
or through him….

“…Putin on him…” made me picture Barry wearing Monica Lewinsky’s blue dress and heels. Yuck.

Now, Mr. Clapper, the question is did you inform the commander in chief and, if so, when.

The only people caught off guard were in the liberal echo chamber who were busy trying to convince themselves and everybody else that Obama was a foreign policy genius and the world was bowing before him.

The truth is that he is a pathetic joke abroad. He has no spine, makes weak statements, and won’t even back up his pathetically weak stances.

A lot of the world may not have liked Bush, but most of them feared him. They knew damn well that if Bush said, “Do X and I will make you regret it”, he would do EXACTLY that.

Look on the bright side.

Recall that O. was overheard telling the Russians during an “open mic moment” that he could be more “flexible” after the election. Well, after the election is now, and maybe he’s just honoring a promise. If so, that would be a first, wouldn’t it?

I wish people would stop saying that President Obama never honors his promises.

If you really matter, President Obama DOES honor his word!

Well, the NSA is way too busy snooping on Americans to bother with Putin.

It must be nice having a job where competence just doesn’t matter and you keep getting fat paychecks no matter how badly you perform.

It is likely that no warning would have made a bit of difference because it would have violated the artificial reality of the Obama world view.

From the old Doobie Bros. song:

What a fool believes,
he sees.

Irony alert. One of that band went on to become a govt dept security analyst .

I guess the intelligence community bought into the progressive drone mind-meld which said how stupid Palin was when she predicted this exact scenario, and how out-dated Romney’s thinking was when he named Russia as our top geopolitical foe.

So, this is YET ANOTHER example of why the prog drones are a bunch of blithering idiots who should be ignored, except when you’re ridiculing them. You’d think the ‘intelligence community’ would have been intelligent enough to know this already.

How do we know what intel knew or expected?

We can be sure Zero never paid attention to whatever they tried to tell him, anyhow.

Unless it was about the TEA Party.

Washington DC has become a town in which many people see the advancement of their own career as the highest value. It is never a good career move to attempt to tell an ideologue who believes he is the smartest man around what he does not want to hear. It is even a worse move to tell people you and your colleagues saw it coming after the ideologue’s bubble has burst but before he has left the arena for retirement.

Whether the world population expands or retracts, the reality is that land mass stays the same. No one should be surprised at the continuing reconfiguration of existing or “new” countries.

If our country were run by an “elite” of realists, they would understand that wars will always be with us, as well as energy resource conflicts, poverty, famine, drought and incurable diseases. Their thinking should allow for many possible scenarios.

And all these years after 9/11, the Ukrainian excursion by Russia shouldn’t have taken these “experts” by surprise. The world still pays attention to who’s the strong or weak horse.

Funny how Sarah Palin figured this out in 2008 when she said:

“After the Russian Army invaded the nation of Georgia, Senator Obama’s reaction was one of indecision and moral equivalence, the kind of response that would only encourage Russia’s Putin to invade Ukraine next.”

Because in the world of Chicago style politics it is far more profitable to know what opposition party candidates and elected officials are talking about on the phone or in e-mails or in private office conversations.

Once you have gathered enough information you can then either slip this information to your knee pad supporters in the press or use it to blackmail individuals. Either way, resources will be spent on those efforts that promise the most reward.

When you don’t go to national security meetings or you’re stoned during them, it’s kinda hard to strategize about possibilities abroad. It’s even harder when you only care about yourself and what the Tea Party may be doing to make you look like the weak, feckless moron that you are. (Sorry, average everyday morons. Don’t mean to speak ill of you.)

In this period of Austerity through which Obama has been leading us, there is only so much spying that the government can undertake. Logically, they must concentrate on the biggest threats.

The Russians cleverly avoided associations with TEA Party and other conservative groups threatening progressive hegemony over the U.S., and so managed to go undetected.

Obama started it by Leaning Forward and Putin bent him over the rest of the way.

After the Chechens were tamped down solid prior to Sochi. , some of the elite forces most likely moved in to replace those already stationed in the Crimea hence the non insignia disciplined elite forces swapped with the others who did the ‘everyday’ high security in all olympic games .

it is not that the West was caught off guard , they did not know their basic facts. too busy having gay tantrums to look at a map .

Further looking at that map , A Russian Crimea is a. bulwark againstTurkey moving into a weak Ukraine to consolidate with its German Turks .

This is like WW1 to me rather than Hitler when the west went bananas over grand duke Ferdinand whoever the f*ck he was. Tsar Nicholas & Kaiser Wilhelm were cousins . a recently published photo shows Wilhelm at about 4 at Balmoral Castle in a kilt of all things.

Intelligence reports are generally devoid of prediction. Separate assessments are made by analysts, but the difference is stark.

That’s off the top of my head and only up to 25 years ago. You would be better advised to throw CIA assessments in the trash directly without reading them.

Add the Egyptian Revolution, the Suez Canal crisis, and the assassination of Sadat to the list. Still not comprehensive.

IMO, the greatest failing here is believing that other peoples will react the same way we do based on our values. The idea of a reset button comes to mind. Americans could understand that. Can Russian’s understand the idea of starting over anew? I’d argue they don’t fundamentally understand such a thing. Treating other people the way you’d like to be treated is all well and good for Americans because we basically are all on the same page. But such thinking has no place in foreign policy. We can’t know how the Russian bear really thinks or be sure of its next move so the correct posture is to move cautiously and carry a big damned stick.

They do not use systems logic.
Alice-Sofia