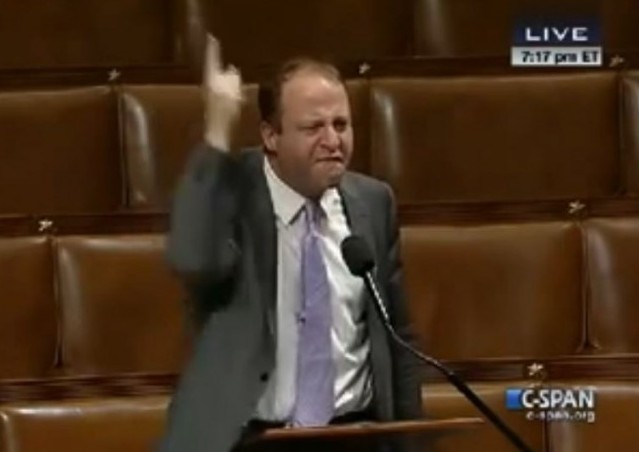 Even though some meaningful immigration changes could pass Congress, Democrats want full amnesty, and will settle for nothing else.  All other immigration reforms are held hostage to that demand.

Unable to move the Republican House on amnesty (yet), the Obama administration has been going it alone on immigration through unilateral non-enforcement measures.  But that targeted non-enforcement is not enough for Democrats.

It appears that the Executive Branch is going to disregard the Legislative Branch, via The NY Times:

President Obama said Thursday that deportations of illegal immigrants should be more humane, and to make that happen, he has ordered a review of his administration’s enforcement efforts.

Mr. Obama revealed the effort in an Oval Office meeting with Hispanic lawmakers on Thursday afternoon, telling them that he had “deep concern about the pain too many families feel from the separation that comes from our broken immigration system,” according to a White House statement.

Mr. Obama — who told the lawmakers that he had ordered Jeh C. Johnson, the secretary of Homeland Security, to conduct the evaluation — is under increasing pressure from Latino advocates to all but suspend aggressive efforts to deport illegal immigrants. Activists and Hispanic lawmakers say the government is ripping families apart by deporting people whose only crime was coming to the country illegally.

Schumer is overtly threatening that Obama will simply stop deporting at least those illegals who can be depended upon, if they eventually get amnesty, to vote Democratic.

Elections matter. The only political solution is impeachment, which cannot succeed so long as 34 Democratic Senators stay loyal to their First Black Vacation Hero.

Those who stayed home instead of voting for Romney are to blame for this. Had those voters turned out as they did in 2004, Obama would have been defeated. It was their vote and their right, but do not allow them to escape accountability for their “protests.”

And the sly dig “Unable to move the Republican House on amnesty (yet)” is embarrassing. We’ve already had TWO “Omigod Boehner is going to betray us with amnesty” scares in 2014, and the year is young, to go with the at least annual scares every year since he took the Speaker’s gavel.

At some point don’t you have to admit you are wrong?

Obama needed to be re-elected to see how bad things could get. We also needed him to be the one in charge when the economic situation “hits the fan.” The global economic situation is about to turn with the projected defaults in China increasing into 2014. I think we will know by the summer.

Obama is only a symptom. The disease is a coddled electorate that didn’t understand that elections have consequences.

You cannot lecture the electorate since they are self-centered and petulant. They need to learn through pain.

Had Obama been defeated in 2012, the electorate would have learned nothing. It would’ve been only a matter of time (probably only a few years!) before they again tried to elect a socialist.

I swear that the White House wants, desperately, to have the President impeached by the House.
The House already got fooled by the “banana in the tailpipe” with Bill Clinton’s impeachment, wants to avoid it, but they can have lots of fun putting Democrats in embarrassing situations that will pay off some 5, 10, 15 or 20 years from now.

If this crap continues, I think we should all expect we need to take some “irish action” soon.

If the Obamabanana Republic leaves the nation lawless and our borders unprotected, we are roaring up to the time when some citizen action will be mandated by reality.

Your feelings are widely held. Who will lead the band?

When the time to coalesce comes, I don’t know we’ll need a lot of leadership. It will just kind of happen.

Respectfully, we’re past that point and nothing good has happened.

Could we not equally say “the government is ripping families apart by [jailing] people whose only crime was [insert crime here]”? What makes flouting immigration law a principled exception?

Why can’t people get that the key word is ILLEGAL?

They’re not trying to make a principled exception; they are merely trying to sound palatable and persuasive. Big difference.

Most of them have probably committed some other crime besides entering the country illegally — such as forgery and identity theft, driving without a license or insurance, etc. And because they’re illegal aliens (and likely Democrat voters), the Democrats believe they shouldn’t really be punished for those crimes either.

I cannot see a moral argument for indulging people who invade our country and then demand that we change our laws to accommodate them, and demand language accommodation and various kinds of preferential treatment on top. And it baffles me that even some Republicans argue that those are exactly the kind of people we should welcome.

Estragon writes: The only political solution is impeachment.

What is it with you establishment rah-rah men that removed your creativity and wits at birth? Is somebody paying you to be so dim?

Both have some fault in this, but that doesn’t matter now, what matters is the GOP standing up to the Dems come next election and putting forward a candidate that the Tea-party will WANT to vote for. Not some one who just happens to be better than the Dems.

There’s no guarantee even a mid-term landslide will help; the election may not make any difference at all.

I wouldn’t be surprised if they try to pass an amnesty during the post-election session that shouldn’t be. The heck with the citizens and the nation, it’s all about getting richer; and plenty of them are willing to sell US out in exchange.

I’m not sure it’s corruption so much as being isolated from communities that are being overrun.

Of course, there are so many overrun now, you’d have to be blind not to see it.

Okay, it is corruption!

“GOP standing up to the Dems come next election.”

They’re not very good at “standing up” to the Dems. Maybe it’s because they’re not really that different than the Dems.

Maybe it’s because they’re not really that different than the Dems.

The “Establicans” are not any different at all – they both want the same thing, just for different reasons.

I was campaigning for Goldwater in 1964, what were you doing?

You snotty little punks like to throw around accusations and names, but never have any solutions. If you have something to suggest besides impeachment or a government shutdown, put it on the table.

You don’t of course.

I wasn’t campaigning for either; even then I didn’t care for the choices. I’m now of the opinion that the best choices run as far and as fast away from politics as possible.

As for impeachment, I don’t think charges brought by the Rs would ever bear fruit. I doubt charges would be drawn in the first place: there’s apparently a lot of dirty laundry that would be exposed at the mere suggestion. Until the Rs learn to play hardball without dropping their candy in the sand in the process, impeachment is just a pipe dream.

If the people ever come to their senses, or if the presses stop printing more money, maybe there’s hope for a change; but I’m not optimistic.

What I don’t understand is why even people my age pretend everything is fine, when they really should know better. I guess it’s just too easy to ignore what’s happening.

Obama will not be impeached. He’s black.

Hold the line.
Attrition.
An Attorney General that will enforce the damned law.
Build the dang fence.
….

Others here can come up with more, I am sure.

Keep in mind that we are “this” close to a second civil war in this country. If that comes to pass, then hang the bastards.

See, Etrogen? Its not hard to do what is right if one wants to do the right thing.

What we liberty lovers have learned since Reagan left office is that your GOPe does not want to do the right thing. Then you and them blame us for not taking part in our own destruction.

“Elections matter. The only political solution is impeachment”

As i recall you saying, impeachment is the only solution? And I did present a solution without pointing fingers if you would care to look at my previous comment. So please be a little nicer and more consistent with what you are saying.

If keeping families together is the goal, just repatriate the whole family. And yes, lets play with words and start calling it “repatriation” instead of deportation. Actually we could call it Global Repatriation And Affirmative Action Diversity Enhancement (GRAADE). Now who could be against that?

“Now who could be against that?”

Those for whom keeping families together isn’t the goal, it’s the pretext. Replacing the historical American people is the goal.

Thank you for the new word!!

Let’s repatriate all of them!

Considering how many of them retain primary allegiance to Mexico, they should be happy to be repatriated.

“Software substitution, whether it’s for drivers or waiters or nurses … it’s progressing. … Technology over time will reduce demand for jobs, particularly at the lower end of skill set. … 20 years from now, labor demand for lots of skill sets will be substantially lower. I don’t think people have that in their mental model.” — Bill Gates

… so why do we need “comprehensive immigration reform” ?

I’ve heard that 2/3rds of “deportations” are interdictions in the border area. (I believe Jeff Sessions cited that figure recently.) For the rest, the administration has been faithful to a very heavy focus on illegal immigrants who have committed non-immigration crimes on US soil. Given these facts, the activists’ arguments seem to be massively self-serving distortions. That is, either stop deporting hardened criminals, or stop interdicting illegal immigrants at the border, or both.

Deportations (at least deportations to Mexico) don’t seem to be that effective. One man who has already been deported ten times was apprehended again December 20th in Pinal County.

Perhaps the number of that man’s deportations is higher most, but according to my local paper it’s common for people who’ve been deported to keep coming back. Reading about some of their criminal records causes me to wince.

Apparently the powers that be are unable to recognize a systemic failure.