Tensions rise ahead of Crimea referendum

Tensions rise ahead of Crimea referendum 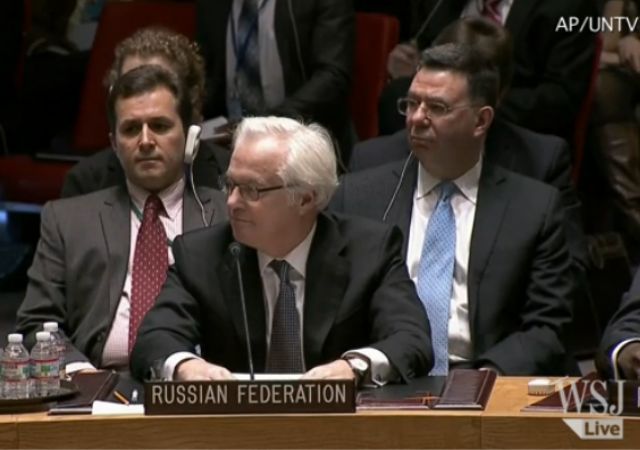 Tensions are mounting ahead of a planned referendum Sunday to determine whether or not Crimea will break from Ukraine and join Russia.

A few updates on the situation…

Ukraine accused Russia on Saturday of invading a region bordering Crimea and vowed to use “all necessary measures” to ward off an attack that came on the eve of the peninsula’s breakaway vote.

The dramatic escalation of the most serious East-West crisis since the Cold War set a tense stage for the referendum on Crimea’s secession from Ukraine in favour of Kremlin rule — a vote denounced by both the international community and Kiev.

The predominantly Russian-speaking Black Sea region of two million people was overrun by Kremlin-backed troops days after the February 22 fall in Kiev of a Moscow-backed regime and the rise of nationalist leaders who favour closer ties with the West.

President Vladimir Putin defended Moscow’s decision to flex its military muscle by arguing that ethnic Russians in Ukraine needed “protection” from violent ultranationalists who had been given free reign by the new Kiev administration.

But Russian Foreign Minister Sergei Lavrov had told Secretary of State John Kerry in London on Friday that Moscow “has no, and cannot have, any plans to invade the southeast region of Ukraine.”

The full statement from the Ministry of Foreign Affairs of Ukraine website demanded Russia withdraw forces from the territory of Ukraine immediately.

“Ministry of Foreign Affairs of Ukraine expresses its strong and categorical protest against the landing on March 15, 2014 near the village Strilkove, Kherson region of troops of the Russian Federation Armed Forces in a number of 80 military personnel, and seizure of the village Strilkove with the support of 4 helicopter gunships and 3 armored combat machines,” the statement read.

“Ukraine Foreign Ministry declares the military invasion by Russia and demands the Russian side to immediately withdraw its military forces from the territory of Ukraine.”

“Ukraine reserves the right to use all necessary measures to stop the military invasion by Russia.”

Supporters of the U.S.-sponsored resolution knew Russia would use its veto. But they put the resolution to a vote Saturday morning to show the strength of opposition to Moscow’s takeover of Crimea in the U.N. Security Council and got China to abstain rather than join Russia in casting a veto, which it did on three Western-backed resolutions on Syria.

The final vote on Saturday was 13 members in favor, China’s abstention, and Russia as a permanent council member using its veto.

“The resounding message from today’s vote is that Russia stands isolated in this council and in the international community,” Britain’s U.N. Ambassador Mark Lyall Grant told the council after the vote.

“Russia alone backs this referendum. Russia alone is prepared to violate international law, disregard the U.N. Charter and tear up its bilateral treaties,” he said. “This message will be heard well beyond the walls of this chamber.”

The New York Times explained Friday that there are Two Choices in Crimea Referendum, but Neither Is ‘No’.

Meanwhile, CNN reports that there were rival rallies in Ukraine’s eastern city of Donetsk and in Russia in Moscow on Saturday.

I don’t see Putin blinking until the wests follows through with tough sanctions. Even then I expect Russian troops will remain in Crimea for a long time. Blame this mess on Obama’s weakness.
First Obama canceled the planned missle defense systems in the Czech Republic and Poland, and failed to act on his many red lines. We also have Obama telling the Russian President prior to the election that once he’s reelected, he can do more for him.
Next we have Obama downsizing our military to before WW2 levels while the Russians and Chinese are building up their military.

The world now sees obama as a wimp that talks much but never backs up anything he says. He’s definitely in the process of downsizing America to what he always wanted. His own Banana republic.

America seems to be getting what it voted for.

Today Sec. of State Kerry announced the administration’s response to the Ukrainian situation. In a press conference Sec. Kerry stated: “In a show of our support for the sovereign state of Ukraine and its people in the face of pressure from Russian interference this administration has authorized the immediate release and shipment to Ukraine of 54,000 orange traffic cones to be used in disrupting and/or delaying any attempt of Russian troops to move into Ukrainian territory or to restrict the movement of any Russian troops that might already be in the country. Additionally, we will be shipping a considerable amount of used traffic barriers and portable barricades as soon as they can be found at the storage warehouses of the Federal Park Services. These will be used to help disrupt and delay any attempted potential take-over of Ukraine government facilities or critical infrastructure by Russian troops.”

When asked if the administration had considered another color traffic cones he replied: “Well we did consider red cones to indicate the importance of the situation, but we decided that someone might assume that is was essentially just a red line and they might either negotiate their way through them or just flat ignore them. Plus, based on the massive attention given to them recently in the media we determined orange cones were much more effective.”

i am sorry tosee ‘conservatives’ not putting the US army stranded in Afghanistan as even worth mentioning .

iIn july 2009 Russia signed the agreement tolet MILITARY. cargo & personnel transit its airspace to afghanistan . In the months prior to this the US had lost over 200 suply trucks being destryoed through Pakistan & also needing significant defending of said convoys . This agrement has hastened the emergency medical flights to the base in Germany , no doubt saving many l american lives.

Whilst it was /ispossible to go through Azerbaijan & Turkey ,these nei g nominal muslim nations , it was not ideal for it put these nations at risk of retaliation .

As Stephen Cohen , Russian Prof NYU asked at the time – what had the US provided to Russia that they would take on this extra AlQuaeda burden & the disapproval of a significant domestic disapproval re the extremely brittle matter of its own Afghanistan war.

if Russia were to.pull that agreement in retaliation for sanctions , then the US army would be trapped & need to evacuate quickly .

As an aside but not unrelated issue is the internal dynamics of some major muslim nations . What is being played out by Mh370 shows that the indian Ocean is not safe as it is clearly in the range of nationalist ( not alquaeda) hijackers . i am above average on Malaysia & the serial trials & imprisonment of Opposition leader Ibrahim. Bahrain is only being held down by Saudi troops .

Please America ,get those troops out .

Our foreign policy is inept. First we create power vacuums, then draw red lines, then fold.

I heard a rumor that the whole thing started when a Ukrainian special forces squad blew up a Russian radio station.

Well, that’s odd. Russian TV channels have been shut down across Ukraine and there is a good amount of censorship on the internet (comments and threads disappearing, videos disabled). It all makes sense if they are preparing to go to war, but what are they going to war with? Aside from irregular die-hards, Ukraine has no army.
Speaking of which, there were shootings at rallies in Donetsk and Kharkiv, by the way and a police-Pravy Sektor shoot-out in Kharkiv. Maybe they can blow up a radio station too.

The results are in, and Crimea “voted” to join Russia.

Anyone who thinks it was an honest vote OR that Russian-speaking citizens of Ukraine (including Crimea) would rather be in Putin’s authoritarian kleptocracy instead of the foundling democracy in Ukraine seeking closer ties to the West should contact me immediately.

I have some prime property on the Moon I can let go cheap.

i am not so sure you are right. I am one of the rare earthlings that has been to Abhkazia the Russia breakaway region on the other side of the Black Sea.

i was taken to a soccer match Abkhazia vs Gori. It was here that I saw the greatest concentration of enforcement personnel i had seen in any place i visited inthe USSR. Gori is of course Staln’s home town & the anger was still palpable.

Things don’t change in this part of the world quickly . i can accept that western Ukraine does not want to be part of Russia .yet you will never accept a majority Crimeans do .

The big issue is what will become of Eastern Ukraine .

Also just now Americans are in no position to sell lots of Moon realestate. You have no rockets .