Talk is cheap, releasing convicted terrorists just to talk is not

Talk is cheap, releasing convicted terrorists just to talk is not 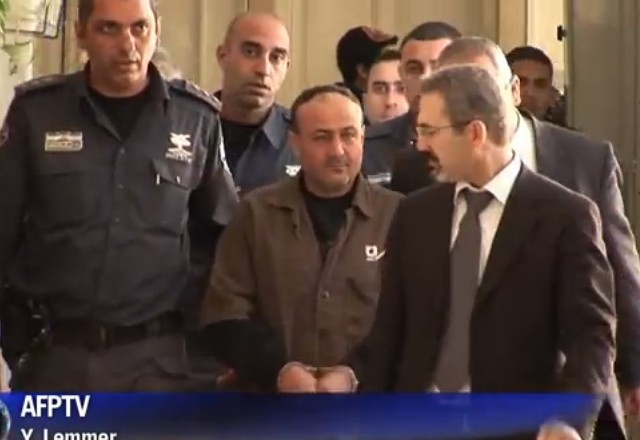 Israeli homes built on land captured in the 1967 war is the perennial go-to blame game for Palestinians’ hard line at negotiations.  But it’s just a negotiating ploy as to which Western leaders are all to eager to engage.

The other day, for example, David Weinberg wrote in Blame those Damn Settlements that removing the settlements would not alter threats to Israel or Muslim rejectionism of a Jewish national entity:

If it wasn’t for the settlements, you see, the Palestinians undoubtedly would recognize Israel’s right to exist as a Jewish state. Palestinian Authority President Mahmoud Abbas would formally forgo the so-called “right” of return for Palestinian refugees. Hamas and Fatah would bury the hatchet. U.S. Secretary of State John Kerry would win the Nobel Peace Prize, twice. And the boycott, divestment and sanctions movement would stop seeking to demonize and delegitimize Israel.

If it wasn’t for the settlements, the Iranian Supreme Leader Ayatollah Ali Khamenei and President Hassan Rouhani would announce an end to Iranian nuclear enrichment activities and the dismantlement of all related nuclear facilities. The Iranians would also stop shipping missiles to the Islamic Jihad and Hamas.

After his litany, Weinberg, of course, acknowledged that he was being facetious and observes, “Settlements are an issue for negotiation, a solvable matter of dispute.” It is easier to use settlements as an excuse for the lack of peace. Doing so, lets the Palestinians off the hook.  It assumes that Israel has a partner for peace.

When he met with Palestinian President Mahmoud Abbas earlier this week, that’s the approach that President Obama took. Obama said:

But as Adam Kredo noted, Abbas’s record is somewhat at odds with the description of him as “somebody who has consistently renounced violence.”

Abbas’s “renouncing” of violence may become even less credible. The AP is reporting (in an exclusive, no less)

According to several top officials, the Palestinians are seeking the freedom of Marwan Barghouti, who is serving multiple life sentences for his alleged role in killings of Israelis, as part of any plan to extend negotiations with Israel beyond an April deadline.

I could rewrite the headline “Freeing convicted murderer key to non-violence” to demonstrate how absurd this demand would be. (A guy who was convicted of five counts of murder is not an “alleged” killer.) Apparently, Abbas is convinced that the administration is so desperate not to have the talks collapse that it will pressure Israel to release Barghouti. The article adds that there are two other prisoners whom Abbas wants released as a reward for his negotiating, Ahmad Saadat and Fuad Shobaki.

Saadat was the ringleader of the cell that assassinated Israeli Tourism Minister Rehavam Zeevi. Shobaki provided the funds to purchase the Iranian arms found on the Karine A. Shobaki and Saadat had been in a Palestinian prison as part of an agreement signed in 2002. There were American and British observers who were monitoring the prison to ensure that the prisoners stayed in prison. But in March, 2006 the American and British governments charging that “the Palestinian Authority has consistently failed to comply with the core provision of the Jericho monitoring arrangement” withdrew the observers. Fearing that this was a prelude to the prisoners’ release, Israel sent in troops to take custody of the prisoners.

The fact that the Saadat and Shobaki are in Israeli custody, is evidence that the Palestinian Authority can’t be trusted to keep agreements. Furthermore, they, like Barghouti, were convicted of terrorism after the Oslo Accords, showing that they didn’t abide by that treaty. (It’s interesting too that the Palestinians would bring up Shobaki just two weeks after Israel intercepted the Klos-C, another ship bearing Iranian arms.)

Abbas decided to make all three men a cause. He wants them as a reward for negotiating for the state he supposedly wants. Why isn’t statehood its own reward? And if this state is to live peacefully in coexistence with Israel, why is Abbas demanding the release of terrorists whose actions violated the terms of the first agreement between Israel and the Palestinians? It may be true that Abbas, himself eschewed violence. But his celebration of murderers and his latest demand show that he condones terror committed by others.

I know that President Obama will say none of these things, but he should.

with listening devices and explosives built in.

Tell them to pound sand.

The Israelis need to refuse to consider ANYTHING else until Palestine publicly recognizes they have a right to exist as a state. Borders and settlements can be argued about later.

Until they recognize Israel as a state, any talk or negotiation is literally pointless.

Palestine is insisting that convicted murderers and terrorists be released just to come to the negotiating table, which I find – and I’m sure I’m not the only one – despicable.

However, Abbas’ desire to see these “men” free can be used against him; that door swings both ways. Part of me says Israel should line up every one of those murderers and terrorists on a gallows and start pulling levers until Abbas agrees to talk. If Abbas wants them freed so badly, he’ll negotiate to avoid capital punishment, and if he doesn’t, at least Israel won’t have to worry about them anymore.

Of course, my pragmatic side says this is a Very Bad Idea, as Israel will lose the moral high ground and be condemned by the international community (hah! like they don’t do that already!).

OF COURSE Abbas demands the release of more terrorist murderers as a precondition for talks. The only surprise is that he isn’t simultaneously demanding more Western aid as well.

After all, his demands for both have proven fruitful in the past, and he hasn’t had to negotiate seriously yet.

You can train feral cats to show up at certain times of day if you feed them then. But that doesn’t make them cuddly little kittens.

The ones that really want to be friendly will hang around after the food is gone. And not a Palestinian among them.

There is no Palestine. There are no Palestinians. Israel should stop talking to Islamic terrorists intent on her destruction. Stop meeting the terms of killers. How many times will the Israelis be taken in by releasing killers for more talks? After the first time, Israel was a fool to fall for it again. The record shows it’s useless, so just stop. When the Muslims come calling, yawn.

I had a bit of a laugh over Obama’s characterization of Abbas. I mean how many hours after Obama opened his trap did the Palestinians launch rockets into Israel? Against the fervent wishes of Abbas, no doubt [sarc].

Of course Obama’s shown himself to be such a dishonest fool, that nobody takes anything he says seriously. Even the Palestinian leadership look at him only as an opportunity to make small, short-term gains– releasing prisoners to raise their standing with the Palestinians, etc.

The problems come from Obama’s petty and cowardly habit of only talking tough to allies and conservative Americans. Russia, Iran, China, etc. have realized his amateur demeanor and have begun to act. Look for China to make a military play against Japan, the Philippines, South Korea, and Taiwan for various near-deserted and disputed islands… especially as China’s economy begins to drop sharply in the near-future.