Supporting Neil Young and others against anti-Israel boycotters

Supporting Neil Young and others against anti-Israel boycotters

Show social media support for celebrities, artists, musicians and others who visit Israel. 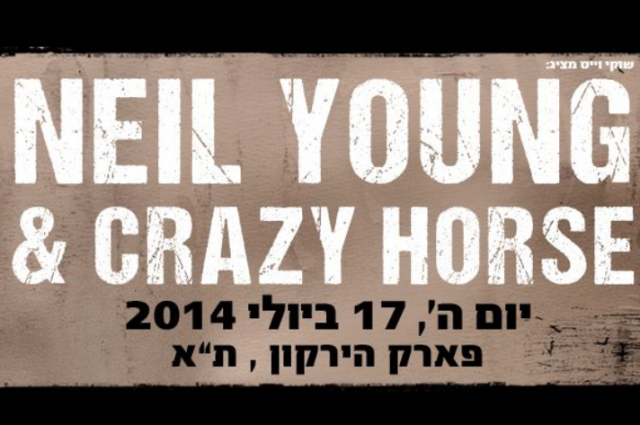 The anti-Israel Boycott, Divest and Sanction movement has been trying to intimidate celebrities, including musicians, into not visiting or playing in Israel. Through social media, the BDS crowd tries to create the impression of widespread support and to isolate the celebrities.

About six weeks ago, in the days leading up to the Super Bowl, I launched the “I support Scarlett Johansson against the haters” Facebook page.

At that point it was just myself and three friends inviting our friends and encouraging them to do the same, with the half-serious goal of getting 10,000 likes in about three and a half days. We exceeded our goal by 50% and today have steadily climbed toward 32,000. 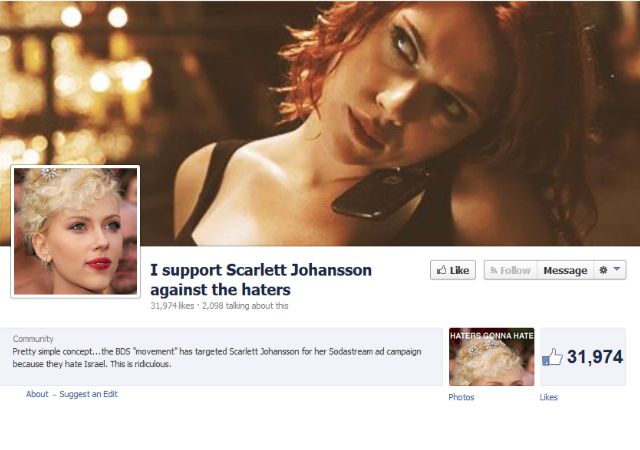 So when word started circulating that an anti-Israel, BDS hate group was preparing to pressure Neil Young into canceling his upcoming summer show in Tel Aviv with a petition of about 6,000 people…it was a piece of cake to call upon an already established base of people instead of having to start from scratch.

It took the BDS crowd almost two months to pull together 6,000 people; we blew past them in a week and are still growing, I support Neil Young against the haters. 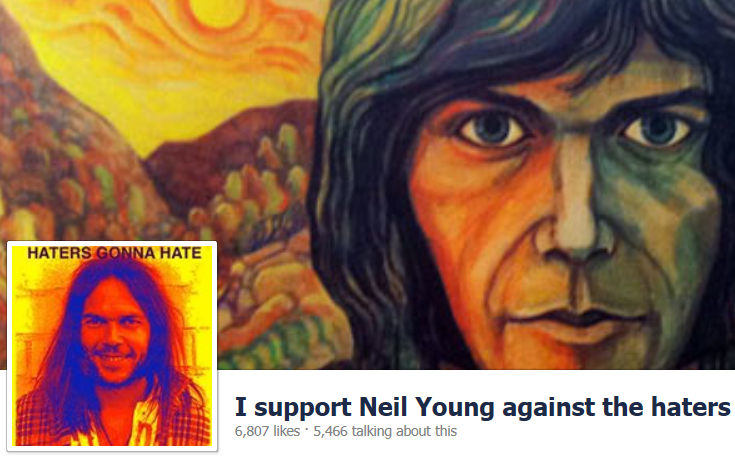 The key thing is that we did this with no budget, no advertising and no infrastructure of any kind, while the BDS movement (the ubiquitous “haters”) have an organization, a staff and allegedly an army of volunteers.

This may seem surprising, but it really shouldn’t be.

There is a reason why the big, bad “global movement for Boycott, Divestment and Sanctions against Israel” still only has 19,000 supporters on Facebook after being there for almost four years.

There is a reason why Israel’s tourism industry is booming – more people visited Israel last year than any other year – and why Facebook, Google and other big time companies keep buying up Israeli companies.

It’s because Israel actually has something to offer that goes beyond sloganeering and absurdly false representations.

You go to the BDS page and what do you see?

“Allah Akbar” – “Down with Israel” – and a lot of hidden or deleted comments. Who wants to be a part of that? I expected some nastiness on our Facebook pages, but was committed to let the comments play themselves out.

Outside of one guy saying he wanted to “boil Scarlett Johannson in oil” and the usual social media trolls (which have been really few and far between), it’s been a positive, fun experience. 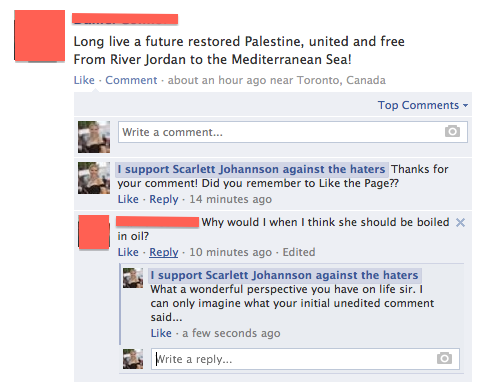 People send us pictures of themselves smiling and holding up tickets to Neil Young’s concert or giving us the thumbs up with their SodaStream machines and get thousands of people commenting, sharing and liking. The average BDS post gets a bunch of comments that range from outright Israel hate to weird conspiracy theories about Jews running banks.

I think that’s the real indicator of the success of these campaigns. It’s not about “likes” – anyone can buy likes or advertise for them. The real issue is how people participate. So in that regard, it’s not that surprising then that when you have a campaign that is based on tolerance, civility and inclusiveness, you’re going to attract tolerant, civil, inclusive and fun people who want to include their friends and do so.

When you have a campaign that’s based on anger, hatred and conspiracy theories, you end up with a lot of frowny faced Allah Akbars.

And who on Earth would want to attach themselves to something like that?

Aside from Roger Waters, that is…

[Liran Kapoano is the Director of the Center for Israel Engagement for the Jewish Federation of Northern New Jersey. He is also a professional marketer and (much to his chagrin) has become a first-hand expert on BDS/anti-Israel activity. He can be found @kapoano on Twitter.]

I’m pretty sure Neil Young doesn’t have nice things to say about me or my politics, so…we don’t need him around any how.

Leftists (including FB, of course) gotta cheat and play dirty to make it even appear they are winning. But they won’t win, for all the reasons you said, above.

OK–twist my arm. I’ve had relatively few good things to say about Mr. Young artistically, as I believe that he is among the most over-rated musicians of our time (really, now–don’t you agree that a guitar solo should include more than three notes, repeated endlessly?). However, I support him here…

Oh no, I like that song! Although I spit in the general direction of Mr Young’s politics I was about to suggest Down By The River as a future video-of-the-day but now you’ve headed me off at the pass… 🙂

Roger Waters a.k.a. Dark Side Of The Loon.

Luke: there’s just one thing left Master Yoda that I don’t understand, Roger Waters, why does he so hate the Jews?

Yoda: Too long, on the Dark Side of the Moon he has lived.
Once you start down it, the dark path, forever will it dominate your destiny, consume you it will.