Spinning the death penalty in Iran into a good news story

Spinning the death penalty in Iran into a good news story

According the New York Times one life saved in Iran is a trend. A spike in executions is just a statistic. 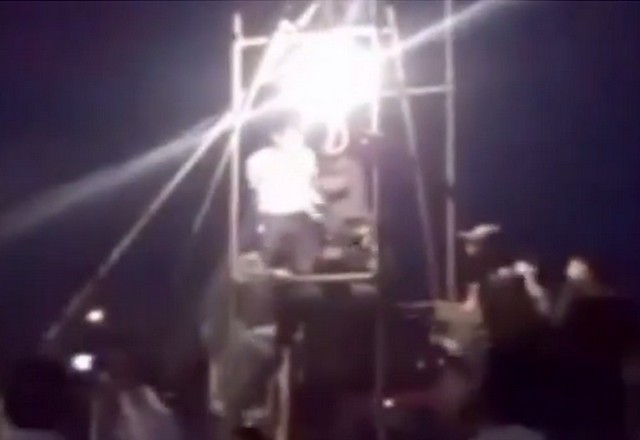 Sometimes you read a news story. There’s no one element that is necessarily false, but the whole story is so misleading, that it isn’t news, but propaganda. Or, to put it more bluntly, it is a lie.

If someone would read today’s front page story Mercy and Social Media Slow the Noose in Iran in the New York Times, without any other knowledge, that person might very well conclude that under President Hassan Rouhani, Iran’s brutal judiciary was softening.

The story focuses mostly on the case of a young man whose family was able to raise enough funds to pay “blood money” to the victim’s family. (This type of justice happens in Saudi Arabia too.)

Neither Iran’s judiciary nor the so-called blood money court likes volunteers intervening in the legal process, saying it could undermine the Islamic right of victims to avenge what has been done to them. The society’s permit was revoked under the former president, Mahmoud Ahmadinejad, but it was allowed to resume its work under the current president, Hassan Rouhani.

A week after the date was set for Mr. Anghouti’s hanging, the Rezai family, who declined to be interviewed for this article, finally relented and agreed to grant him a pardon in exchange for $50,000. That presented the problem of raising the money, since the Anghoutis are not a family of means. In the end, though, that proved to be the easy part. Within days, drawing in part on a campaign on Facebook — which is illegal in Iran but widely used with illegal software — the society raised 200 million tomans, about $13,000 more than was needed.

At some point the reporter, Thomas Erdbrink reports that “[t] United Nations estimates that Iran executed 500 to 625 convicts in 2013 …”

Reading the article, with no other information, one wouldn’t know the whole truth.

According to The Iran Human Rights Documentation Center (IHRDC), 165 convicts were executed in the first two months of 2014.  A rough estimate (multiplying by 6) yields a pace of 990 executions for the year. That is a much higher rate than last year’s rate of executions, even though part of the year, it was Mahmoud Ahmadinejad who was president.

It wouldn’t be fair to blame Ahmadinejad for 2013’s high execution rate. Again, according to IHRDC, 350 of the 624 executions last year were carried out after Rouhani was inaugurated. More than half of Iran’s executions last year occurred in the last five months of the year. (See the spreadsheet that is linked to here.)

Not only is Iran carrying out executions at a higher rate this year, but executions actually accelerated after Rouhani took power last year. The evidence shows that Rouhani is not the moderate advertised by the administration or much of the media.

The surge in executions should not be surprising on a couple of counts.

Rather than a moderate, Rouhani has always been part of the clerical establishment. In 1999, for example, he advocated the death penalty for demonstrators in 1999.

One of Rouhani’s crucial appointments was Mostafa Pour-Mohammadi, nicknamed “Minister of Murder,” as Justice Minister. Pour-Mohammadi earned that title for his role in thousands of summary executions perpetrated by the regime in the late 1980’s.

Additionally, it’s worth noting that in late January even the New York Times reported that Iran’s Surge in Executions Worries Rights Experts. That article noted, “… the more moderate tone adopted on human rights since President Hassan Rouhani’s election last year has yet to yield any moderation in the country’s punitive practices.” (This article appeared as a short “World Brief” item.

In this case, Erdbrink, the Tehran bureau chief, of the New York Times reported on one case, and suggests that it reflects a trend. This is misleading as deflects attention from what is actually going on. Twitter shows how a story like this works. I did a search on “noose” and “nytimes” on Twitter.

Below is a screenshot of a number of reactions. Other than Sohrab Ahmari’s sarcastic post, they all promote the narrow focus of Erdbrink’s article rather than the harsh reality of life (and death) in Iran. 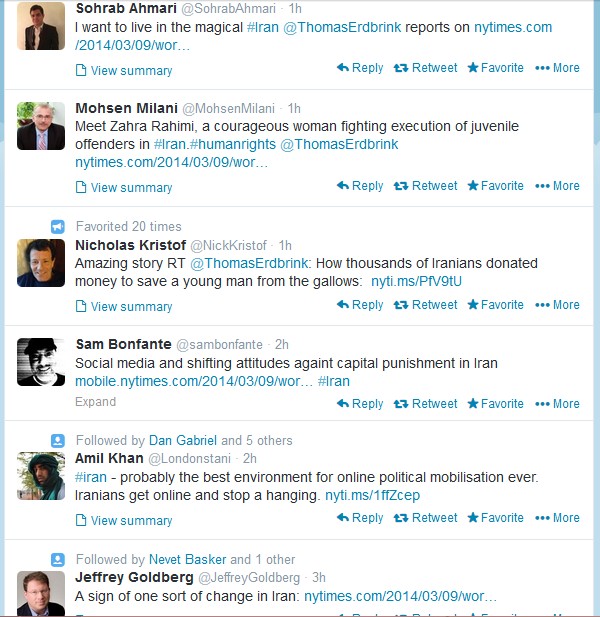 One wonders what percentage of the OFFICIAL executions are gays,victims of rape or insulters of the Pedophile Prophet. One also wonders how many UNOFFICIAL executions take place everyday.
Looks like they OFFICIALLY murder 2 to 3 people a day.

The Times has become a parody of a newspaper. Even in the overtly biased days of a century ago, publishers would have hesitated to take such blatant liberty with truth, understanding their ability to advance their political views depended upon retaining the credibility of the readers.

But the really good news is that very soon you will not only get to read misleading news in the NYT, you will also then be able to log onto Vox.com and find out why the false story is better than mere “raw” truth could ever be because you are too stupid to understand stuff with the deep insight of Ezra Klein and Matty Yglesias.

Because what the world really needs now, more than ever, is a couple of privileged white boys arrogantly telling it what to think.

It kinda sucks when events destroy their created reality (like an invasion of Ukraine), but it’s likely that the Left can run hype about Iran for many, many years. Unfortunately, very few Westerners and Americans care about what goes on within Iran. It’s dangerous to do so, but when does that stop people…