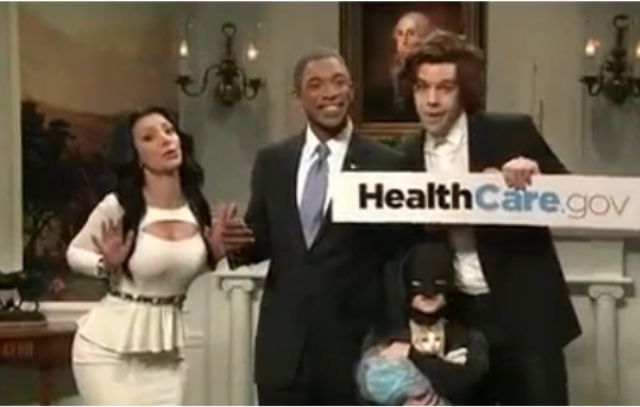 Last night’s Saturday Night Live opening poked fun at the latest series of social networking efforts to push young people to sign up for Obamacare, which have included an appearance from President Obama on Zach Galifianakis’ web series ‘Between Two Ferns’, among other things.

The SNL skit was complete with spoofs like a selfie for Twitter of Obama with Kim Kardashian, Harry Styles and Batkid holding a costumed cat, the president posing for an Instagram photo while wearing Pharrell’s hat and vaping an e-cig, dancing with the Pope for a Vine video, and kissing Justin Bieber (all of them played by actors, of course).

(I guess you could consider the skit served as its own promotion).

Are you sure this is actually a parody?

Just a good an ad as what ObumbumCare has already spent multiple millions of taxpayer dollars on – no?

Anyone else notice the shameless Snake-Oil Selling of ObamaCare by local TV affiliates? Would be so funny for some of them to lose their licenses. They’re funnier than SNL.