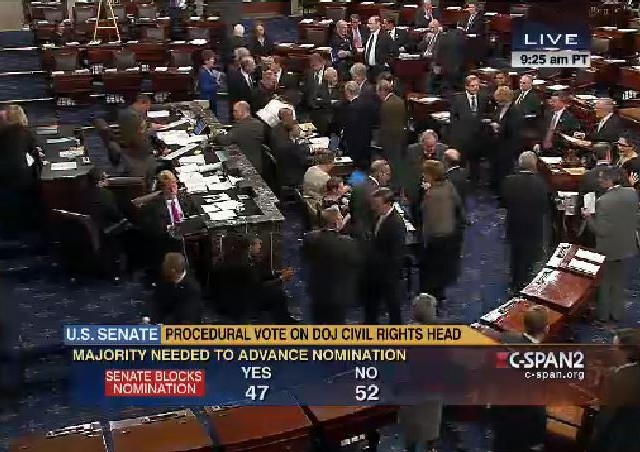 The U.S. Senate has rejected the nomination of Debo Patrick Adegbile, a former NAACP official who acted as lawyer for convicted cop killer Mumia Abu-Jamal, to become head of the Civil Rights Division of the Department of Justice.

Adegbile represented Abu-Jamal on appeal. The widow of officer Danny Faulkner along with police organizations and other groups, objected to the nomination, arguing among other things, that Adegbile became a champion of Abu-Jamal beyond being his appellate lawyer.

Mr. Adegbile previously led the Legal Defense Fund at the NAACP. In that position, Mr. Adegbile chose to throw the weight and resources of his organization behind Abu-Jamal. Attorneys working under Mr. Adegbile’s supervision have stood before rallies of Abu-Jamal supporters and openly professed that it was “an extreme honor” to represent the man who put a hollow based bullet into Officer Faulkner’s brain as he lay on the ground wounded, unarmed, and defenseless.

While Mr. Adegbile may be a well-qualified and competent litigator, through his words, his decisions, and his actions he has clearly and repeatedly demonstrated that he is not the best person to fill this position. Clearly there are others with similar qualifications that would be better choices.

The thought that Mr. Adegbile would be rewarded, in part, for the work he did for Officer Faulkner’s killer is revolting. Please set aside any partisan feelings you have and do the right thing when you vote on Mr. Adegbile’s confirmation. Please vote “no.”

In early February, Faulkner’s widow was interviewed about the nomination:

In a key procedural vote today, the nomination failed to advance, by a vote of 52-47 against, with 7 Democrats voting No:

Nomination of Adegbile fails to clear procedural hurdle. Needed 51. Vote was 47-52 with Reid voting no to recall the vote.

Here is Senator Ted Cruz’s speech against the nomination:

President Obama denounced the Senate defeat of a Justice Department nominee on Wednesday, calling it “a travesty based on wildly unfair character attacks against a good and qualified public servant.”

If Coons mustered the courage to vote against him, Obama should withdraw the nomination.

Coons is as big a candy-ass as Obama, he is dependably spineless and almost 100% in line with Obama and Reid in his voting.

But if anyone doubted the purpose of Harry Reid’s “nuclear option” was to enable Obama to get ever-more radical nominees past the Senate, take a look at Debo.

Wow. Didn’t think this had a chance.

“Debo Adegbile, goes down because of Democrat opposition.”

You might think we are roaring up on an election…or something.

Naaaw, that’s months away and shouldn’t be a factor here…

Is this final or is there still a chance that Obama will try to get him in…?

Sure he will; he’ll just announce that the Senate is not in session and appoint him.

{BTW, the one thumbs down is mine because I was trying to hit reply. And this system does not allow a toggle.)

Are “hollow based bullets” the next item in the Hardware Hysteria parade?

A brief moment of clarity in Washington? One can only hope…

It is an absolute disgrace that this contemptible individual was ever nominated for the position. I’m glad a least a few Democrats recognized this.

Hey, it’s Obama probably with input from Holder, why are you surprised?

I’m surprised that Rand Paul didn’t vote in favor of this man, after all, what was his justification for confirming Chuck Hagel and John Kerry?

My first instinct was that this is a good thing because maybe it shows that some Democrats are no longer willing to rubber stamp Obama’s agenda and they are finally taking back some of the constitutional authority they’ve ceded to him.

But I’m not so sure as I think about it some more. It could be that Reid can envision the campaign ads that would result if this guy were confirmed and he knew it would be a problem in November, so he gave the Democrats a green light to oppose the nomination. In other words, it’s politics – not necessarily that Democrats think he’s a lousy nominee or that they were doing what is right.

Plus, another benefit for Reid is that pundits can use this vote to show that nuking the filibuster actually makes individual Senators more accountable.

Obama loses a nomination, but Democrats probably suffer little or no damage and may even be able to spin it as a win as it relates to nuking the filibuster.

So, where’s the Republican denunciation of Democratic racism?

A furious Mr. Reid hinted that Republicans’ opposition was based on racism…
—WashTimes

And who could not have predicted that…???

-Why was Obama and Holder so hell bent on backing this guy?

-Take a 5 minute walk down the streets of Philly, and you’d know this nomination wasn’t going to fly

-What the hell was Harry Reed thinking forcing vulnerable Democrats to vote for this guy?

I can’t figure out why the senators up for reelection in red states didn’t vote against confirmation. If Reid knew he was going to lose, and how could he not, why would he not have those vulnerable senators vote nay? Those senators are going to get mauled on their yes votes, and they can’t even hide behind the fig leaf of paying their party dues.

The political ads on this just about write themselves.

exactly. Why didn’t more of the vulnerable red state Senators vote no? Hagan of North Carolina and Mary Landrieu of Louisiana for instance. Doesn’t make sense.

I’m just sitting back and enjoying the President in effect call out several of his party’s senators, including his former colleagues, as being unfairly biased against a good man who happens to be darkly skinned.

Reid is now pondering how to improve the nuclear option by allowing passage with only 47 votes.

Kay and Mary know there goose is cooked already and are aiming for an ambassadorship or some such?

According to NPR, they were all just a bunch of Dixiecrats from Delaware, Pennsylvania, North Dakota, West Virginia, Indiana and Montana.