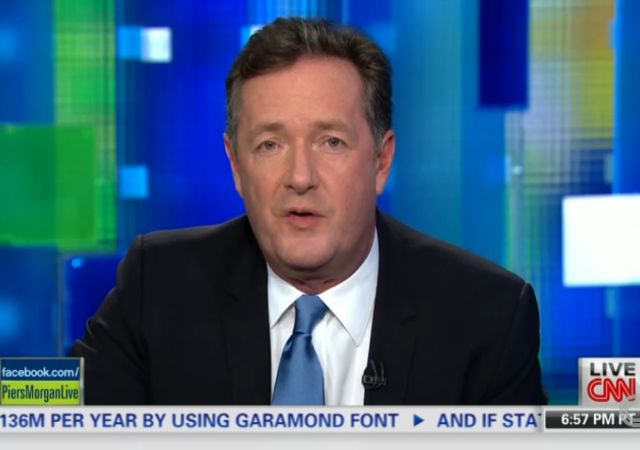 In the last few minutes of the final broadcast of his program at CNN Friday evening, Piers Morgan said goodbye to his viewing audience.

And he just couldn’t help himself.

Regular viewers will know that the issue of gun control has been a consistent and often very controversial part of this show. And I want to say something more about that before I bow out.

I have lived and worked in America for much of the past decade. It’s a magnificent country. A land of true opportunity that affords anyone, even British chancers like me, the opportunity to live the American dream. The vast majority of Americans I have met are decent, hard-working, thoroughly dependable people. As my brother, a British Army colonel, says, “You’d always want an American next to you in a trench when the going gets tough.”

But that’s where I think guns belong – on a military battlefield, in the hands of highly trained men and women fighting for democracy and freedom. Not in the hands of civilians. The scourge of gun violence is a disease that now infects every aspect of American life.  Each day, on average, 35 people in this country are murdered with guns, another 50 kill themselves with guns, and 200 more are shot but survive. That’s 100,000 people a year hit by gunfire in America.

Now, I assumed that after 70 people were shot in a movie theater, and then, just a few months later, 20 first-graders were murdered with an assault rifle in an elementary school, that the absurd gun laws in this country would change. But nothing has happened. The gun lobby in America, led by the NRA, has bullied this nation’s politicians into cowardly, supine silence. Even when 20 young children are blown away in their classrooms.

This is a shameful situation that frankly has made me very angry. So angry, in fact, that some people have criticized me for being too loud, opinionated, even rude when I have debated the issue of guns. But I make no apologies for that.

As Sir Winston Churchill said: “If you have an important point to make, don’t try to be subtle or clever. Use a pile driver. Hit the point once. Then come back and hit it again. Then, hit it a third time – a tremendous whack.”

My point is simple: more guns doesn’t mean less crime as the NRA repeatedly tries to tell you. It means more gun violence, more death, and more profits for the gun manufacturers. And to those who claim my gun control campaigning has been “anti-American,” well, the reverse is true. I’m so pro-American, I want more of you to stay alive.

But I’ve made my point. I’ve given it a tremendous whack. Now it’s down to you. It is your country; these are your gun laws. And the senseless slaughter will only end when enough Americans stand together and cry: Enough!

Please, Pierce, go away. Far away.Back to your beloved Britain whom we must defend at every turn. Back to Britain where soldiers crossing the street are run over by cars then hacked to death with machetes while a helpless sheeple look on and wail.
Your boorish lectures and smug self righteousness ran it’s time limit long ago, which is evidenced by the incredible poor ratings your show developed.
We simply stopped listening to you since you said nothing of value.

Could not have said it better! Thank you, Uh, for succinctly saying all that needs to be said about this loathsome person.

Maybe he needs to lecture the UK, where Sharia law is now being codified into common and statutory law, before he lectures us on our “broken” constitution.

Yes, Piers – go back to your beloved Britain, whose valiant and honorable soldiers you slimed with faked “atrocity” pictures that ultimately cost you your job.

Go back to your beloved Britain and stand trial for phone hacking, conspiracy, and lying to investigators.

Go back you beloved Britain and die in prison, you worthless leftist scum of the earth.

Awe, Piers…you sound just like the poor loser you are….

Buh-bye! Don’t let the door hit ya where the good Lord split ya….

Piers… watch that door when you leave, son. Don’t let it hit you in the ass.

…some people simply will not learn.

Sooo, lets see, his own country doesn’t want him back and he has entered a level of suck that will not even let him keep a show on CNN….So why should or would anyone actually listen to him?

CNN just didn’t want to be embarrassed when he is arrested and put on trial in the UK.

America’s gain will be Britain’s loss. CNN also once gave a show to Eliot Spitzer – what is wrong with that network?

Everything he says here is true. Why so much anger? More guns=more deaths. These are facts.

And NOBODY in history has been a more successful gun salesman than your Collective and its poor, sick leader, Pres. ScamWOW.

A free people won’t let elitists strip us of our ability to defend ourselves and our loved ones.

No matter how many lies you tell.

Even if it was true, it’s the difference between a free people and a people with freedom at the sufferance of the authorities.

“These are facts”. Really? Where did you get these “facts”? Evey unbiased study done on the subject has shown that the opposite is true. Check the FBI stats, or maybe the ones from the UN Office on Drugs and Crime. Since the UN wants to ban civilian firearm ownership it’s hard to call them “pro-gun” or “NRA stooges”. Their figures show two things clearly, although you have to dig through their report to find them … they didn’t want these numbers to “jump out” at anyone. Fact #1: The United States has the highest percentage of private gun ownership per 100,000 of population of any country in the world. Fact #2: The United States ranking for firearms murders per 100,000 of population places us at #28! That’s right, 27 other countries that have a lower (MUCH lower) rate of firearm ownership than we do have a higher (MUCH higher) rate of murder by firearm.

Not a part of the UN numbers, but readily available from the FBI are the numbers that show a drastic Decrease in firearm murders over the last three decades, while figures on gun sales have skyrocketed over the same period. The FBI crime stats also show a significant drop in violent crimes against civilians (not to be confused with Bad Guys shooting each other) in every state where Concealed Carry has been legalized.

Finally, the anti-gun folks try hard to suppress this data: each year an estimated 2,000,000 crimes are stopped by armed civilians, the vast majority without a shot being fired. Once the Bad Guys discover their target is armed, they reasonably decide to find someone else to be their victim! These stories don’t usually make the news because they are not considered newsworthy, like saying “There was no fire in the home at 1407 Poplar yesterday.” Things that DON’T happen rarely make the news.

In the years of Tyrant Obama the Liar’s reign fear of his tyranny has spurred the citizens to buy more guns. As the number of guns we own has increased the murder rate with guns has fallen and so has the crime rate. This proves that more guns doesn’t equal more gun violence.

I played the video and I believe that’s the first time I’ve ever listened to Piers Morgan; it will also be the last. I find no need to listen to someone who won’t allow facts to get in the way of his warped opinion.

I wonder if he has no concept of enslavement, or if he thinks it only applies to people of lesser status. I wonder what he’d do if he came under physical assault with no one else present to protect him. He apparently doesn’t recognize that we spend every day of our lives in trenches. We live in battlefields because our rights have been stolen and criminals feel free to take advantage of a disarmed public.

I’m sure Piers Morgan considers himself a humanitarian, even while refusing to recognize the human right so basic that our founders felt it vital to guarantee it not be infringed.

I’d tell you to go back where you came from, Piers, but I like Britain too much to burden them with the likes of you. So, go to North Korea. No guns in civilian hands there. You’ll love it!

Keep in mind that most Brits would own guns if their draconian laws were changed. Let’s not automatically denigrate Britain by coincidental association with the execrable Piers Morgan.

Piers, don’t let the door give you brain damage on the way out.

Who is this “Piers” person? Is he related to Sir Oswald perhaps?

The French aristocracy despised their poor. When the Revolution came neck chopping helped to even things out. English yeomen were required to spend Sunday afternoons practicing with the long bow. The British had the good sense to treat their commoners with a little bit more respect. That and the Wesley brothers helped stop the French Revolution at the Channel. Now home break ins in Britain happen about 50% of the time when the home owner is at home, and helplessly unarmed. No thanks.

Wow. Not a single word about what was responsible for killing those people in the movie theater and the elementary school.
.
.
.
.
.
.
.
.
.

Great! Honor Piers’ departure with a day at the range.

Poor Piers. He’s simply too stupid to understand the issue. So he doubles down on arrogance.

libs are to dumb to understand the concept of firearms for self defense. …or they intentionally want people disarmed so that they can force their agenda on them

after you read pier’s morgan comments…

(someone needs to send that video above to Piers Morgan – want him to see the results of the liberal ideology firsthand)
it literally destroys any arguement liberals have for gun registration and gun control laws …when the loophole is that politicians can easily broker a deal and obtain M-60’s/rocket launchers/AK-47’s and arm criminals (of any kind) from murderers for hire, to the chinese triad, and jihadists, or even criminals intent on school shootings.
all… for campaign donations. …now there’s no possible way gun registration would even help prevent this – nor would gun laws.

ironically… Vee was prohibiting guns to law abiding citizen’s. …while allowing the criminals to obtain these weapons.

I believe the proper english term for a Gentleman of Pierces’ caliber is “Daft Twit”.