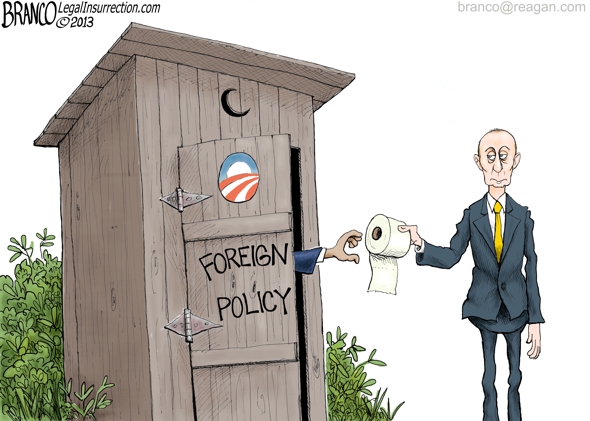 On what key issues does Putin need Obama?

Yeah, now Vlad is threatening to leave the relationship and take all the prized possessions with him.

Via AP, Russia warns West it may change its stance on Iran:

Russia may revise its stance in the Iranian nuclear talks amid tensions with the West over Ukraine, a senior diplomat warned Wednesday.

Russia’s Deputy Foreign Minister Sergei Ryabkov said, according to the Interfax news agency, that Russia didn’t want to use the Iranian nuclear talks to “raise the stakes,” but may have to do so in response to the actions by the United States and the European Union.

The statement is the most serious threat of retaliation by Moscow after the U.S. and the EU announced sanctions against Russia over its annexation of Ukraine’s Crimea region.

Ryabkov, who is Russia’s envoy to the Iranian talks, said that Russia considers the “reunification” with Crimea as far more important than the developments surrounding the Iranian nuclear program.

So does this photoshop that made the rounds:

Not being George Bush is not a foreign policy.

Are you suggesting that foreign policy is not about being ‘liked?’

Maybe being ‘respected’, even ‘feared’ just a little bit, is more important?

Ewww, viewing that PhotoShop was not a good idea.
I want to scratch that image from my memory….

Look closely and you’ll see that Obama’s left hand is in Vladdie’s pants.

That’s when Vladdie bumps the gait up a notch.

Brokeback Mountain all the way around and Vlad’s the one on top.

Obama cannot do anything against Russia whilst they control the transit of personnel & supplies to Afghanistan.. If The US did not desperately need Russian co operation , then they would not have gone begging.

Yes, you keep mentioning this, and this is definitely something Americans need to talk more about.

That is because I had travelled to Dushanbe to see what I could of the Soviet effort & get some local Tadjhik feedback. it never leaves you .

Like I said at the beginning, every time Obama calls up Putin, Putin hangs up the phone one step closer to taking Ukraine and others…even if he really doesn’t want to-

…just to stick it to #Captainkickass/#Gutsycall

What epic fail! Putin is emboldened to swat our gnat of a president, just as a schoolyard bully will keep picking on a wuss. Even our media … oh, wait … it’s just crickets I hear. Never mind.