Roberts was first elected to the  House in 1980 and the Senate in 1996.  As it has been revealed that Roberts did not even have a permanent residence in Kansas, and as it sinks in that Roberts has been around D.C. foreever, Roberts’ negatives have risen.

While Roberts has a large lead, he is vulnerable:

Sen. Pat Roberts’ (R-Kan.) net approval rating has dropped 12 points in the last year, and he could face an increasingly competitive primary race for reelection, a new poll suggests.

The PPP poll indicates Roberts has a 49 percent to 23 percent lead over Wolf for the primary, but the pollsters say the lack of name recognition for Wolf could explain the wide margin.

For a generic “more conservative” opponent in the primary, Roberts would only lead that person 43 percent to 39 percent.

And he knows it.  Roberts’ oppo research dug up a long-ago deleted Facebook post by Wolf about x-rays of gun shot victims, for which Wolf has apologized.  If that’s the best Roberts has to justify another 6 years in D.C., it may not be enough.

Roberts has a lot more money, and the backing of those in power who want to crush primary challengers who undoubtedly will throw more money into the race.

Wolf is having a money bomb today. This may be the best chance to unseat a Republican establishment incumbent in a primary.  It’s a reason to get excited again. 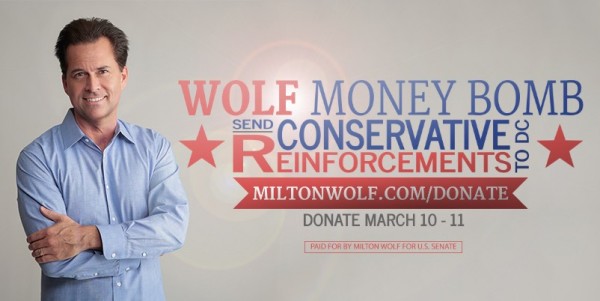 I had a chance to meet Dr. Wolf for the first time at Blog Bash last week. Other than this horrible photo of me, it was great to meet him:

Because you asked, Professor, I donated.

That is my analysis as well. Some California dollars are on their way to Wolf.

And from New Jersey as well.

I have nothing to give but I will push info from my site to try to help.

Pat Roberts has been nothing but a loyal conservative since first elected. If he’s not conservative enough to suit you, maybe the problem is YOU and not him.

If the lunatic fringe doesn’t support even lifelong conservative Republicans, may I humbly suggest the GOP may not be the party for you.

There is already a party that considers our leadership traitors and will do anything to defeat our incumbents. It’s called “the Democratic Party.” Their doors are always open to anyone who hates Republicans.

Or you could start your own brand-spanking-new party. Then you could spend your time and money developing an infrastructure and qualifying for ballots. Maybe get some fresh air.

his voters don’t like him, he doesn’t live there, and you call the professor lunatic fringe?
hell I’d ban you if it were my site.

Estragon – this country desperately needs conservative men/women with the fire in their belly. Upon first time election, Dems immediately become a part of the D.C. machine, whereas it is my observation that for a Repub it takes typically one to two terms. This defeats the ideas supposedly endorsed by conservatives/Republicans. The only way for the conservatives to actually win is to refresh the Republican candidates regularly (and yes I am for term limits all around). Why do we re-elect the same person all the time? I am convinced that a big reason is because that person can climb higher on the congressional food chain and bring home more pork to his/her State. If you believe in our Constitution and our Founders’ beliefs, this is antithetical to those beliefs. Robertson is not a “bad” Republican, but he is definitely a part of the D.C. machine. That machine is steamrolling you, me and the entire country. It is time for a big change.

I just went to http://www.ontheissues.org/senate/pat_roberts.htm and don’t particularly see why the need to primary him. Now – as a Libertarian I disagree on a lot of his positions but he seems to be a consistent vote against big government. Is the synopsis of his positions incorrect at ontheissues?

I’m not saying this because I back Pat Roberts only that perhaps there may be better places to put ones efforts such as getting rid of McConnell. Now the flip-side to that is — I just checked McConnell on ontheissues and wouldn’t have thought that he was all bad either. So it goes to show you that site is only so good.