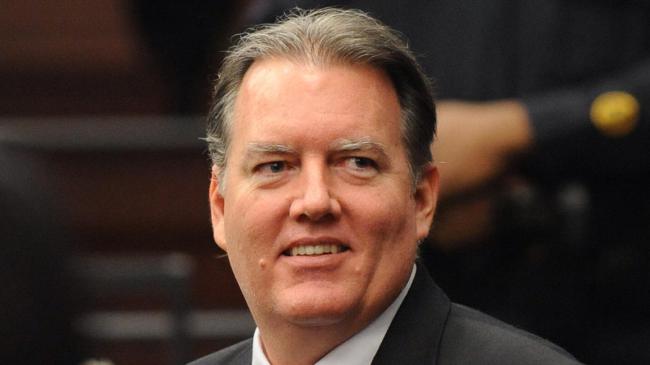 Micheal Dunn’s attorney, Corey Strolla, has asked that his client’s sentencing hearing be delayed until — and, at this point, still a likely but speculative if — Dunn is retried on the murder charges on which the jury hung during his first trial last month.  (This report is sourced at the Associated Press.)

Angela Corey, the Florida State Prosecutor who led Dunn’s prosecution, has stated that she is determined to re-try Dunn on the hung murder charge.

Dunn’s attorney Strolla argues that statements that Dunn might make during his sentencing hearing could be used against him at his re-trial.

It is common for a convicted defendant facing sentencing to concede his offenses in an effort to demonstrate remorse and thereby receive a lesser sentence.

Dunn faces a potential of 60 years in prison on the three attempted murder charges (with firearm enhancements under Florida’s “10-20-Life” statute) and an additional 15 years for having fired into an occupied vehicle, the four charges on which he was convicted. In theory, at least, the sentencing judge has the discretion to sentence Dunn concurrently, such that the sentences would run simultaneously, rather than consecutively, in which each would run after the other. If run concurrently Dunn could serve as little as 20 years in prison, rather than the 75 years he would serve if the sentences are run consecutively.

(We have previously covered this issue of Florida sentencing law here:  Marissa Alexander May See Sentence Triple to 60 Years.)

Separately, Strolla has also informed the court that he will no longer be representing Dunn, and requested that the court appoint Dunn a public defender. It is common knowledge that Dunn has been unable to pay Strolla’s legal fees for a considerable period of time.

There is a valid point here, it’s an unusual situation.

The sensible solution would be for the judge to appoint Stolla and have the state pay him while he and Cory negotiate a sentence. Dunn deserves to serve a long time, but he’s not some master criminal.

Unfortunately, Corey is more about getting the maximum when she can, and she needs it now after the Zimmerman debacle. So Dunn is probably just at her mercy.

“It is common for a convicted defendant facing sentencing to concede his offenses in an effort to demonstrate remorse and thereby receive a lesser sentence.”

But is it common for a defendant to be sentenced for one part of a crime while still being re-prosecuted for a second part of the same crime? It certainly seems like Corey is trying to cross another ethical line here.

I’m not sure but I would think that the sentencing would normally be scheduled by the judge based on whatever the normal parameters are. It would seem that Corey wouldn’t generally have anything to do with the timing unless the judge had already changed or postponed it or after a motion to have it changed or postponed had been submitted. Perhaps then she could put her position to the court. Just guessing here. Perhaps someone more familiar with the normal procedures might chime in. The article did not mention Corey.