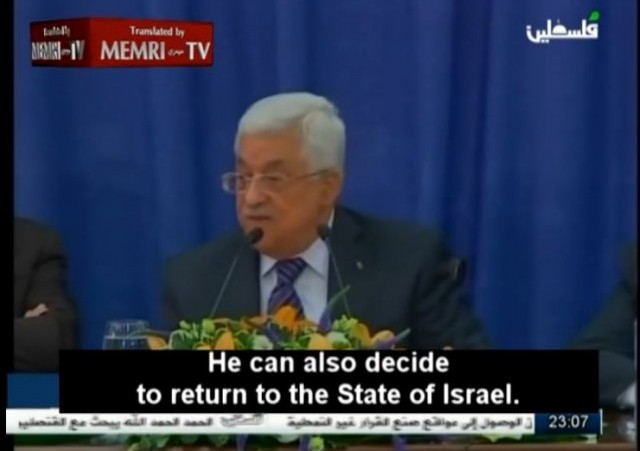 The announcement recently by Mahmoud Abbas that the Palestinians never, ever would recognize a Jewish state garnered plenty of headlines. It quickly was followed up by a similar announcement from the Arab League and Fatah party.

Watch this speech by Abbas, which led to the headlines, and read the text.

It appears that the peace negotiations were a farce from the get-go.

Abbas is in favor of the 1 1/2 state solution — one for the Palestinians in the West Bank and Gaza, and another half a Palestinian state within Israel itself through the unfettered and unrestricted “return” of 1948 refugess in the war started by the Arab plus their descendents.

It is clear that any peace deal only is a first step. Abbas, the supposedly most moderate Palestinian leader Israel is likely to see (according to Obama-Kerry), does not accept a Jewish national entity. That’s the bottom line.

Mahmoud Abbas: “Our position is that the settlements – from start to finish – are illegal. They talk about settlement blocs, or about settlements here and there, but we say that every house and every stone that were placed in the West Bank since 1967 and to this day are illegal and we do not recognize them.” […]

“No resolution that we agree upon with the others will be passed unless it is confirmed by popular referendum of all the Palestinians worldwide.”

“Every Palestinian, from Canada to Japan – that includes the Palestinians living abroad as well – will have to agree on the proposal. They will vote in favor or against. If they say “no,” the proposal will not pass.” […]

“The Right of Return is a personal right. If you are a refugee, your son is a refugee as well. Perhaps you will decide to relinquish this right while your son decides not to, or vice versa. Your son is free to do so. When we say that this is a personal choice, it means that he can decide for himself. We will all be making a choice: One option is to remain where we are – in Jordan, in Syria, in Lebanon, and so on – and receive compensation…Of course…

“The second option is to go to another country, as part of an agreement. If someone wants to emigrate to Canada, he is free to do so. Wherever one goes, one remains a Palestinian. In this case, he will receive compensation as well.

“The third option is to decide to return to the Palestinian state, and to receive compensation.

“He can also decide to return to the State of Israel. In such a case, he will receive compensation and return.

“All the refugees who number 5 million today, along with their offspring, are considered 1948 refugees. There are no refugees who came from Nablus or Ramallah. They are all from Tiberius, Safed, Acre, Nazareth, Jaffa, Beersheba, and so on.” […]

“What we do not want to accept is the ‘Jewish state.’ We shall never agree to recognize the Jewish state.”

Update: This article by The Gatestone Institute explains that Abbas has positioned himself so that he cannot make any meaningful concessions — deliberately … and how Obama probably doesn’t care:

The Arab League support is exceedingly important for Abbas: it gives him the power and energy to resist any pressure from Obama to soften or change his position.

The Arab league’s announcement came after a meeting of its foreign ministers, in Cairo, attended by Palestinian Authority Foreign Minister Riad Malki, who urged his counterparts to show their support for Abbas on the eve of his meeting with Obama, scheduled to take place in Washington on March 17.

The Arab League announcement allows Abbas to turn down any request from Obama under the pretext that he is not authorized by the Arab countries to make any concessions.

Obama should therefore not expect to hear anything new from Abbas, who continues to insist there will be no peace agreement until Israel and the U.S. comply with all his demands.

By requesting the backing of the Arab countries, Abbas is seeking to show Obama and U.S. Secretary of State John Kerry that there is no point in exerting pressure on him because the Arab countries will not accept any concessions to Israel.

Abbas has actually tied his own hands before the meeting as a way of avoiding pressure.

Abbas’s predecessor, Yasser Arafat, resorted to the same tactic during the miscalculated Camp David summit in the summer of 2000. Then, Arafat too claimed that he did not have a mandate from the Arab and Islamic countries to make concessions to Israel and that was why he would not be able to strike a deal.

The Arab League announcement also allows Abbas to tell Obama that he is speaking not only on behalf of Palestinians, but the entire Arab world as well. However, many Palestinians would argue that Abbas does not even have a mandate from his people to negotiate, let alone sign, any peace agreement with Israel.

But the Obama Administration does not really seem to care whether Abbas, who recently entered the 10th year of his four-year term in office, is authorized by his people to sign a deal with Israel. Obama and Kerry seem to want a deal at any cost, even if it is with a president who lost his legitimacy many years ago and even if the deal will unravel the day after.

Israel needs to stop participating in these joke negotiations, and needs to stop letting spineless hacks like Obama and Kerry pressure them into giving up concessions.

Israel needs to set a bottom line. They will not enter into negotiations or give up another concession, no matter how small, until Palestine officially recognizes Israel has a right to exist as a state.

Borders and settlements can be negotiated later. First, either Palestine acknowledges that Israel has a right to exist in some form, or they can pound sand.

Enough with these farce ‘peace’ negotiations.

Solution:
1. No Palestinian State
2. West Bank, Gaza, Golan Heights back to Israel
3. All of Judea and Samaria to Israel
4. Israel borders back to King David/Solomon/biblical locations
5. Deport every so-called Palestinian who acts up along with his entire family.

This document must be repudiated. Then actual negotiations may go forward.

The Hamas Covenant states with painful clarity the Palestinian intention to engage in bad-faith negotiations.

It is also full to the brim with slanders against Islam and Allah that, if credited, would fully justify the contempt expressed by people of other religions against Islam. It’s not Islamophobia, if you take the Palestinians at their word.

Time for the Palestinians to get out of the Jewish State. Now.

“…We will all be making a choice: One option is to remain where we are – in Jordan, in Syria, in Lebanon, and so on – and receive compensation…Of course…”

Of course. Here is my pat on the back.

I agree with where Abbas is going with this, time to recognize the so called palestinians as the Egyptian and Syrian Refugees as they truly are.

Israel should just tell the Palestinians to “give us a call” when they are willing to accept Israel as a Jewish state. Until then – why waste everyone’s time.

Abbas: I do not recognize Israels right to exist!
Netanyahu: OK. The next time I see you I will shoot you.

And today there are reports of missiles fired into Israel from Gaza. Of course, I’m sure this is to get Israel to retaliate so the news can focus on Israeli “aggression.”