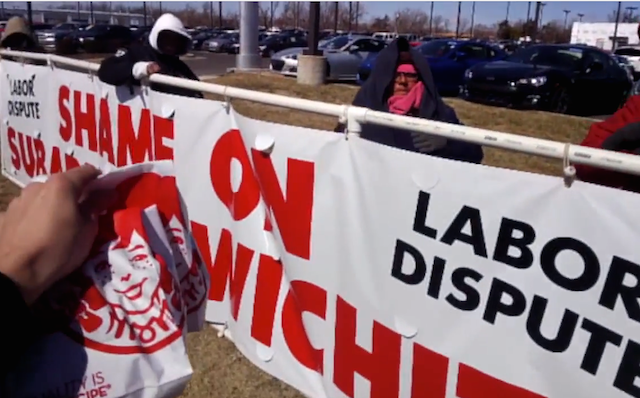 It has been a longstanding tactic of labor organizations to protest in front of places of business in order to draw attention to union grievances, as well as to deter potential customers from utilizing the establishment.

The vigor of these protests can range anywhere from a wild raucous affair, to the downright sad and pathetic.

This time, however, one Wichita area Subaru dealership has managed to turn a union protest into a funny form of free advertisement.

According to The Wichita Eagle, the United Brotherhood Of Carpenters And Joiners Of America Local 201 began a standard protest outside Subaru of Wichita last week with a “Shame on Subaru of Wichita” sign legally placed on the highway right-of-way in front of the dealership. (The union, which has not specified its exact complaint, may have been upset that the dealership’s contractor hired a non-union shop for renovations.)

The dealership responded instead with its own sign, turning the union’s charge into one of “having unbeatable prices.” Because the sign rests in the right-of-way, neither sign can be anchored in the ground — they must be held up by people, which Subaru of Wichita says on its Facebook page has been handled by student volunteers so far. (Other carpentry unions often recruit and pay their protestors, since the carpenters themselves have jobs to fill.)

This isn’t the first time the union has engaged in intimidation campaigns similar to this.

In early 2013, again citing vague grievances about noncompliance with “area labor standards,” there were a handful of similar incidents in the Wichita area.

The Carpenters Local 201 are behind the signs and protests outside of Wichita State, the YMCA, and Central Christian Church to name a few. They claim non-union contractors aren’t paying standard wages and benefits for the area.

His drywall company is the reason protesters stand outside Wichita State.  He received a letter from the union claiming it investigated the wages and benefits he pays. That investigation, the letter says, concluded wages and benefits Satterfield pays are less than the established area standard.

And how exactly do these unions conduct these so-called investigations of private companies? In a word: hearsay.

“We verify in the field with the workers,” says the protester.  He wouldn’t say how much the workers are paid, or what is considered a “fair wage.”

Clearly, this union is nothing new to Wichita area residents and businesses.

It’s nice to see one company has been able to find a clever, lighthearted way around these classic labor intimidation tactics.

Indeed, the car dealership’s signs were so successful that the union decided to move their sign to the other side of the right-of-way, so the Subaru counter-protest sign would no longer make sense.

Well, Subaru of Wichita found a way around that, too.

And on goes the “Shame On” shuffle.

Great move!! Creative thinking can lead to great results. Republicans could learn a lesson from this type approach. Turning the tables on someone is often the best tactic. Plus it drives the other side crazy.

Question: Is the “unfair wage” really unfair, or just less than a union shop pays?

For example (throwing out some purely hypothetical numbers), does the non-union shop pay 5% less than a union shop pays, but the workers don’t complain because they don’t have to give up 10% in union dues?

Also, would it be possible for the non-union workers to troll the union by reporting a lower wage than they’re actually being paid? (Relatedly, wouldn’t the union look really silly if the actual numbers were then made public?)

In capitalism terms, a “fair wage” is whatever the employer and employee agree on. Normal people don’t need an overbearing nanny (a.k.a. a “union rep”) telling them how much they should be paid. Most people can figure that out themselves.

The TRUTH is most likely the union has no idea what workers for non-union contractors are being paid.

The claim they “verify it with workers in the field” is baloney. The contractors work for private companies and private homeowners, do you think they just let strangers wander onto their property and distract the workers they are paying for?

And do you suppose the workers would volunteer their wages to some stranger?

No, they are just protesting the use of non-union labor and contractors. They have no idea what the pay rate is.

Archer, let me try to answer your question. A “fair wage” is whatever the market says it is. Whether or not an employee and an employer agree to this number is up to the negotiation skills of each party – it pays to be prepared.

Unions don’t really care about wages, nor benefits. They will say they do, because these are hot button topics that play well on TV. What they care most about is Revenue, which they get in the form of dues from members (and some other things which I can relate at another time). So they need lots of members. Which means the 2nd most important topic for unions is Policy. They want policies which restrict the free movement of labor, restrict teamwork, and force employers to enact procedures which limit efficiency in the name of hiring more employees. They lobby politicians, and debate terms with employers, to gain more members. More members, more revenue. More revenue, more lobbying. More lobbying, more Policy. More Policy, more members. See how this works?

To be fair, the employers do the same. They simply have different goals. And THAT is the point. Unions in America do not share the goals of the company, and that hurts progress. I believe the labor movement has jumped the shark in the private sector, which is why it is currently struggling for solvency and trying to find new markets for their “product”. I wish them luck, because they are largely no longer needed.

The laws enacted during the 20th century largely mimicked what the unions had proposed. Most of the work rules we now enjoy were demands made by unions, and the commonality of work rules limits the value unions can provide. The average employee simply doesn’t need them anymore.

There is still a large responsibility incumbent upon leaders. Leaders must take their employees’ need into account at all times. For any situation, leader must drive their organizations with skill, firmness and discipline, but also temper their actions with tact, dignity and honor. The contemporary organization must be one where knowledge and creativity are borne out in all parts of the organization, and teamwork and common goal achievement are rewarded. Such an organization would be nearly impervious to union interest.

Sorry to get on a bit of a rant. I’ve worked in union and non-union workplaces, and all over the world. I’ve tried the things I’ve described more than once, and very successfully. It’s a joy to behold an organization on the same page, working and collaborating, with little regard for whose ideas are the best ones but always rewarding the team for its achievement. This CAN be done!

The left absolutely hates the freedom of association as in “the right of the people peaceably to assemble” with whom each person may choose.

Or the freedom to speak without interference. Or the right to worship. And so forth.

Leftists (who lie about being liberal) are lying sociopaths.

They lie about everything. Remember that.

The owner of the dealership is probably a ‘pub $ donor.

Providing a discordant note here, contractor unions have been by passed in California by illegal immigrants, which has led to far worse problems than higher contracting fees – like virtually eliminating Republican power in the state. The extent of this can be measured by checking out power tools at the local hardware store – the main language on the boxes and instructions are in spanish. Frankly, I’d go with contractor unions over massive immigration.

False dichotomy – those aren’t the only two choices. Kill both illegal immigration and unions.

But Barry and Michelle, the entire 1%, like their cheap illegal nannies and gardners and etc. etc. etc…..

Love this. Making lemonade from lemons.