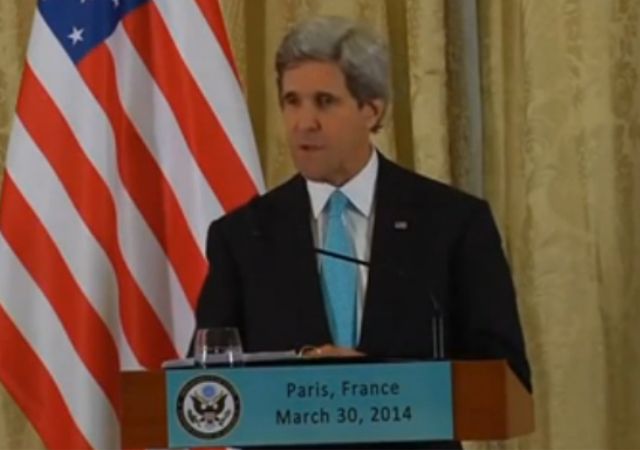 U.S. Secretary of State John Kerry met with Russian Foreign Minister Sergey Lavrov for about four hours on Sunday, where they discussed the situation in Ukraine and reportedly agreed at least on the need for a diplomatic solution.

Secretary of State John Kerry says the Russian buildup of troops on its border with Ukraine is creating a climate of fear and intimidation in that country.

Kerry spoke after meeting Sunday night in Paris with Russian Foreign MinisterSergey Lavrov and said he told the diplomat that Ukrainians must be the ones who decide their own future.

“The United States is is [sic] consulting with Ukraine at every step of this process, and we will not accept the path forward if the legitimate government of Ukraine is not at the table,” Kerry said.

Kerry described his talks with the Russian diplomat as “a frank conversation” about Russia’s moves in Crimea and the large gathering of troops along the border with Ukraine.

“I made clear the United States still considers the Russian actions to be illegal and illegitimate,” Kerry said.

Russia wants the former Soviet republic to be unified in a federation allowing wide regional autonomy. Lavrov, in a Saturday interview on Russian-controlled TV, made clear that Moscow believes a federation is the only way to guarantee Ukraine’s neutrality.

“We can’t see any other way to ensure the stable development of Ukraine but to sign a federal agreement,” Lavrov said in the interview, adding he understood the United States was open to the idea. He reiterated Russian claims that the deployment of tens of thousands of troops near the Ukraine border were solely to conduct military exercises.

“We have absolutely no intention of, or interest in, crossing Ukraine’s borders,” Lavrov said.

Sunday’s talks followed a phone call from Russian President Vladimir Putin to President Obama Friday.  Kerry in turn diverted his trip home from the Middle East to travel to Paris for the meeting with Lavrov.

Reports on the meeting were just coming in at the time of this writing. If there are any other significant updates, we’ll update this post.

I’m sorry, but what is with the UN blue tie and the UN blue placard on the podium? John “Ghengis Kahn” Kerry is utterly inept.

[For future reference, UN Blue is specified as Pantone #279. Run right out and get some!]

Lavrov: “Comrade President, I can confirm exactly what you predicted. No evidence whatsoever on the pathetic Kerry that
he possesses any gonads–what the Americans call Balls.”

Putin: “Yes. And, once again, I found only a silly testicular concavity on the Obama. I can assure you,
Comrade Minister, that the Texan who preceded him had
a Russia size set of the Balls and made it clear that testing his resolve would be costly.”

Lavrov: “Yes, the infinite wisdom of the American electorate has seen fit to give us the gift of two clowns.”

Putin: “BWHAAAAAAAAAAAAAAAaaaaaaaa..!! I can happily assure you, Comrade, that there is a full chorus of clowns singing soprano for Mister Obama.”

So they “agreed on the need for a diplomatic settlement” but just not what it would be, but the US is “open” to restructuring Ukraine, a sovereign nation with its own constitution whose border integrity we promised to guarantee?

Translation: John Kerry asks Lavrov just how far Obama needs to bend over for Putin. Putin will probably request Obama squeal like a pig. Then, voila! Peace in our time!

Kerry spent a lot of time denying that the US could, would, or should agree to anything regarding Ukraine without “the legitimate government of Ukraine at the table” and “no talks on Ukraine without Ukraine”.

Legitimate government, is it? At the very least have an election first. The US is very coy about which post-coup regimes it recognizes as legitimate and which it does not.

I suspect in this case “legitimate government” talk is an out.

Didn’t the United States of America sign the Geneva Conventions on torture? Then why are we making this Lavrov guy talk to Kerry for 4 hours? What did he do to deserves such punishment and abuse? What about those conventions not to torture people? 0bama did the same thing to Karzi a few months ago. Not as bad as water boarding, but right next to sleep deprivation.

Not as bad as waterboarding??? I’d call it a fate worse than death!!!

John Kerry is a self-promoting liar.

Gag me with the hugest spoon in the kitchen, as my retro-valley girl niece says.

The Ukrainian crisis began when the US/EU decided they would rather support a coup d’etat than wait for the next round of elections. Ironically, given the dissatisfaction with the Yanukovych government, the pro-western factions would likely have one that election, and the current turmoil could have been avoided. But, the US/EU blunder allowed Russia (NOT Putin) to realize one long-standing goal, to reunite Crimea with Russia. That is a done deal which cannot and will not be undone.

The US/EU have continued their blunders by climbing an escalation ladder that leads inevitably to war. Russia has offered a deal that lets them climb down and that gives Russia essentially all it wants: an unaligned, federal Ukraine whose economic disaster becomes the inheritance of the EU. The US/EU will eventually accept the deal with a few face-saving but insubstantial modifications, and the current sanctions will quietly disappear.